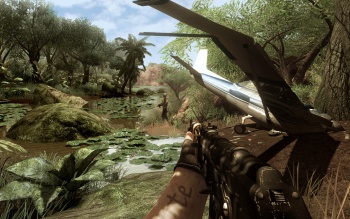 Far Cry 2‘s Africa is confusing. One minute, a guy’s trying to replace your brain with a wad of bullets; the next, he’s in your house shouting “hell yeah!” and doing crunches on your floor. This is madness. This is chaos. This is nothing like the original Far Cry.

It’s a shame, too, because I came into Far Cry 2 with the doe-eyed innocence of a fresh-off-the-Greyhound Midwestern girl in Hollywood. “Gee whiz,” I whispered aloud as the game’s first loading screen wheezed out its final breaths. “A huge African playground, chock full of explosions, adventures, cars and potential pals – all just waiting for me!”

My optimism was quickly doused in gasoline, set on fire and pursued by heat-seeking missiles.

Far Cry 2‘s first mission saw me shaking off a pesky bout of unconsciousness that caught me square on the jaw during a conversation with main antagonist, “the Jackal,” an arms dealer and, apparently, a bit of a jerk. When not pummeling the player with exposition, the Jackal just loves poking a long, bullet-spewing stick into Far Cry 2‘s raging hornets’ nest of a fictional civil war. See, the Jackal supplies death-dealing ordnance to both sides of the war. Topple the cat who walks like a man and you end the war.

How does one find the Jackal? Well, since the game’s two opposing factions meet with the guy on a regular basis, why not do a little of their dirty work in exchange for info on his whereabouts? Just pick a faction and dive in. As a bonus, after you’ve whizzed through your first mission, you pretty much know all there is to know about Far Cry 2‘s quest system. Just find a vehicle, drive a few hundred feet, let roving enemies shoot your car until it putters to a halt (don’t worry, they never miss), foot it to your mission location, kill some guys (a very frequent objective), find a car, deal with more roving enemies and hobble back to the quest giver.

Everyone in Far Cry 2‘s Africa hates you – specifically and only you. Once they spot you, these natives will bid farewell to their original destinations, train their Jeep-powered reverse tractor beams onto your car’s rear bumper and go to town – without any knowledge of your identity and for no apparent reason. Occasional respite from these assailants comes in neutral towns and safe houses, but any other hill, road, shack or checkpoint – which, cumulatively, compose, you know, the entire game – is the potential site of another bloody stand-off.

Since Ubisoft constructed a sprawling game world with a few scattered bus stops as your sole means of fast travel, you’ll be stuck behind the wheel of three different car models for a depressingly large amount of time. At least, until random enemies rain from the sky or erupt from a fissure in the ground and reduce your vehicle’s effectiveness to that of a two-wheeled tricycle. 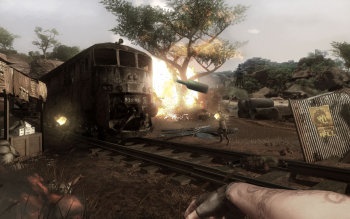 But don’t worry; you have help. Sort of. Just let other mercenaries of questionable moral character gab at you for a while and you’re thick as thieves. These mercenaries, known as “buddies,” can perform a wide range of functions, from handing out advice during missions to saving your life. On the one hand, they’re a tad more useful than real-life friends, but sadly, with great utility comes a swaying stack of annoyance. Buddies are needy (please stop calling me), downright mean, and highly susceptible to bullets. They’re also your creepy safe-housemates, watching you sleep, busting out sets of crunches on your floor and inexplicably shouting “hell yeah!” at inappropriate times. Unfortunately, you need them to upgrade your safe houses, so barreling into them with two tons of Tonka-tough steel isn’t in your best interest.

Together, the overly aggressive natives and obnoxious “buddies” make up Far Cry 2‘s biggest issue: the lack of any emotional hook. Ubisoft may have meticulously constructed a living, breathing game world, but it’s hard to get all mushy over it when everyone’s either out to kill you or bump chests. I understand the developers were trying to weave a Heart of Darkness-style moral into their story, but they’re no Joseph Conrad. Instead, the whole thing feels hollow, which makes the natives’ inexplicable desire to murder you even harder to swallow.

What’s actually fun about Far Cry 2? Well, it has a metric oodle of weaponry, with more unlocked as you complete missions for the weapon salesman. Granted, “unlocking” is Far Cry-ese for “more repetitive grunt work,” but the sheer variety of weapons you’ll nab makes up for it. Before long, with an armory’s worth of guns and grenades in tow, firefights become a form of self-expression. Will you blend brains with a sniper rifle and send enemies into a jittery (and frequently glitchy) panic, or will you brazenly flip the bird in Smokey Bear’s direction and set the whole area aflame? It’s all up to you.

But with spotty A.I., bland, samey battlefields and miles of driving, the game goes from great to grating. And for a title as big as Far Cry 2, that just doesn’t cut it. The game could’ve been amazing, but instead it’s this year’s Assassin’s Creed – top-notch world, substandard gameplay.

Bottom line: Far Cry 2 packs plenty of content – a huge world, tons of missions and weapons – but the repetitive tasks and constantly respawning enemies make the gameplay a bit of a chore..

Recommendation: Rent it. There’s some fun to be had here, but the game’s only one pack of screaming children away from being a soccer mom driving-simulator.

Nathan Grayson had no idea it was “Smokey Bear” and not “Smokey the Bear.” Now his entire perception of life has been called into question.