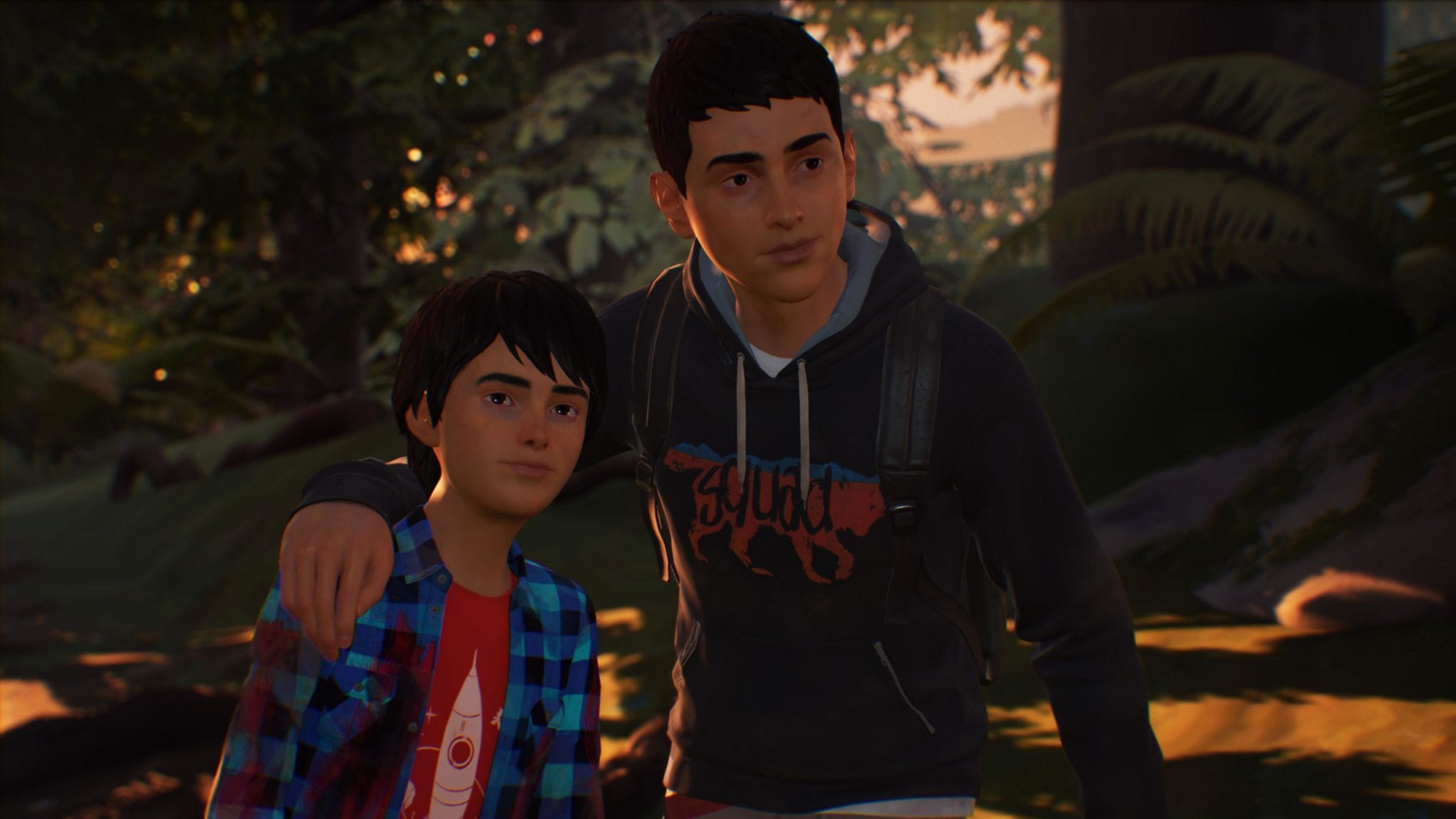 I was on a mission to help Sean Diaz prepare for a Halloween party. As I guided him around his house, rummaging for the supplies he’d need — snacks, drinks, a blanket he could offer his crush if the night got chilly — I stopped to take in all the details the designers of Life Is Strange 2 had tucked around the digital space. Like any impatient teenager he would periodically remind me that he had someplace to be. I could have had him sit on his beanbag chair and sketch his room. I could have had him look at more of the pictures his dad displayed in the garage. But I wanted to get to the party, too. I thought I’d have more time to take everything in. I was wrong.

The first section of Life Is Strange 2 ends dramatically. An accident involving Sean’s kid brother Daniel spilling fake blood on the Diaz’s racist asshole neighbor leads to an altercation with a scared police officer and the manifestation of Daniel’s destructive supernatural power. Two people wind up dead, and the brothers go on the lam. Even though I’d only spent a short amount of time interacting with Sean’s best friend, his father, and exploring his home, knowing I would likely never see them again produced a powerful feeling of loss.

Life Is Strange 2 is an entirely different story from the original. It also plays very differently. Life Is Strange focused on using its hero’s time-rewinding powers to solve problems and help people. Those powers always seemed most tempting when players saw an animation indicating that a decision they made would have lasting consequences. You could immediately go back and make the other choice and see what happens. The animation cues still exist in Life Is Strange 2, but now there’s no way to undo a decision without reloading a save game. But as was true with the original game, there’s no way to tell exactly what the far-reaching consequences of your choices will be. At one point, I was worried I had missed my chance to have the Diaz brothers adopt a puppy to take on their adventures, which would definitely force me to restart the game. (Luckily things worked out anyways.)

“Everything is political,” a traveling journalist and activist tells Sean when he gives the brothers a ride. Life Is Strange 2 certainly is.

There are some timed challenges, like a point where you have to spot Daniel about to eat berries in the woods and get there quickly to make sure they’re safe. You’ll also want to take in all your surroundings. Spending time snooping around can provide advantages later on. But otherwise this is a straight narrative game with a somewhat linear story. At some points I felt like my choices didn’t matter enough or I didn’t have enough agency. Critically low on cash, I’d been sorely tempted to swipe some supplies from a gas station convenience store, but resisted. I thought my restraint would be rewarded when someone accused me of shoplifting and I knew I could prove them wrong, but the outcome was still terrible. Another time it was obvious how a situation would go, and despite my attempts to prevent it from happening, it ended in a scripted disaster. If I’m guiding Sean’s decisions, I’d like to be able to make some better ones.

What Life Is Strange 2 lacks in actual gameplay, it makes up for with the power of its story. The game provides an intimate exploration of the relationship between brothers as Sean works to makes Daniel feel safe, needed, and loved while also providing for his basic needs. As Sean observes the world around him, he can choose what to share with his brother, bringing him joy by pointing out a bird’s nest or raccoon in their hike through the forest. There’s so much nuance in the way the two interact. The animations of Sean helping Daniel over an obstacle display a beautiful tenderness, but Sean can easily hurt his little brother with a casual barb or a well-intentioned lie. Many of the choices you make involve how Sean treats Daniel, like whether he chooses to join a stick battle against a tree on his brother’s side or spar against him. If he decides to steal it could set a bad example for Daniel, but it also ensures he gets enough to eat. The moments of joy the two share provide a vital contrast to the game’s heavy story.

“Everything is political,” a traveling journalist and activist tells Sean when he gives the brothers a ride. Life Is Strange 2 certainly is. The story begins just weeks before the 2016 presidential election and within the first of five promised episodes the Mexican-American protagonists are told to go back to their country and hit with racial slurs as a precursor to an actual physical assault. Then there’s the fact that the story prominently features an unarmed man of color being fatally shot by a police officer. Things get dramatically worse for the Diaz brothers before Election Day, but it’s not likely to get any easier as the story unfolds.

They do have an unexpected weapon on their side. A brief post-credits scene at the very end of the first chapter hints that Daniel is gaining control of his abilities and might even be able to use them to help in the next chapter. It’s sure to be exciting to see his power grow, but what Life Is Strange 2 has already shown is that the brothers’ greatest strength is their bond with each other.

After the tragedy of the first section of Life Is Strange 2, I learned to take my time with the game. I want to soak in every detail and not rush to complete my quest objectives and risk missing out on learning about the people around me — especially Daniel. What makes Life Is Strange 2 so extraordinary is that I’m just as upset about missing out on learning more about Sean and Daniel’s dad as I would be if I learned there was a powerful item hiding in a drawer I hadn’t bothered to check in a standard RPG. I know I have a limited amount of time with the Diaz brothers and I want to make the most of it.

This game was reviewed on Steam using code provided by the publisher.