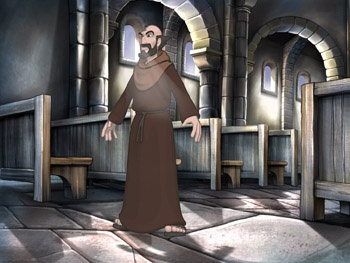 It turns out there is another crime to be solved in adventure game Murder in the Abbey besides the one implied by its title. Apparently, someone has stolen all the fun.

Other components appear to be in place. It’s got nice hand-drawn graphics that evoke classic Disney animation, a cinema-style score performed by the City of Prague Philharmonic Orchestra, and a setting that hasn’t been done a million times. There’s just the small matter of the game being a tedious grind to play, that’s all.

Like too many 21st-century adventure game developers, the team at Alcachofa Soft, led by Emilio de Paz, doesn’t seem to know what puts the fun in a good adventure game. They’ve lost the art of crafting engaging puzzles that challenge and reward a player’s ingenuity. What we get instead are boring chores and errands trying to disguise themselves as puzzles and pulling it off about as well as an NFL offensive lineman attempting to cosplay as Princess Peach.

You play as Leonardo, the leader of a group of mutated turtles trained in the martial arts. No wait, that’s the game I wish I had played. The Leonardo in Murder in the Abbey is a medieval monk who’s asked to investigate a suspicious accidental death while visiting a remote and possibly haunted mountaintop abbey. It’s supposed to be a mystery game, but the exciting possibility of getting to hunt down clues, inspect evidence and inch closer to the truth is quickly diminished by the lame tasks the game makes you do instead.

It seems every monk at the abbey has a list of items that need to be retrieved; before you can get any useful information from any of them, you’ll be pixel-hunting your eyeballs out trying to find the plant seeds, quills, bowls of soup and other random nouns they want. Almost every time you’re on the verge of gaining some information about the mystery and the game threatens to get exciting, you’re slapped in the face with a silly quest to complete first. They’re not puzzles, they’re jobs. And jobs are not fun.
Other game designers craft their gameplay to match their subject matter. The Hitman games let you feel like a hitman, Tomb Raiderlets you believe you’re raiding tombs, and Flight Simulator simulates flight. Murder in the Abbey fails because it doesn’t let you feel like a detective solving a murder mystery.

There is one moment when it does. You investigate a stone carving and after finding the proper clues, you can deduce the significance of certain features on the carving. For the five minutes I spent playing that part, I loved it. It was exactly what I had hoped the rest of the game’s five hours would be. It was a genuine puzzle and not merely the arbitrary inventory-gathering and NPC-placating that plagues the adventure genre. 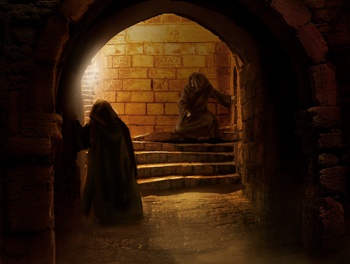 Murder in the Abbey just wasn’t designed to be anything more than generic. A huge amount of the game involves questioning other characters, but you’re not given an interface by which you can do this meaningfully. Instead, players get the standard “click on the dialogue you want to say” scheme that doesn’t let us affect the outcome of a conversation. You can’t ask the questions you want answered, just the ones the game will let you ask. Alcachofa Soft should have implemented some kind of dynamic interview system where the conversation choices players made would alter the responses given and provide you with differing levels of clues. By the end of the game, the big reveal comes out of nowhere with Leonardo having deduced the mystery’s solution without any assistance from the player. We barely ever get to feel like we’re participating in the investigation, just witnessing it. That’s a big failing.

Alcachofa Soft relies on a bullet-list of current adventure game clichés, the same ones that turn off everybody except hardcore adventure game fans. For example, players can barely interact with the environment. Limited hotspots can be left-clicked for a description and right-clicked for an action. That’s it. Some items can be picked up. Some can’t. Who knows why? Leonardo just tells you, “I don’t think it’s important,” when he won’t interact with what you’ve clicked on. And it makes you want to punch him in the face.

Along with the disappointing gameplay, Murder in the Abbey has some distracting bugs, too. A lack of collision detection means the head of Leonardo’s teenage sidekick Bruno will often protrude hilariously from the monk’s crotch when they stand close together. During one conversation, a character spoke while facing the wrong direction, ruining a dramatic scene by turning it into a farce. Often, dialogue cuts out or the wrong voice comes from a character’s mouth. Also, while technically not a bug, the voice acting for Bruno is so bad that it’s worth pausing the game, switching subtitles on and muting the voice volume whenever it looks like he’s about to speak.

Other elements of the game show promise. The graphics are gorgeous-the game’s cel-shaded 3D character models look great among the hand-drawn backgrounds. Character close-ups during conversations are accompanied by revealing facial expressions, which are a nice change from the usual marionette-style presentation of most adventure games. Murder in the Abbey‘s plot, though it shamelessly steals from Umberto Eco’s novel The Name of the Rose, is engaging and touches on interesting themes of evil, asking whether people can escape from it by hiding away from the outside world. These positives aren’t nearly enough to compensate for the monotonous and dreary gameplay, though.

Bottom Line: Nothing ever draws you into the investigation to let you feel like you’re solving a crime. Murder in the Abbey doesn’t deliver anything more than a generic adventure game experience.

Recommendation: Only for adventure game completists.