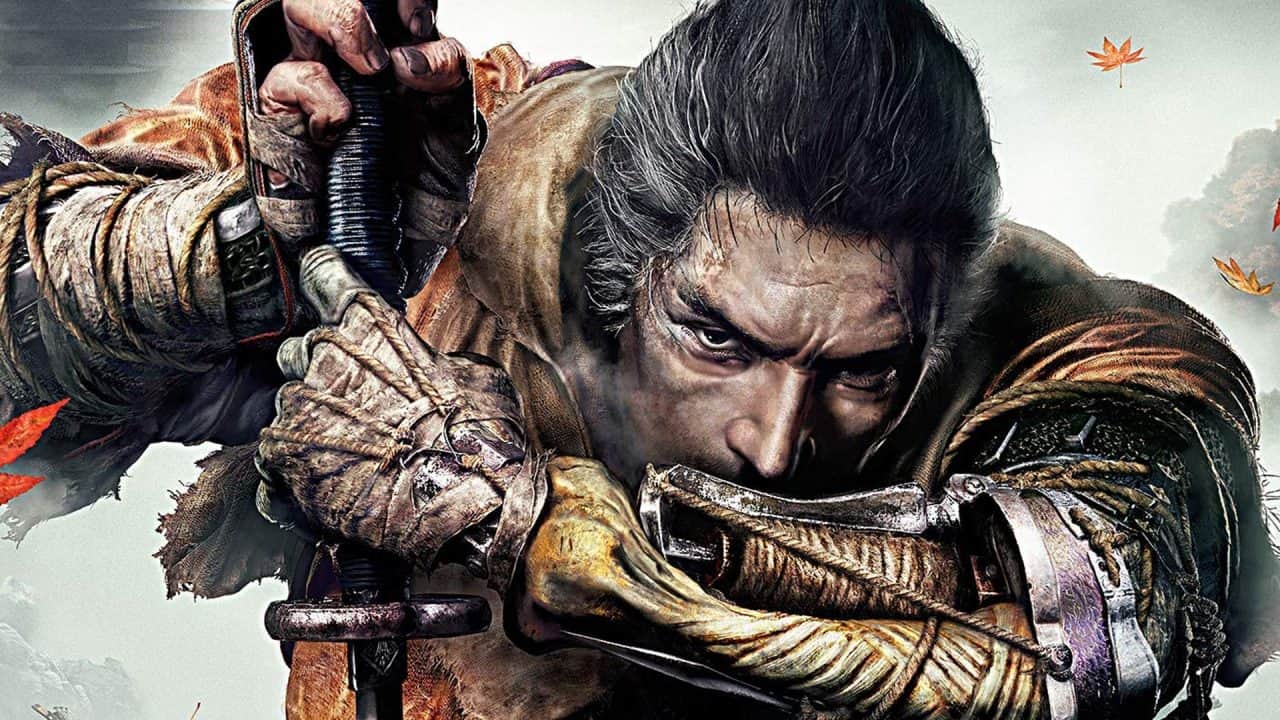 “I just want you to know: I hate-respect you.” I think about Alec Baldwin saying these words to a dramatically lit Will Arnett on an early episode of 30 Rock approximately 82,000 times a day. It’s a little Zen Buddhist koan I use to rein in my critical brain when I experience revulsion. Two things can be true. A work of art can be brilliant in theme and craft, but you can also detest it. If you’re going to spend your life digging through the guts of creation to try and describe what it all means to the human soul, it’s vital to embrace this seemingly contradictory truth. Just because you don’t like something, doesn’t mean it’s bad.

Just absolutely loathe it. The punishing Groundhog Day masochism of throwing myself at an octogenarian ninja witch waiting in a basement that is perpetually on fire over and over  for hours just so I can progress a little farther into the game is not my definition of a good time. Nor is gleefully ninjaing my way across snow-covered gullies, my grappling hook hurling my fantastic warrior body through air and onto thunking wooden branches with delicious fluid ease and dreamy weight, only to land in a cave where a headless fat man stabs me to death before I know what’s going on. Sekiro is, like many games made by developer From Software, a cruel prankster that’s often hilarious but a god damn burden when it punks you for the 90th time in a single hour.

From Software and director Hidetaka Miyazaki spent the decade prior to Sekiro experimenting with and evolving a very specific style of imaginary space. The landscapes in all of the games in Sekiro’s lineage — from 2009’s Demon’s Souls on PlayStation 3, the ubiquitous Dark Souls trilogy, and up through 2014’s Bloodborne — are remarkable for how they balance their own contradictions. As with the rest of those games, Sekiro’s vision of feudal Japan is equally painterly and pulpy. It’s vast and interconnected, but also cramped with the intent to guide you along specific paths. Its combat, exploration, and invitation to sneak across peaks and pagodas on your journey are all rigid to the point of brittleness, but they still lend themselves to creative experimentation.

Sekiro may have jettisoned the fiddly character customization of From Software’s previous games — doomed lead character Wolf grows stronger and gains new tools and abilities as you progress, but there’s no intricate stat tweaking — but their philosophy is otherwise perfected here. From Software’s universe is cruel, funny, gorgeous, full, and enchantingly oblique, taking players on a journey through a samurai kingdom overrun with faithless warlords and monsters. You must understand what’s going on in order to survive, a heavy, sometimes unbearable, burden placed squarely on your shoulders. The rewards are always the same. You experience a peerless endorphin rush from succeeding and then get to see and touch more of the game space.

You can practically hear the future RZA songs that will sample Wolf’s clipped conversations with ninja master Owl.

From almost the moment I started playing the game, I caught myself repeatedly muttering, “Wow. That is some proper ninja shit.” Sekiro follows  the grand tradition of majestic and bleak 1970s manga and movies like Lady Snowblood by romanticizing Japan’s Sengoku period, and embraces all the tropes those earlier works laid out. There’s the orphaned hero indebted to both paternal warriors and a fading noble family house, a seemingly unstoppable evil military leader who turns out to not be the true threat, and a world full of both terrestrial and supernatural (but still somehow earthy) threats. Playing the game, you can practically hear the future RZA songs that will sample Wolf’s clipped conversations with ninja master Owl, the undying warrior Wolf can use to practice his deadly skills on, or the moody monologues of villains like Lady Butterfly. (She’s that ninja witch I mentioned before, one of a handful of bosses you can try to topple first in the game. With tactics including vanishing, leaping off of razor trip wires, and tossing kunai, she is, like everything else in the game, proper ninja shit.)

Genre archetypes and From Software’s established creative idiosyncrasies are the bricks Sekiro is built out of, but the mortar sealing them together is an ineffable immediacy that’s absent from Miyazaki’s other games. Playing Dark Souls or Bloodborne, I was always haunted by the notion that I wasn’t playing the game correctly or that I was making choices with my precious resources that would limit my ability to progress later on or force me to call on other players online to assist me. By excising the option to customize your character down to minute, obscure stats, restricting you to playing entirely by yourself, and making Wolf himself a more lithe, responsive character to control, Sekiro makes entering its world seamless and intoxicating. 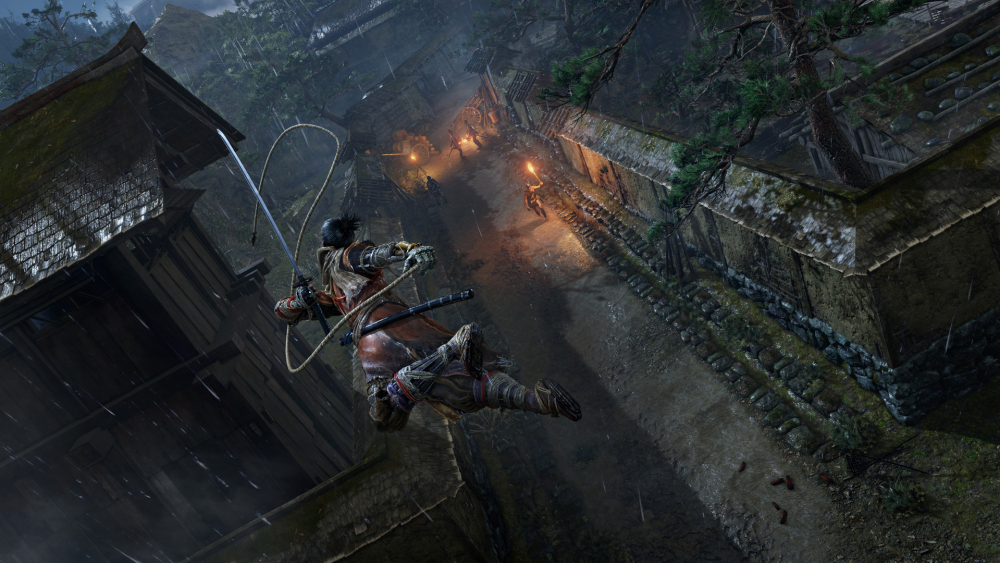 Rather than feeling like I was doing something wrong, I instead immediately understood how to sneak through grass, leap over treetops, and slice up an unusually beefy and aggressive chicken when I came across one. (I’m not sure why all the chickens in Sekiro are such assholes, but it’s just one more thing that makes the world so convincingly fleshed out.) The scale of the game is starkly contrasted by how organically you experience its most bizarre and thrilling moments. Early in the game, as you casually explore a path to the fallen Ashina clan castle, you go from just walking forward to having to navigate around a snake the size of an Amtrak commuter train and just about as angry as its passengers. Sekiro doesn’t telegraph that something wild and dangerous is about to happen. It just happens. While From Software have made moments like these a calling card over the past decade, Sekiro is enskied by how easy it is to start encountering them.

If only it were so easy to keep playing, I would unequivocally love the game. As inviting as it is to anyone that comes up to its threshold, Sekiro is equally willing to throw them back out. Swordplay is actually simple in comparison to other combat-centric games like Devil May Cry 5 or even God of War. Wolf can dodge, jump, grapple, slice, use tools affixed to his versatile, medieval prosthetic arm, and block. Each of these maneuvers is mapped to a single button on the controller. The ultimate goal of every encounter, whether its with a lowly archer or a towering, poison-spewing ogre, is to block incoming strikes and strike back enough to break your opponents’ guard. Complex button input combinations aren’t the name of the game here; victory comes from patience and precision. But Sekiro is like Pai Mei from Kill Bill and every other vicious martial tutor ever imagined — so demanding that it often seems impossible to overcome.

For me it was. I couldn’t finish this game, hard as I tried. Miniscule missteps in even the most basic conflict are so punitive that I found myself playing through stairwells in moonlit bamboo forests repeatedly on my way to a boss fight I hadn’t even started to fail yet. Toppling a massive horseman, another of the first bosses you can run up against, took me hours. Bringing him down was theoretically simple: I just had to dodge him when he came near, swing my grappling hook when he rode off, cut on him, repeat. The manual dexterity and patience to actually do it, though, was another matter entirely. My wife actually came into my office and frantically asked, “Are you okay?” while I tried for the 18th time to kill this guy. I was, apparently, making noises I was unaware of. I was just as miserable as I had been awed when I met that snake, or thrilled as I explored the Ashina clan’s vast estate and the surrounding countryside.

Would my love for Sekiro have deepened if it allowed me to make it easier by softening its combat or giving me endless resources to survive? Probably. I’ve always wanted to be a tourist in From Software’s worlds rather than a permanent resident. I prefer my leisure masochism to be based around exploration and discovery, not challenges of timing and pattern recognition. But I also can’t indict the game for being something it isn’t. I may loathe playing Sekiro: Shadows Die Twice, but I also have to acknowledge that it’s wholly committed to its artistic vision and executes it with astonishing care. I may hate that I’m physically incapable of finishing it, but my god do I respect it.