A brief confession: I’m not really much of a gamer. Sure, I play my share of videogames, but I’m not a gamer in the holistic sense of the word. I’ve never built a Magic: The Gathering deck, I’ve never roleplayed a character in Dungeons & Dragons and I’ve certainly never pored over a Warhammer figurine with a magnifying glass and a paintbrush. My lack of tabletop experience would go unnoticed anywhere else, but here at The Escapist, it’s downright weird. Antisocial, even. Like admitting you went to prom stag.

Our illustrious publisher, Alex Macris, however, stands at the opposite end of the spectrum. He’s got closets full of wargames recognizable only to tabletop connoisseurs: Fortress America, Attack!, Napoleon in Europe, and so forth. Not only that, he often modifies the rules to tweak the balance, pacing and overall player experience. When he plays Axis & Allies, he’s not content to limit himself to one theater; instead, he cobbles together multiple versions of the game into a full-scale global conflict. Yeah, it takes a pretty big table.

So when I played my first wargame at Alex’s place, I was something of a neophyte. What the hell are these “victory conditions” that everyone keeps talking about? I came from the Risk (vanilla, not 2210 A.D.) school of thinking where nothing short of total domination was acceptable. And resource management? This isn’t an RTS. Do I really have to worry about my oil production in the Gulf of Mexico just to reinforce my supply lines in Quebec? Aren’t children our most precious resource, anyway?

And then it hit me: I had played this kind of game before. It was my junior year of high school, it was Civilization II and for a few months, it was all all-consuming.

It isn’t played on an actual tabletop, but for all intents and purposes, Civilization is a tabletop game liberated from the burdens of physical existence. Sure, you could print it onto sheets of cardboard chips, decks of cards, and thousands of tiny plastic figurines – not to mention a textbook-sized volume of rules – and, indeed, a board game version, produced by Eagle Games, does exist, albeit in a simplified form. But why make unnecessary demands of the players when a computer can take care of all the dirty work?

Of course, there’s a byproduct to liberating players from having to referee themselves. What I’m about to say is probably gamer heresy, but I’ll say it anyway: Maybe, just maybe, there are too many rules. I’ll pause for a second while you build an effigy of me and set it on fire. Got it out of your system? Good.

I’m just as much a fan of complex, reflective, rule-intensive games as the next guy (and by “next guy” I mean “NASCAR fan”), but the Civilization series may have gone a bit overboard. Rules are made to create situations where players have to make meaningful decisions. This is definitely true in Civilization IV; for an aggressive pacifist like myself, beating the piss out of someone with culture is as satisfying as videogames get. It’s like settling a bar fight by comparing music collections.

But when my Panzer gets taken out by a Bronze Age Phalanx, or Berlin is ravaged by a 40-year famine from an errant mouse click, I’m always left scratching my head. There’s no doubt a perfectly logical reason for everything in Civilization, but if I have to read about it on a fan site just to figure it out, is it really improving the experience? 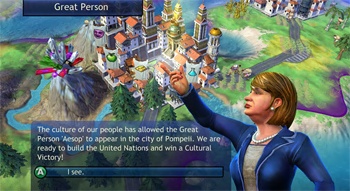 Civilization Revolution is the latest installment of the series, set for release on June 13 in Europe and July 8 in North America. The first indication that this Civ will be a drastic departure from Civs past is immediately evident: Civilization Revolution will be playable on the Xbox 360, PlayStation 3, hell, even the Nintendo DS. That’s right; after two and a half decades in the industry he helped pioneer, Sid Meier has revealed himself for what he really is: a consoletard.

But instead of dismissing the game outright and returning to my EVE spreadsheets, I decided to take it for a test drive by spending some time with the Xbox 360 demo, which became available early this morning. From the first moments of the opening cinematic, it’s clear that this Civ has reached a new level of graphical polish for the series. In Civilization IV, combat animations felt awkward and tacked on. Granted, it’s always a little jarring to watch a knight take out a Howitzer, so the bar for realism is set pretty low. In Revolution, however, battles play out (almost) in real time. When your Centurions attack a barbarian village, the bristling savages actually scurry around, taking potshots at your troops with their blowguns. It doesn’t add any strategic complexity to conflicts, but it sure is fun to watch.

In fact, making Revolution “fun to watch” seems to have been a primary goal for Firaxis. The series has always had an unabashedly corny sense of humor – meet Julius Caesar in Civilization IV and he’ll offer you some salad – but in Revolution it’s brought to the fore. Selecting a unit brings up their its animated 3-D representation in the lower right corner of the screen; warriors puff out their chests with bravado, while settlers shuffle around anxiously. Like EA DICE with Battlefield Heroes, Firaxis seems to have taken a page from Team Fortress‘ iconic character design.

Furthermore, Civs (the leaders of rival civilizations, not the games) now how have voices, speaking a heavily affected form of gibberish that’s both grating and strangely endearing. In the tutorial I played, you’re guided by a blustering, tweed-jacketed academic-type who obliviously interrupts your conversations with other units. It may not have made the game easier to learn, but it brought a smile to my face, anyway.

And then there’s the actual gameplay. The demo cuts you off at 1250 A.D., but from what I experienced, most of the markers of a Civilization game are still there. Your success depends on a balance of military might, cultural sophistication and economic efficiency; but the simple enjoyment of watching your empire grow from a few scattered hovels into a complex network of metropolises hasn’t changed a bit.

As for the control scheme, it’s surprisingly intuitive. After a few minutes, switching between units and managing your cities’ production becomes second nature. While it’s more than possible to play Revolution with a standard game pad, however, there’s certainly no advantage to be gained from doing so. You might be able to rig up a DDR dance pad and a couple of Samba de Amigo‘s maracas to play Steel Battalion if you had the time and the inclination, but it’s probably not how it was meant to be played.

Ultimately, diehard fans of the series (who exchange home-brew mods or vigorously debate strategies on fan-supported forums) might feel a bit betrayed by Revolution. It feels like some of the energy previously devoted to eking out every last ounce of complexity from the gameplay has been redirected into making it a more accessible, aesthetically pleasing experience. But if the thrill of conquest and the pride of empire-building are still to be had, who says consoletards shouldn’t be able to get in on the action?

Jordan Deam is Content Editor at The Escapist. His only gaming systems are an Xbox 360 and a Mac. Yeah, total consoletard.