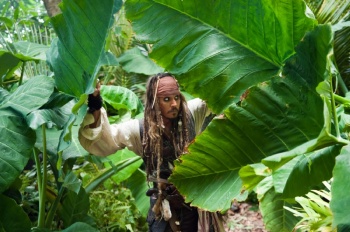 The Iron Man star has dropped out of the Oz prequel, and Disney is looking to Captain Jack Sparrow to fill the void.

Robert Downey Jr. was in place to star in Disney’s Oz, The Great and Powerful, a prequel of sorts to the 1939 classic The Wizard of Oz. The film tells the wizard’s backstory, following the magician from his traveling circus career to his hot air balloon escape to the land of the Oz. Downey has recently backed out of the project, leaving The Great and Powerful without its Wizard of Oz. Disney is now eying their stalwart Johnny Depp to step into the role.

Even if he doesn’t agree to appear in Oz, Depp will be a busy boy in 2011, as he has Dark Shadows coming up with frequent collaborator Tim Burton and The Lone Ranger for Pirates of the Caribbean director Gore Verbinski. Shadows begins shooting this spring, and Ranger, another Disney project, is not quite as far along. The Hollywood Reporter notes that “Disney clearly would love for Depp to do both, but if he commits to Oz, that pushes Ranger back,” not to mention the rumored Pirates 5 and 6.

Disney and Depp are creating quite a relationship: He stars as Captain Jack Sparrow in the studio’s wildly successful Pirates of the Caribbean films, and helped make Alice in Wonderland as one of the studio’s unprecedented three films to gross over one billion dollars last year. Oz, the Great and Powerful will be directed by Sam Raimi (The Evil Dead, Spider-Man, Drag Me to Hell), but, with this casting setback, has neither a production start date nor a release date.