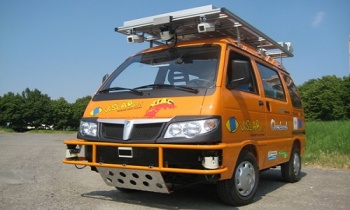 There is now a final solution to the bad drivers of the world as four electric vans drove all the way from Italy to China by themselves.

The 13,000 kilometer (8,000 miles) journey was accomplished without maps and the vans chose their route, which often left the beaten path for more treacherous roads through Siberia and China. Four solar-powered laser scanners and seven video cameras guided the computers controlling the steering and engine throttle. The vans were completely electric powered and they required 8 hours of charging every two to three hours of driving. The trip took nearly five months, possibly because the vehicles never went about 60 kph (37 mph). The convoy of four orange vans arrived in Shanghai this week for the Shanghai Expo.

Even though the vans drove themselves, there were a few human passengers on board in case anything went wrong. They did have to intervene a few times on the trip, like when the vans got caught in a traffic jam in Moscow. Apparently, our robot overlords do not yet understand the concept of “rush hour.”

“We didn’t know the route, I mean what the roads would have been and if we would have found nice roads, traffic, lots of traffic, medium traffic, crazy drivers or regular drivers, so we encountered the lot,” said Isabella Fredriga, one of the researchers who made the journey with the vans.

“This steering wheel is controlled by the PC. So the PC sends a command and the steering wheel moves and turns and we can follow the road, follow the curves and avoid obstacles with this,” said Alberto Broggi, head of the project.

“The idea here was to travel on a long route, on two different continents, in different states, different weather, different traffic conditions, different infrastructure. Then we can have some huge number of situations to test the system on,” he said.

Mirroring the trip that Marco Polo took in the 13th century, the journey of the four electric vans was part of a study commissioned by the European Research Council. The data collected will be used to help develop technology to assist drivers on the road.

Insert joke here about stereotypical women/Asian drivers and how we can all benefit from this technology.

Videogames Need to Learn When to Shut Up