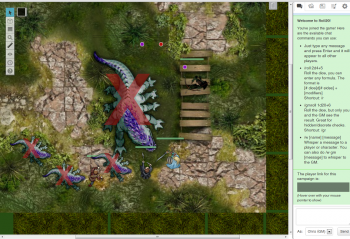 Browser-based virtual tabletop application Roll20 is closing in on 500,000 registered users. By the end of May, a big update titled Data Delve will launch several new features.

Roll20 recently reached a milestone: the two year anniversary of the end of its Kickstarter campaign and beginning of closed beta. Since then, the virtual tabletop has garnered almost 500,000 users – a milestone the developers believe will be attained by the end of May, alongside the release of a major content update called Data Delve. As of May 12, the virtual tabletop had 486,000 accounts, Roll20 co-founder Nolan T. Jones told The Escapist, and was averaging 800 new users a day.

When the Roll20 team initially launched its Kickstarter, it wasn’t sure an audience even existed for the app. “Two years ago when we took Roll20 to Kickstarter, we did it as an 18-day campaign because we weren’t certain there was anybody else out there that needed to play tabletop games long distance and if we were going to fail, we wanted to do it quickly,” said co-founder Riley Dutton. Now, with almost half a million users and all three co-creators working on the program full-time, Dutton can safely say “we weren’t alone.”

The upcoming Data Delve update, which goes live May 28, includes one massive feature that the Roll20 developers initially intended to keep out of their app: character sheets. “This update includes an overhaul to fully support character sheets for roleplaying games, which is funny to us as developers because we were adamant at our start that Roll20 was just going to be table components; tokens, maps, and dice,” said Jones. “But we’ve grown to a point where there are so many games that would really benefit from players being able to make rolls directly from their sheet, and decided it was time to increase the scope of what we’re doing.”

Further, Data Delve will be adding new measures to ensure that players don’t think Roll20’s random dice algorithms are fudging their rolls. “One of the weirdest and wildest features of the Data Delve update is the overkill we’ve put into dice rolling,” said Jones. “Computers can’t actually be random; but they can get so close it doesn’t matter. The thing is, people look for patterns – so after they get on a rough streak, they start to assume Roll20’s dice engine is broken, because they’re only seeing the rolls in their individual game. So we’ve done two things. First, we’re making a “leader board” of rolls that will give people an idea of the overall random action happening across the platform. And second, we’re now using a formula for randomness based on the fluctuations of a particle of light. It’s almost too much.”

Personally, I’ve been a virtual tabletop gamer for almost a decade, and have always been a strong proponent of MapTool as my virtual tabletop of choice. But with every Roll20 update making the app increasingly inviting, I’m finding fewer and fewer reasons to not make the crossover, apart from the burden of having to transfer entire campaigns over. Character sheets may just be my final holdout.

Oculus Rift Coming Soon to a Chuck E. Cheese’s Near You