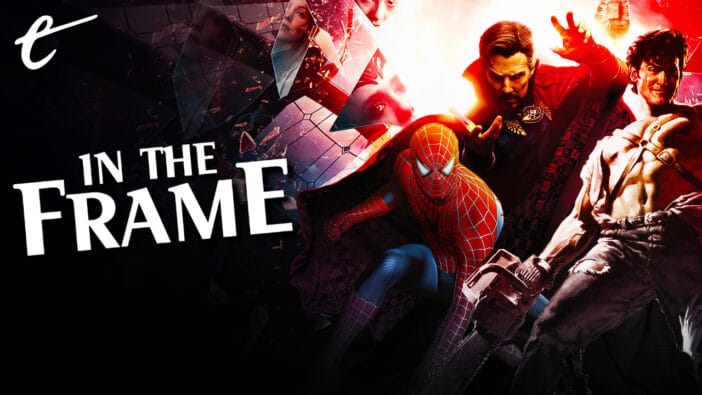 Rewatching Sam Raimi’s filmography in the lead-up to the release of Doctor Strange in the Multiverse of Madness is an interesting experience because Raimi is such a diverse filmmaker.

Raimi has worked in different genres, with different studios, in distinct styles, and at multiple budget levels. Raimi’s filmography stretches from something like the low-budget horror movie The Evil Dead to the Coen-inflected noir of A Simple Plan to superhero blockbusters like Spider-Man. Raimi’s a noteworthy filmmaker in large part because he can be very hard to pin down. It’s hard to reconcile the man who made Drag Me to Hell with the director of Oz the Great and Powerful.

Discussions of Raimi tend to focus on his technique. This makes sense, as Raimi’s trademark style is so unique that Tom Holland could boast about how director Jon Watts had tried to pay homage to the “Raimi Cam” in Spider-Man: No Way Home. Raimi’s default style leans into crash zooms and canted angles. Something like The Quick and the Dead is a visual sugar rush in a blockbuster age where Marvel tried to “horizontalize” director Kenneth Branagh’s canted angles in Thor.

However, these discussions of Raimi’s craft can often overshadow the director. It is notable that Raimi spent a lot of time after The Quick and the Dead trying to escape his reputation as a visual stylist, turning in much more conventional (although still impressive) work on a trio of mid-budget adult-skewing movies: A Simple Plan, For the Love of the Game, and The Gift. The extent to which these movies work varies significantly on a case-by-case basis, but they are still Raimi’s films.

If there is an intriguing recurring theme that ties Raimi’s filmography together, it is perhaps the idea of trauma and how trauma can fundamentally change the course of a person’s life. Of course, recent years have seen “trauma” become something of a buzzword for movies hoping to approximate some level of emotional depth, leading to supercuts of Jamie Lee Curtis explaining how the latest Halloween sequel is — no points for guessing — “about trauma.” It can be reductive. 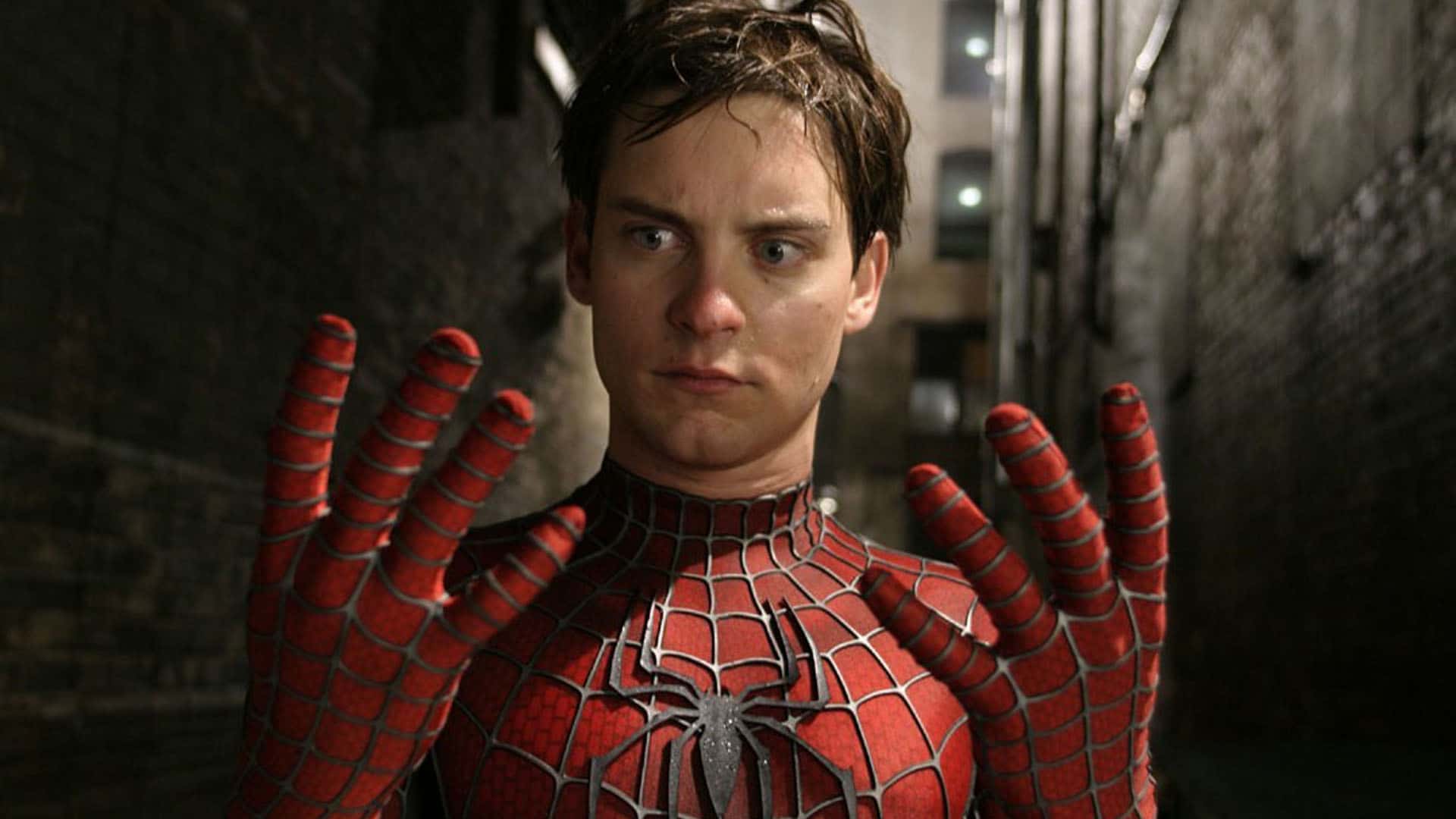 However, much like Francis Ford Coppola complaining about superhero movies at Cannes in May 1979, Sam Raimi was at least ahead of the cultural curve. Watching Raimi’s filmography from beginning to end, it is clear that the director is fascinated by the idea of a trauma so fundamental and so profound that it radically alters a person. That trauma can happen before a film starts, in its opening act, or even at its conclusion, but it is a recurring motif in Raimi’s work.

Raimi’s Evil Dead trilogy offers the most extreme form of this break from reality. At the start of The Evil Dead, Ash Williams (Bruce Campbell) is just a normal teenager who takes a trip to a remote cabin with his girlfriend Linda (Betsy Baker). Once there, the teenagers play a tape recording that accidentally unleashes the eponymous evil spirits. Ash’s friends are killed relatively quickly, and much of the second half of the film is given over to the emotional torment of Ash.

Ash is a sweet young boy. However, the malevolent forces in that remote cabin seem intent on driving him insane. Even at the end of the movie, as he stumbles out into the dawn, he cannot escape them. Evil Dead 2: Dead by Dawn leans into this. Inverting the structure of the first movie, the first half of Evil Dead 2 largely consists of the monsters tormenting Ash. Ash isn’t just physically tortured. He is being driven insane. He is forced to dismember his own girlfriend.

At one point, trying to reassure himself, Ash tells his reflection, “I’m fine. I’m fine.” This prompts his reflection to reach through the mirror and challenge him, “I don’t think so. We just cut up our girlfriend with a chainsaw. Does that sound ‘fine’?” At another point, the whole cabin seems to come alive to laugh at Ash. He laughs along with them. To be clear, there is no ambiguity in the Evil Dead; the demonic forces haunting Ash exist. It is just that he is also losing his mind. 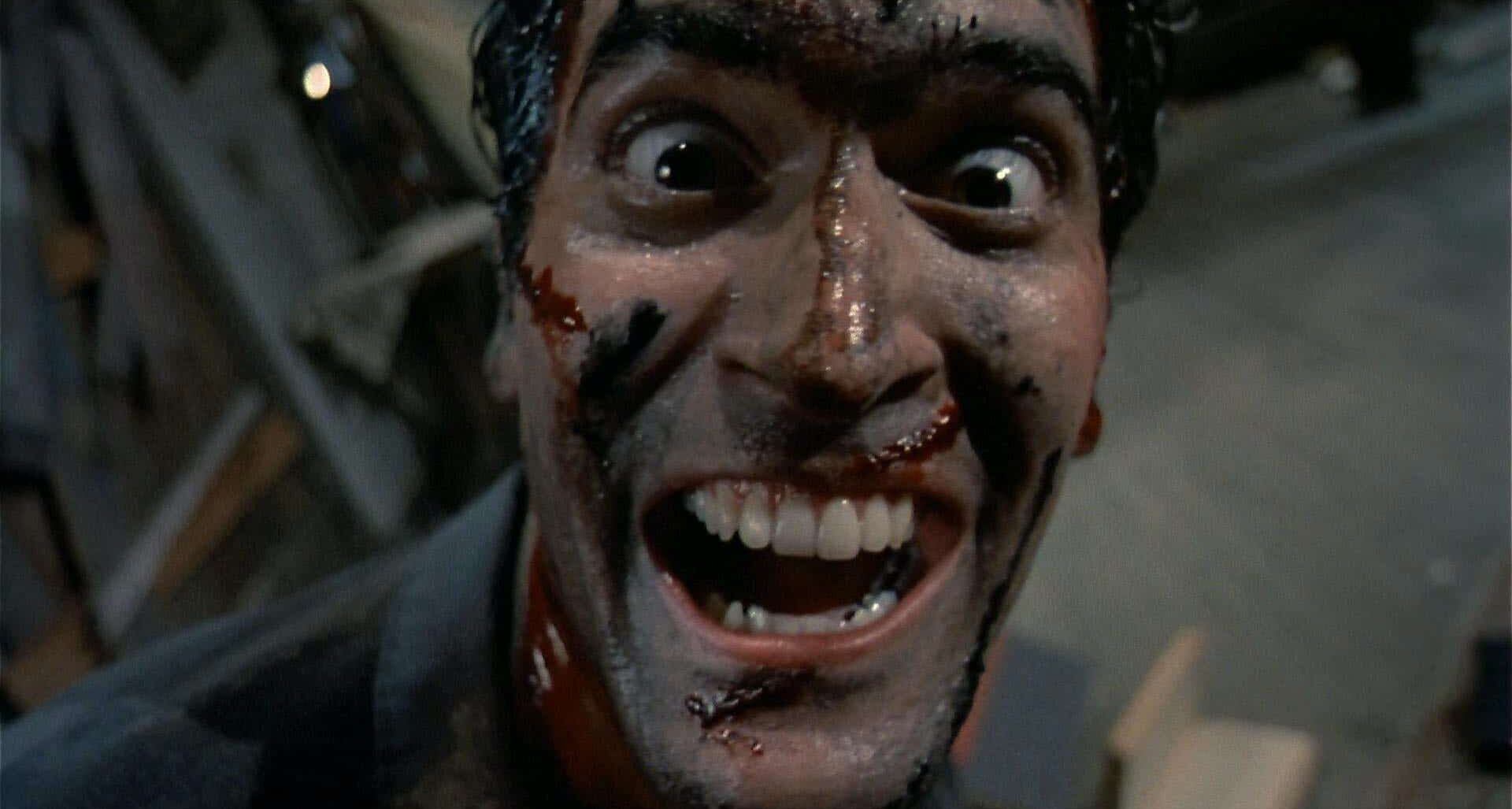 This transformation is complete by the third film in the franchise, Army of Darkness. Ash has been so altered by the experiences in the previous two films that he is barely recognizable as the sweet young boy who bought a naff necklace for his sweetheart. In Army of Darkness, Ash has become something akin to a cheesy action hero, a parody of a human being who spouts terrible one-liners and cares about very little beyond his own immediate gratification. He is kind of an asshole now.

Sam Raimi offers a slightly more dramatic twist on this concept in Darkman, in which scientist Peyton Westlake (Liam Neeson) finds himself physically and mentally transformed following an attempted murder. Physically disfigured and unable to feel pain, Peyton loses touch with his humanity. He struggles to maintain an emotional connection to his girlfriend Julie (Frances McDormand), snapping under the slightest pressure and ruining an otherwise lovely afternoon.

Peyton initially believes that he can reclaim his humanity by making a new face for himself. However, he eventually realizes he is no longer the timid scientist with the lawyer girlfriend. “As I worked on the mask, I found the man inside was changing,” he tells Julie at the end of the movie. “He became wrong, a monster. I can live with it now, but nobody else can.” Peyton leaves Julie, disappearing into the crowd as a new man, one played by Bruce Campbell.

The Quick and the Dead is a love letter to spaghetti westerns, so its central character arc is an homage to the backstory of the anonymous cowboy (Charles Bronson) in Once Upon a Time in the West. In The Quick and the Dead, a gunslinger known as “the Lady” (Sharon Stone) comes to the town of Redemption. She volunteers to partake in a local tournament, organized by the sadistic local leader John Herod (Gene Hackman). 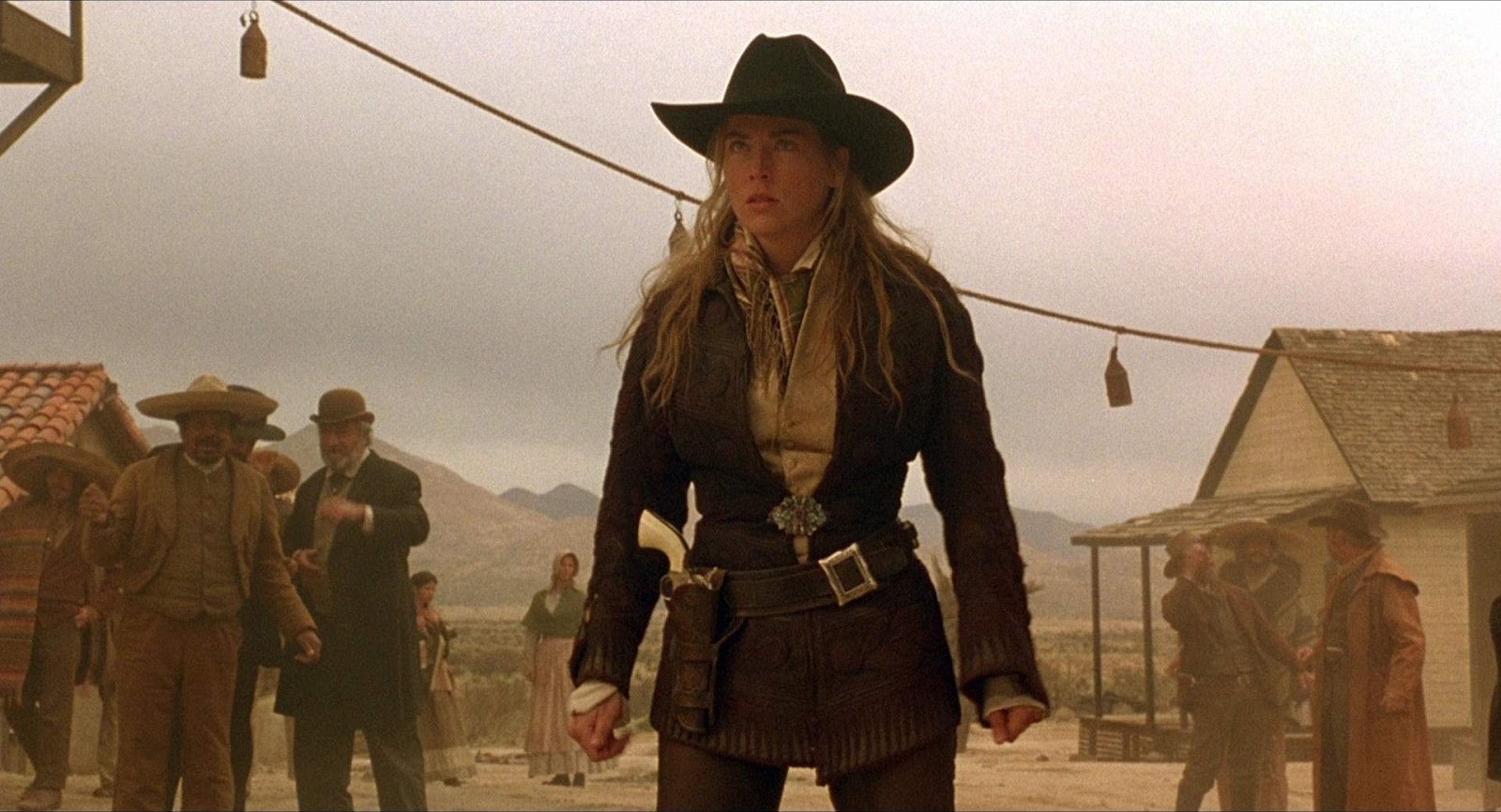 Herod spends a significant stretch of the movie trying to figure out who this mysterious stranger is. At the climax, facing him down, she reveals what drove her to this point. “You stole my life,” she explains. Decades earlier, Herod had hanged her father. Promising to let her father go if she could shoot the rope, Herod gave the young girl a gun. She shot and killed her father instead. “The Lady” has spent her entire life living in that moment.

If that moment of formative trauma is the point of origin for The Quick and the Dead, it is the endpoint for A Simple Plan. One of the more underrated neo-noir films of the 1990s, A Simple Plan is narrated by Hank Mitchell (Bill Paxton) in the past tense. In his opening narration, he speaks about the innocence and the simple pleasures of his previous existence. “For a while there, without hardly even realizing it, I had it all,” he tells the audience. “I was a happy man.”

A Simple Plan tells the story of the shattering of that happiness. Hank, along with his brother Jacob (Billy Bob Thornton) and their friend Lou (Brent Briscoe), discovers a crashed plane holding more than $4 million. The three men conspire to keep the money. Inevitably, greed and desperation gets the better of them. Hank is forced to kill Lou and then Jacob to protect their secret, and eventually he discovers that the money has been marked by the authorities and so cannot be spent.

A Simple Plan invites comparisons to Fargo, which makes sense given Raimi’s close association with the Coen Brothers. However, for all its cynicism, Fargo finds a warm humanism in the marriage of Marge (Frances McDormand) and Norm Gunderson (John Carroll Lynch). The movie ends with the two together in bed, Marge assuring Norm of the value of his seemingly unimportant three cent stamp. A Simple Plan is a much bleaker movie. Hank has lost everything and seems unlikely to recover. 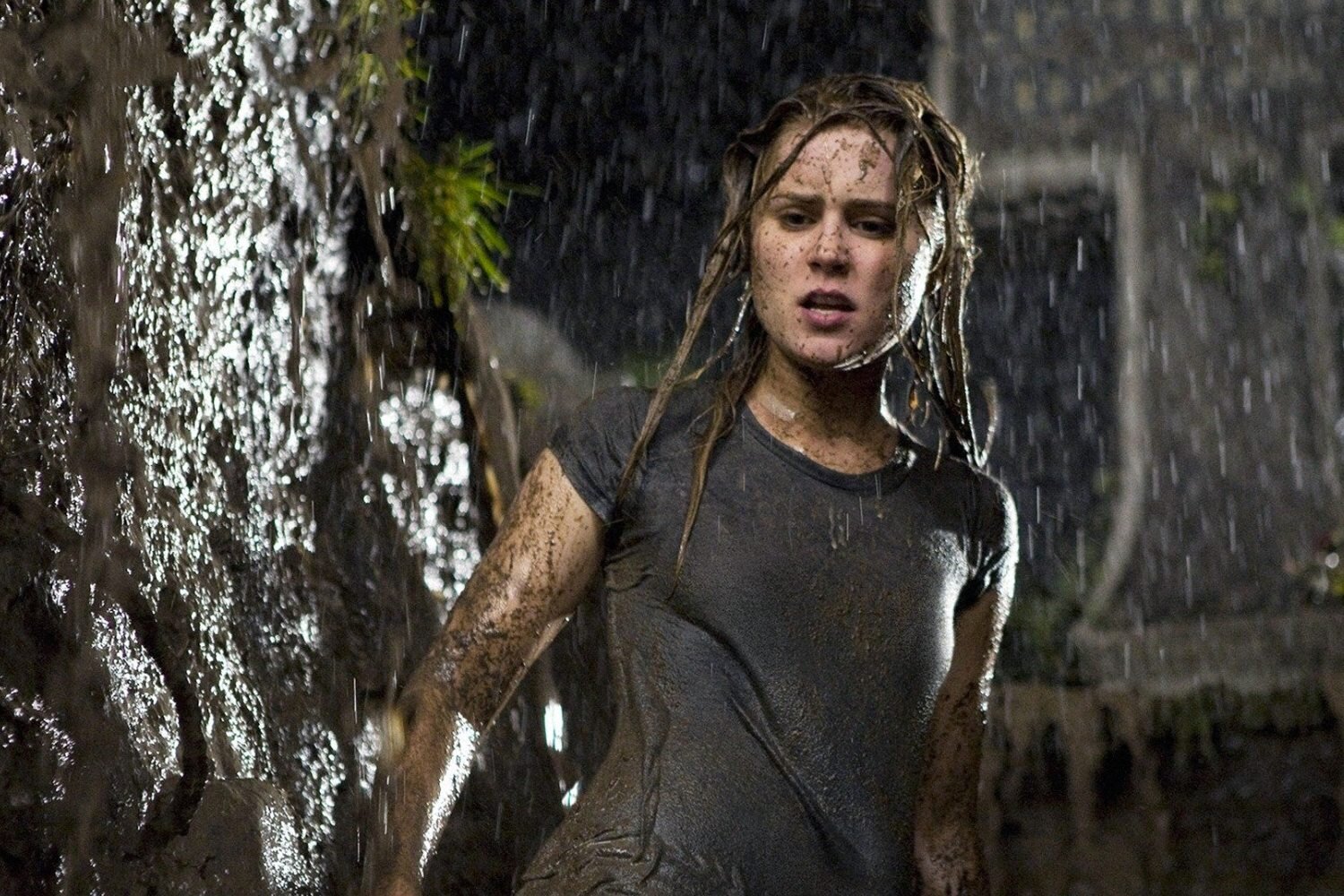 In Raimi’s world, trauma can make monsters. In Drag Me to Hell, loan officer Christine Brown (Alison Lohman) finds herself targeted by a gypsy curse. She will literally be dragged to hell and tormented for all eternity. However, Christine finds herself shocked at what she will do to try to escape the curse, even sacrificing the kitten that she adopted in a desperate effort to escape her fate. She even considers passing the curse on to co-worker Stu Rubin (Reggie Lee) to get off the hook.

In Oz the Great and Powerful, the witch Theodora (Mila Kunis) finds herself literally and figuratively transformed into a monster after the philandering stage magician Oscar Diggs (James Franco) breaks her heart. Like Peyton Westlake, and to a lesser extent Ash Williams, her transformation is physical as well as emotional. Eating from a magic apple, her skin turns green and her features warp. Diggs promises her that she can come back if she ever heals her wickedness, but she yells, “Never!”

To be fair, Sam Raimi suggests that these sorts of traumas don’t have to break people. In For Love of the Game, pitcher Billy Chapel (Kevin Costner) deals with the fact that an injury to his hand might end his career. Like Peyton Westlake, he is initially convinced that he can recover and can come back. In the end though, it is too much for him. Billy accepts the injury but understands that he had a good career. He takes the chance to start a new life with his other love, Jane Aubrey (Kelly Preston).

Of course, the ultimate example in Raimi’s filmography is his work on the Spider-Man trilogy. These films are about how Peter Parker (Tobey Maguire) refuses to let the tragedies and traumas in his life transform him into a monster. Indeed, that is what separates Peter from his foes like Norman Osborn (Willem Dafoe) or Otto Octavius (Alfred Molina). Peter takes a life-altering loss and channels it into something better and heroic. It is a nice centerpiece of Raimi’s filmography.

It remains to be seen whether this theme will carry across to Doctor Strange in the Multiverse of Madness, but it seems likely given that the movie will focus on both Wanda Maximoff (Elizabeth Olsen), whose trauma was explored in WandaVision, and an alternate version of Doctor Strange (Benedict Cumberbatch) who destroyed the universe in response to the loss of his love. With that in mind, it has the makings of a quintessential Sam Raimi film.