Canadian scientists have found the shipwrecked vessel that first discovered the Northwest Passage. The vessel was the HMS Investigator, a British ship that was sent in 1845 to find two lost ships that had been a part of Sir John Franklin’s Royal Navy expedition to discover the passage that linked the Atlantic to the Pacific.

The sunken ship was found at Mercy Bay near the Northwest Territories by Marc-Andre Bernier of Parks Canada, who used sonar images to locate the vessel. Bernier compares the discovery to finding one of Columbus’ ships.

“It’s in surprisingly good condition,” said Bernier. “The reason we were so lucky in a way was because the ship had not moved too much from the place it was abandoned.”

The ship was well-preserved due to the icy waters in the bay, where it sank in 1854. The HMS Investigator was deployed in 1850, but was abandoned after being spending two winters in the Arctic ice. The crew left behind equipment and provisions on the ship and at the shore, an “incredibly rich treasure trove” for archaeologists, according to Jim Prentice. The graves of three Royal Navy sailors were also found at the site.

“This really knits together the history of that really early exploration – this history of the Inuit people … who have been here thousands of years, and our modern attempts here in Canada,” said Prentice. 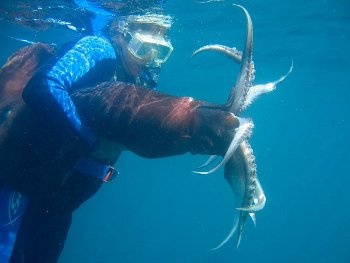 For the first time ever, scientists have recorded footage of Humboldt squids (aka jumbo squids) “lighting up like Christmas trees,” as they flash and flare using their built-in lights. Though scientists have seen this behavior before while diving, it’s exciting to see natural squid behavior without the interference of humans.

Squids can flash and flare their skin using chromatophores – light reflecting cells. By changing the intensity and rate of the flashing, it’s believed that squids can communicate with one another. When a squid opens its arms wide and flashes from red to white, it could be trying to intimidate rivals or attracting a potential mate.

To catch the squids, scientists donned wetsuits and dove into the water with the beasts after luring them to the surface with chum. Jumping into the water with a seven foot Humboldt squid is no easy feat. These cephalopods are down-right nasty – aggressive and territorial; each sucker surrounds a ring of barbed teeth.

Once in the water, herpetologist Brady Barr and colleagues secured a CritterCam on a synthetic sleeve around the squid’s mantle. The first sleeve was a disaster – flashing red LED lights on the camera attracted the attention of aggressive Humboldts, which ripped it off of the other squid. The next CritterCam deployments fared better, and the team received footage of flashy displays between the squids.

On this same expedition, the team measured the strength of a Humboldt squid’s bite. Squids have a strong chitinous beak nestled in between their circle of arms and tentacles. Let’s put it this way: You don’t want to get in between a squid and its meal. While they were attaching CritterCams to Humboldts, the team also measured the strength of the squid’s bite. According to the team, the squid bit through two plates of Kevlar – which is about 20 times stronger than steel. “I am pretty sure a large squid could bite well into a human arm,-” explains Roger Hanlon, a senior scientist at the Marine Biological Laboratory in Woods Hole, “and perhaps even through the bone.” As a reference, the bite readings show that the squid had a bite force of more 1000 pounds – stronger than a hyena, but less than a crocodile’s bite. 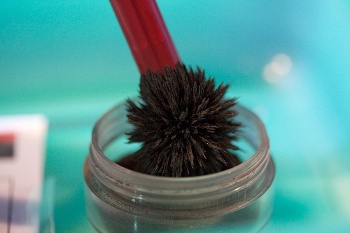 Graphene, despite being useful in its other, non-superhero form, graphite, can form super-strong pseudo-magnetic fields stronger than any ever seen. If you stretch a piece of graphene, the stress causes electrons to behave as if they were standing too close to a really big magnetic field. In scientific terms, this means that the bonds between atoms change, and electrons begin to move differently between them, creating nanobubbles. In laymen’s terms, it just means: Whoa, cool!

Scientists have been looking at big magnetic fields for 100 years, but they have never been able to create one that lasted very long. The strongest magnetic field is 85 Tesla, and it only lasted a few thousandths of a second. When they tried to create anything stronger than that, the magnets would blow apart. Records indicate that the electrons inside a pseudo-electromagnetic field of graphene endure 300 Tesla. To put this in perspective, a normal MRI has a magnetic field of 1.5 or 3 Tesla. The Earth’s own magnetic field registers around 0.00005 Tesla, and a small magnet is about 0.01 Tesla.

Michael Crommie, an author of the study, states that this property of graphene could have potential use in all types of electronic devices. “Controlling where electrons live and how they move is an essential feature of all electronic devices,” says Crommie. “New types of control allow us to create new devices, and so our demonstration of strain engineering in graphene provides an entirely new way for mechanically controlling electronic structure in graphene. The effect is so strong that we could do it at room temperature.”

Imagine you’re motor-boating down the Okefenokee Swamp in Georgia. As you idle across the water, you notice a few alligators popping their heads out of the water around you, watching with a sense of indifference. As you approach a particularly narrow stretch, you notice even more alligators surfacing. There must be at least 100, most of them still, all within spitting distance of the boat. What would you do?

If you’re a regular Joe, you probably wet yourself, try to remember if the trick from Jurassic Park (stand very still) works on alligators, and then turn that boat straight around. I know I would. If you’re Ray Cason, you get out your video camera, start rolling and “ease” your way through the reptilian gauntlet.

Though it was hailed as a “feeding frenzy,” with every social media and news site from YouTube to CNN providing some form of coverage of the video. In reality, Cason stumbled upon a rare “cooperative feeding” event. A feeding frenzy occurs when the reptiles are feeding in close quarters and engage in a free-for-all, fighting each other for access to food and blocking the smaller gators from eating. A cooperative feed, however, occurs when alligators, according to a University of Florida website, “face into the current and arrange themselves side-by-side in a row across the flow of water”-the better to catch a flood of fish squeezed into a bottleneck in a free-flowing channel.”

Despite the fact that there was some wrestling and splashing among the alligators, Cason decided to maneuver his boat through the group in order to go fishing, and he’s received some flak for it. American alligators are a protected species and there’s some concern that the boat could have harmed some of them. Herpetologist Kenneth Krysko put it this way: “No one would be allowed to do that if they were manatees, and manatees are protected as well.” Blair Hayman, a biologist at Florida’s Alligator Management Program, disagrees. “It doesn’t appear that he is doing anything,” she said. “He’s just boating at normal speed. Typically [alligator] harassment would be if he were poking [an alligator] with a stick or intentionally touching or otherwise disturbing him.”