Deep at the bottom of the ocean, something stirs, creating a brief and twisting sandstorm. A basking shark circles its territory, its heightened senses honing in on a potential meal. As it swims closer, the sand settles and the shark’s meal seems to have escaped. The shark swims away, passing a lone coconut shell as it continues its hunt. When the threat has passed, a single tip of a tentacle appears from underneath the shell, tipping it upwards just enough for the octopus to peer out of its makeshift hideout.

Tool usage, and I use that term broadly, is one of the “hallmarks of mankind.” It used to be the case that there was only evidence of humans taking sticks and stones and using them for an innovative purpose. And then there came bonobos, who use sticks to fish ants out of anthills. And then there were dolphins, who stick a sponge on their snout to protect themselves while they search for stingrays. And now there are octopuses, which find abandoned, halved coconut shells and don them like armor.

Researchers working off the coasts of Bali and Northern Sulawesi spotted at least four occasions of this particular usage of coconuts in veined octopuses. Having exhausted their authentic Coconut Rum drink, humans partying off the coasts of Bali and other exotic locales toss their coconuts into the ocean, where they eventually come to rest on the ocean floor. Enterprising young octopuses dig these unexpected treasures up by latching onto them with all eight arms and rotating them out of the muck and mud. Those octopuses who only find one coconut half use it as a makeshift hideout when predators come about. Those lucky enough to find two halves often recreate the original coconut form and sneak inside.

The best part is how they procure the coconuts. After prying them from the mud, they sink into the pit of the hollowed out coconut and then extend their arms from each side. Gripping the coconut with their suckers, they stiffen their arms and literally run, however sloppily, towards their destination. It’s really, really cute. Here – check out the video (feel free to ignore the music).

Thanks for the heads up, crotalidian.

(And before a debate even starts, no, the plural of octopus is not octopi. Octopi applies a Latinized pluralization to a Greek word, which is a no-no. And, no, I didn’t actually know that until a much-smarter than me etymologist told me so.) 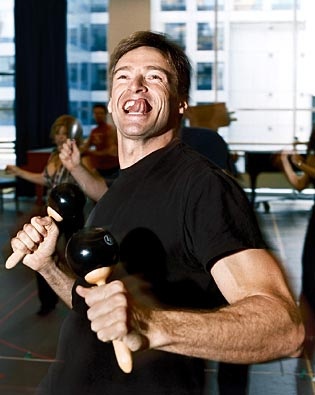 Thanks Science, but We Already Knew Dad-Dancing is a Turn Off

Have we all been privy to the horror that is “dad dancing?” You know, the type of dance that vaguely resembles a ragdoll being jerked around by invisible strings, with the occasional “cool” dance move they saw on “America’s Best Dance Crew”? Apparently, this is their way of saying “I’m infertile, move along.”

According to the appropriately named Dr. Peter Dad, a psychologist at the University of Herfordshire, “the message their dancing sends out is ‘stay away, I’m not fertile.’ It would seem completely unsurprising to me that since middle-aged men have passed their natural reproductive age, and probably have a family already, evolution would act to ensure they are no longer attractive to 18-year old girls.” Thank you, evolution.

It’s not just the awkward dancing a la Elaine that turns chicks off. Apparently, females can gauge levels of testosterone exuding from their dance partners by the energy of the moves. “Dad dancing” just doesn’t cut it.

Interestingly enough, the ability of dads to dance gracefully performs an interesting combo itself. During the middle age years, they still dance awkwardly because, though they may be “infertile,” they’re still sexually active and thus naturally awkward around women. When they reach retirement age, however, Dr. Dad found that men enjoy dancing more than ever before and become ever more graceful when they cut a rug. This increase in dancing bravado may come in conjunction with a woman’s decline in her own dancing prowess. As women hit menopause, they lose confidence in their dancing abilities. “Men might well be physically intimidated by women throughout their lives, and then experience a release when women’s confidence drops through the floor,” claims Dr. Dad. 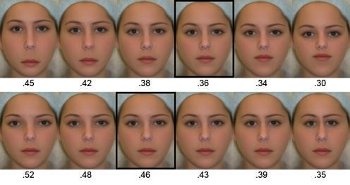 In related news, researchers at the University of California, San Diego and the University of Toronto have found the “golden ratio” of female facial beauty. Participants in the study were shown a series of faces, each with a different range of eye-mouth distance and distance between the eyes, and were asked to choose which face was more attractive. The researchers discovered two “golden ratios” from the results. Female faces are considered more attractive when the vertical distance between their eyes and mouth is 36 percent of their face’s length, and the horizontal distance between their eyes is 46 percent of the face’s width. Before you get out your rulers and calculators, let me just point out that the study was only on Caucasian faces and did not include male faces, faces of other races, or children faces. 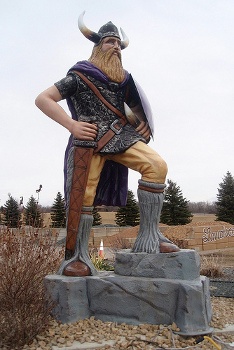 If recent findings from an excavation site in York, England are to be believed, Vikings not only engaged in raping and pillaging, but recycling, too. After a good day’s worth of fighting whatever got in their way, Viking warriors would bring their aging weapons to a central processing center and have it restyled.

Charles Jones, organizer of the Fulford Battlefield Society found hundreds of pieces of axes, sword parts, arrowheads, and melted-down lumps of iron. They also found “smithing hearth bottoms,” remains of melted metal that drip down during the reprocessing of old weapons. These items are currently being analyzed to determine if they do have Viking origins. Viking weapons are famous for the way they treated their iron; using alloys of soft iron and hard steel.

Jones believes the recycling site was created in 1066, after the defeat of English warriors at the Battle of Fulford. The recycling site was destroyed five days later, after a second attack by the English which resulted in the death of Viking leader, King Harald III. The English king, King Harold II lost his life in the Battle of Hastings later that month, by William, Duke of Normandy, who became the new king of England.

Seems reasonable that an expeditionary group would recycle it’s own tools, after all, it was common for useless metal to be re-melted into musket balls during the Revolutionary War. I’ll believe that Vikings recycled when they dig up an ancient CO2 chart…

Lauren Admire is going to Vegas for the holidays! Woo!