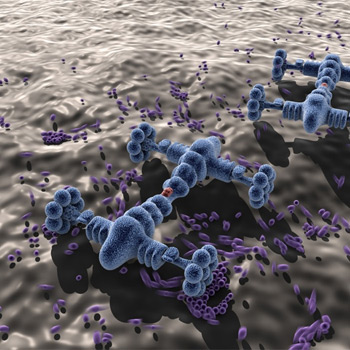 A group of Israeli researchers have successfully inserted nanobots into cockroach DNA.

Even though we’re still a long way from the kind of nanites that Wesley Crusher used on the USS Enterprise, nanotechnology is progressing quickly. This week, scientists at the Institute of Nanotechnology and Advanced Materials in Israel successfully inserted a microscopic robot into a cockroach’s DNA, creating a tiny cyborg that’s capable of surviving a nuclear blast.

A team of researchers led by Ido Bachelet used a technique called “DNA origami” to manipulate long strings of double-helix, folding it into a box and creating the nanobot. The biological device was then injected into a cockroach.

The robots were designed to respond to chemical cues within the cockroach’s body, acting like microscopic pieces of biological software. This is the first time that DNA has been successfully crafted to respond in this way.

The robots don’t do much right now, but the fact that this kind of technology even exists is incredible. Creating a piece of machinery from genetic code sounds like the stuff of science fiction.

I’m starting to feel bad for cockroaches, though. Last year, researchers from North Carolina State University implanted a small circuit into a cockroach’s abdomen, which allowed the insects to be controlled using a Kinect.