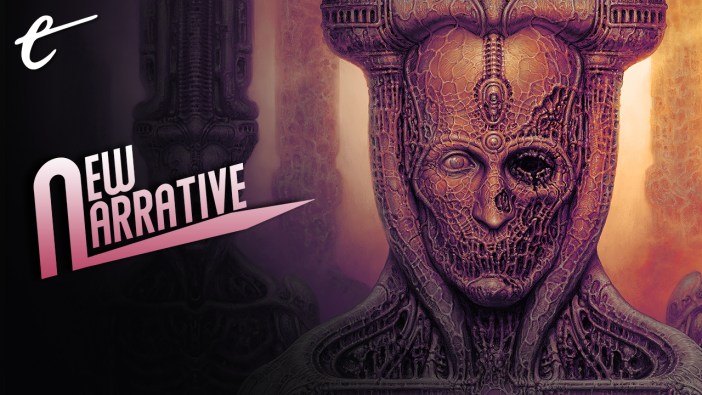 This article contains full spoilers for Scorn, including its ending.

Scorn is as repulsive as it is awe-inspiring. The clear influences from H. R. Giger and Zdzisław Beksiński make for some astounding architecture. Spine-like corridors stretch into misty horizons, rotting towers trail disturbingly humanoid appendages over yawning chasms, and dilapidated machinery hints at grand plans half-abandoned by unseen masters of whatever hellish world Scorn is set on.

The architecture invites increasingly repugnant interaction. First the violent grafting of a key to the protagonist’s arm, the controller vibrating and the screen shaking in response to pained attempts to disengage. Then the placement of hands inside a fleshy sleeve that acts as a door control. Later, the sliding of uncertain fingers into a glove-like lever. By the end of the game, the protagonist does not shy away from pulverizing vaguely fetal creatures to recharge a portable battery that wakes a pregnant humanoid — the circle of life reversed and turned into something unforgettably macabre.

It’s Cronenberg-like body horror that runs the full gamut from mildly menacing to borderline unwatchable, all the worse for the control Scorn places in your hands and the animations rendered with painstaking grotesquery. The choice to pair this aesthetic with frequent and increasingly difficult puzzles and slow, ammunition-starved gunplay makes for a singularly strange experience. It is as brilliant in the first half as it is frustrating in the second — a kind of gore-drenched Myst by way of Alien: Isolation.

And yet perhaps the frustrations of the second half are there by design. Scorn has no dialogue or written lore of any kind. Any narrative as minimalist as this leaves a lot of room for ambiguity and interpretation. Nonetheless, more than anything else, Scorn feels like a tale of a battle with oneself, rendered in blood and bloody sinew — a literal battle with one’s body playing metaphor for the struggle with one’s ambitions, limitations, and circumstances. 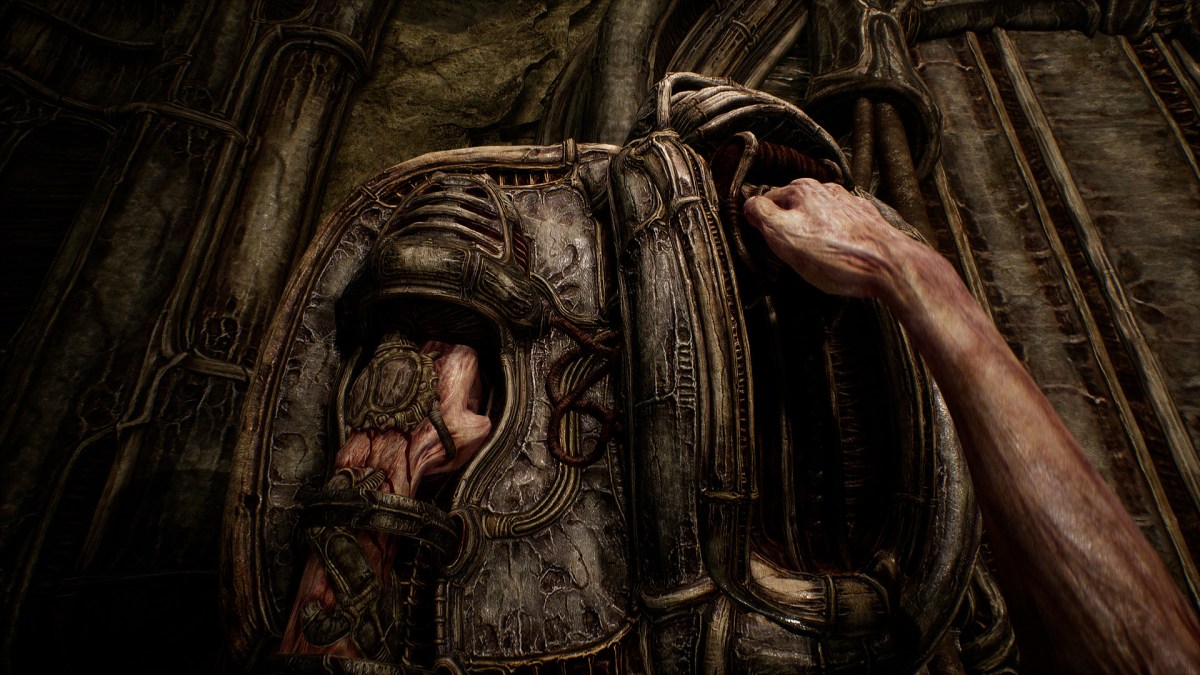 The protagonist, a creature that looks like papier-mâché flesh plastered over Giger’s rendition of a skeleton, wakes up to an unspecified quest. Initially it appears like the desire to escape, as the protagonist is clearly a slave in what seems like a planet-sized abattoir where bodies are digested, torn apart, and discarded with gruesome frequency to power unspeakable machinery.

One scene involves the protagonist’s emergence from one of hundreds of capsules that line a vast wall as far as the eye can see, and it is reminiscent enough of Neo’s birth in The Matrix to cement the idea that this is a factory. Later, as the protagonist makes his (an especially graphic late-game scene suggests the protagonist is male) way out of an enormous pit and along a train track, it seems he could be questing for something more. In the end, it may be nothing less than the quest for transcendence.

That quest is lined with obstacles beyond puzzles and combat sections. Early on, the protagonist is attacked by a centipede-like monster that proves to be a parasite. It clings fast to his back and punches eager hands through his malnourished body. Initially, the relationship may seem benign. The parasite grows stronger, but the host gains an additional pair of appendages, useful for a diegetic representation of the player’s inventory, if nothing else. As time goes by, however, the parasite periodically adjusts its grip and the host is literally torn apart with each adjustment. By the time he finds a device to remove the parasite, a contraption that wouldn’t be out of place in Prometheus’ cesarean section scene, his body is failing him entirely. 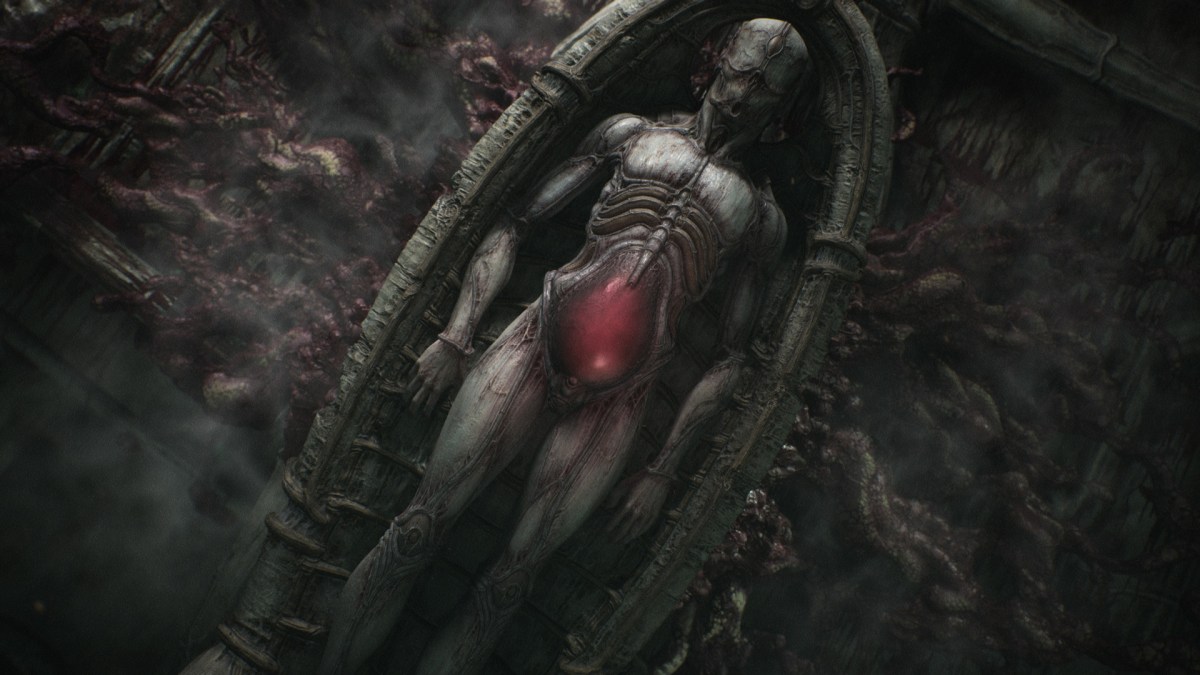 Besides missing chunks of his midriff, interaction with the parasite triggers a gradual growth all over the protagonist’s body. During the final stages of the symbiosis the growth consumes his hands, preventing him from switching between weapons or from interacting with machinery without temporarily cutting it away — a process that hurts the host more than the parasite. As a result, by the end, he is fit for little more than to be carried into Scorn’s final sanctum.

The sanctum hides a portal, its malformed edges bleeding into the world even as two rows of immobile creatures line the way towards it, partially dissolving as they seem to be gradually absorbed into it. Religious imagery suggests that this is a place of transcendence, rather than annihilation. Or perhaps annihilation is tantamount to transcendence in a world built for torture. In any case, the protagonist does not make it. The centipede parasite tracks him at the final hurdle and the two are locked in eternal immobility.

Besides the metaphor for the struggle with oneself, it is tempting to think of this as a commentary on mind-body dualism: the transcendence of the mind ultimately hampered by the failings of the body. But the interpretation seems unlikely. Even Scorn’s most out-of-body experience — the connection of the protagonist to some kind of hive mind — remains firmly threaded to the cerebrum. 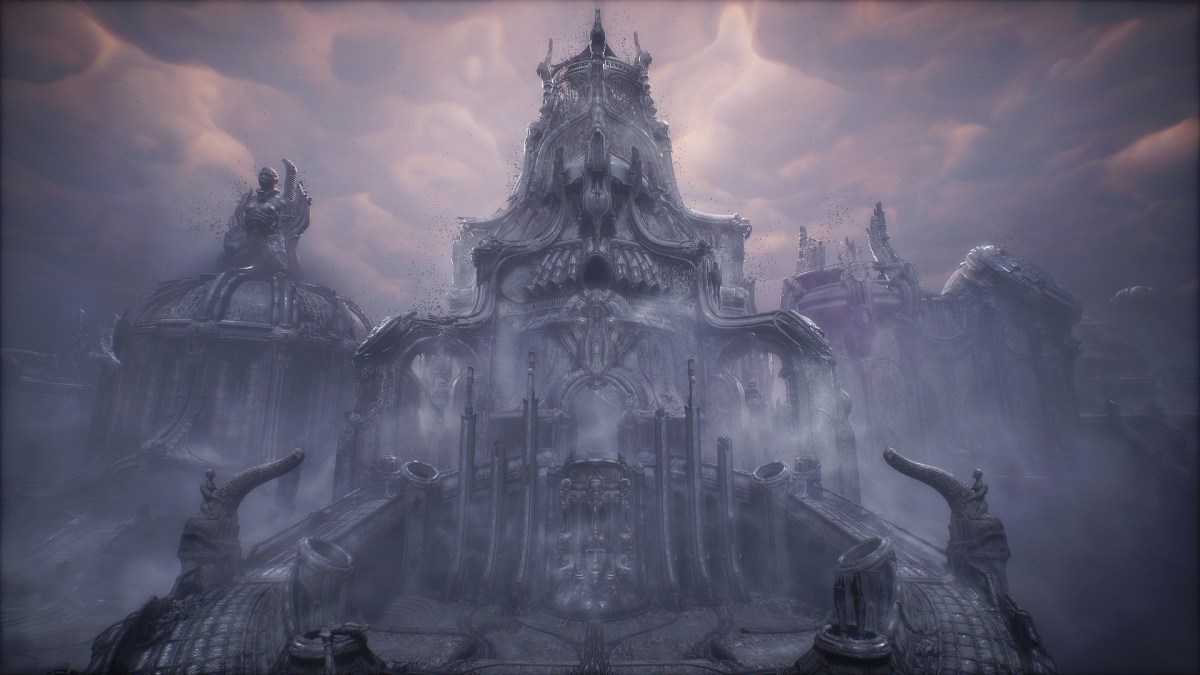 It may be a particularly grotesque instance of the adage that the journey matters more than the destination. When the journey is as brutally torturous as this, can such trite sentiment hold true, if it ever did at all? Conversely, can we value a narrative for what it gives us in the moment rather than for its final payoff? By withholding any real closure from the ending, Scorn puts attention back on the five-to-six hours that precede it.

Or perhaps it’s a commentary on player agency. The gradual degradation of the protagonist’s body mirrors a gradual removal of control from the player. Where BioShock famously asked the player to perform certain actions and then invited them to consider that they had no choice given the constraints of linear game design, Scorn invites the player to interrogate what performing an action means. What happens when the feeling of flow generated by the inductive expectation that a certain player input will generate a certain behavior in their avatar is broken?

It is, after all, worth considering what “scorn” might mean here. Contempt for the protagonist, to be sure, or for the lives of many like him. But also disdain for expectations, for comfort and familiarity, for the idea of a tidy game that neatly fits within a genre.