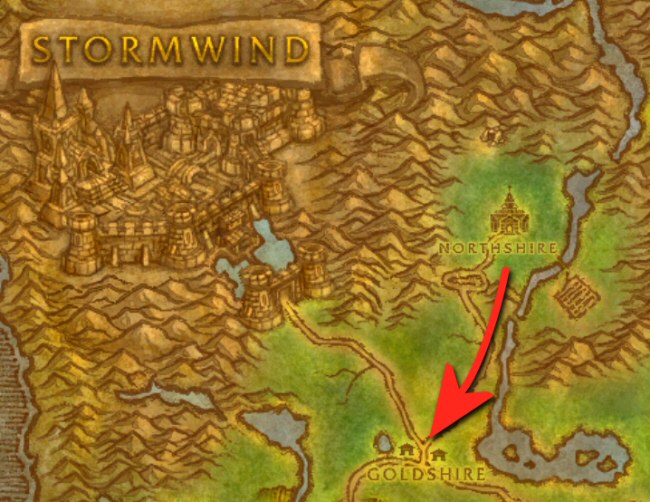 Norman “Dethbringerr” Warlock and Gobstab his faithful demonic companion have just finished Northshire, the newbie human area of World of Warcraft. (Pre-Cataclysm.) No matter which race you pick, the game will start you out in a little penned-in area for your first five levels. Then it cuts you loose in a larger area for levels 6-10. Outside of the newbie areas the game stops coddling you. Monsters will attack you. You’ll have lot of quests going at once. You’ll probably be doing some professions. Lots of running.

For Humans, once you’re done in the newbie area you’re sent on to Goldshire… 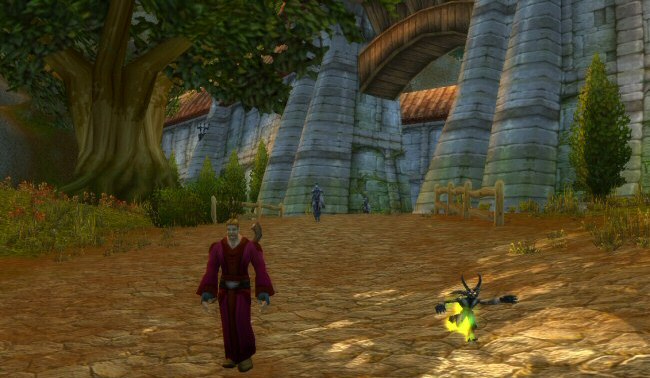 “So what’s so bad about Goldshire?” I ask once we’ve left the church behind. “Is it haunted or something?”

“You mean they got a bunch of nutjobs all locked up?”

I’ve written about Goldshire before. And here is a perfectly unsurprising bit of news from Goldshire.

Horde-side players will tell you that players act like nutters in Barrens Chat, but having seen both on multiple servers I can tell you that Barrens Chat is like the Council of Elrond compared to the Nutjob Sundae they serve in Goldshire.

Just for fun: In this entry, all of the dialog between other players will be in bold, and will be actual stuff people typed to each other while roleplaying in Goldshire. The names have been changed to protect the insane.

Norman shrugs, “Nobody knows, really. These are powerful adventurers. Sometimes they go out to Northrend and come back like this. Maybe they get out there to the edge of the world and realize there’s nothing there. Drives them crazy.”

I can feel the ground shaking a bit and there’s the smell of something burning. I can see flashes of light on the road up ahead.

“Anyway, watch yourself. This place can be dangerous,” Norman warns.

“Well then watch out for me, because I’m not.” 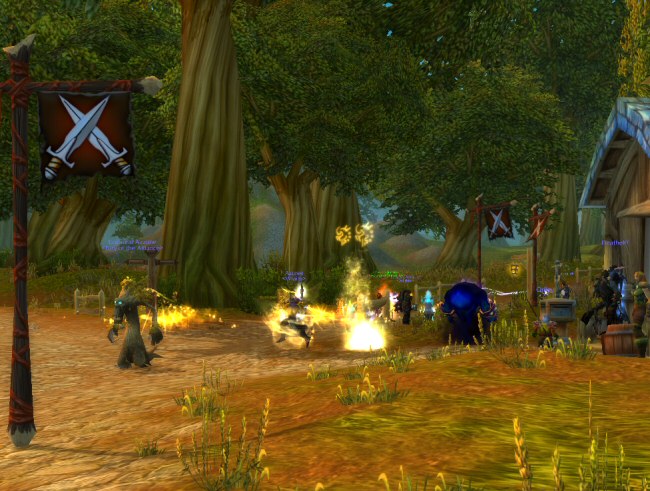 We arrive to find all-out war. Fire is raining down from the sky and robed figures are flinging exotic flavors of magic from their fingertips. There is the thunder of man-sized swords striking shield and hewing armor. Battlecries echo above the tumult.

“Looks like the town is under attack,” I say. 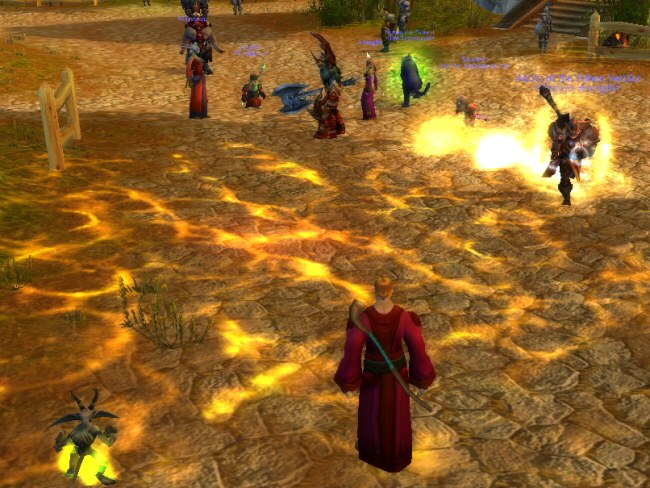 We pick our way carefully through the crowd of warring crazies, ducking sword blows and skirting around things which happen to be on fire.

Suddenly a man in glowing plate armor steps in front of us. His body is sheathed in lightning. In one hand he holds a hammer that a more sensible person might hold in two. The tip glows red as if it had been pulled from a forge only a moment ago.

There’s an awkward pause as the two men look at each other, Norman in his beggar robes and Hammer Guy in his epic regalia.

“Pardon,” Norman manages to squeak as he steps to one side. “Just passing through.”

“No. No thank you,” Norman says as we dart away.

Norman looks down at me, “They do this all the time. They won’t attack unless you agree to the duel.”

Hammer Guy pounces in front of us with a clank. “FIGHT ME!” he bellows again.

“FIGHT ME!” he calls after us as we head to the inn.

Q: What’s the second-most funny thing in the world?

Q: What’s the MOST funny thing in the world?

Bonus points if you accuse him of being “chicken” for refusing. I want Blizzard to add a feature to the game: Auto-ignore anyone who offers to duel me in Goldshire. 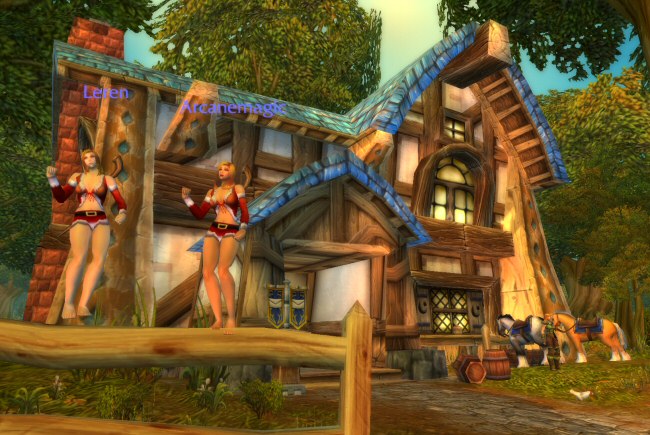 “We’re looking for twins dancing on a fence in their underpants? I don’t know what you’ve got planned, but I like it already.”

Boss leads us upstairs and begins nervously peeking into the rooms. 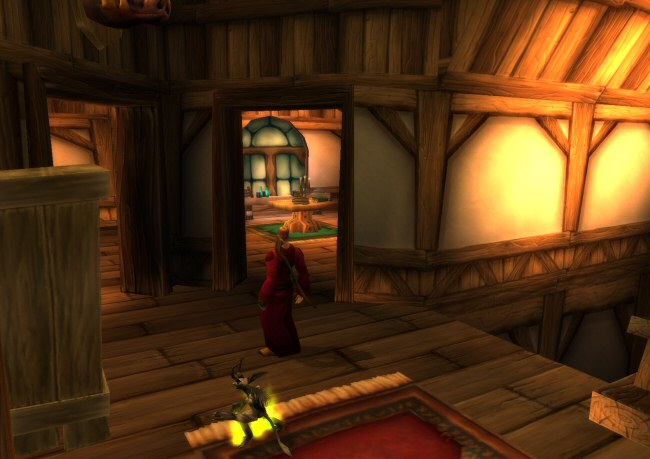 “I’m trying to find my Warlock instructor,” he hisses back in a stage whisper. “I know she’ll be around here somewhere. Probably hiding from all the crazy people.”

“What crazy people? You mean the weird guy peeking into all the occupied rooms and talking to his pet demon?”

“No. Crazy people like them,” Norman nods at a nearby room.

Inside, a woman named “Morrrigan” is giving a pep talk to some other adventuring types.

The other adventurers seem to react randomly. One salutes. Another laughs. Another breaks into dance.

Morrrigan continues, “Always unless they are utterly wrong follow the orders of your leaders. ALWAYS.“

One of her charges stops dancing to ask, “What leaders?“

“I have none,” another says.

“Hey,” Norman whispers as he nudges me with his foot. “Let’s go. My instructor isn’t up here.”

“You sure you don’t want to stay for the rest of this? You could learn a thing or two from this lady.” 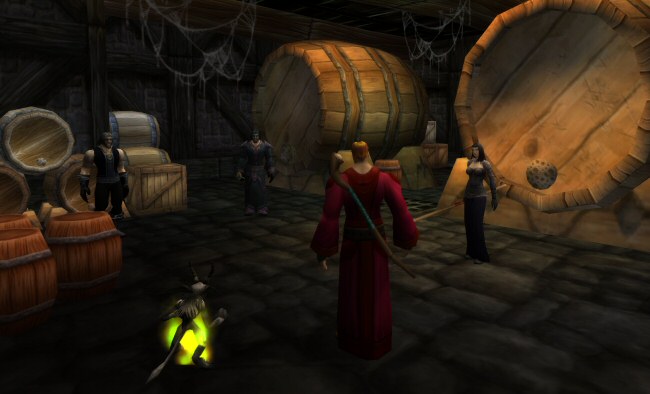 We eventually find the Warlocks in the musty, dimly-lit basement of the inn.

Norman talks to his teachers for a minute and then storms upstairs.

“So what new trick did you learn?” I ask.

“Nothing,” he answers dejectedly. “I can’t afford the training.”

“So? Kill one, and torture the other until she tells you what you want to know.”

“That would be wrong,” Norman says with a shake of his head.

“It’s the law of evil: That which does not kill you is a complete wuss that totally had it coming.“

“Now get in there and burn her down.”

“No. I know where to get some money.”

This can actually happen to new players. You may find yourself too broke to afford new abilities in the first few levels. It’s not a huge deal (this part of the game is still pretty gentle) but it means your first character will be the hardest. Later on you might start another character, but be able to use money and gear from your established one. Just a single gold piece – peanuts to even a mid-level character – is enough to vastly improve your gear and pay for every single upgrade for the first dozen or so levels.

In old MMO games this dynamic would lead to “beggars.” A newbie realizes that one minute of effort on the part of a high level character (which is how long it would take them to earn a gold) could save them an hour or more of time by easing the leveling, reducing the number of trips back to town, and saving them from a few corpse runs.

In WoW this isn’t a very big deal as there are other ways to get your character rolling. Keep an eye out in trade chat or guild recruitment chat. Often someone will be starting a new guild and will need signatures on the guild charter. These people don’t actually want you in the guild – they just want your signature. You can sign and then quit the guild as soon as it’s formed. High level characters will usually pay between one and ten gold for this service, which ought to be enough to launch your career as a budding adventurer.

In the meantime, don’t forget to collect and sell all the stupid little rubbish items you find on monsters… 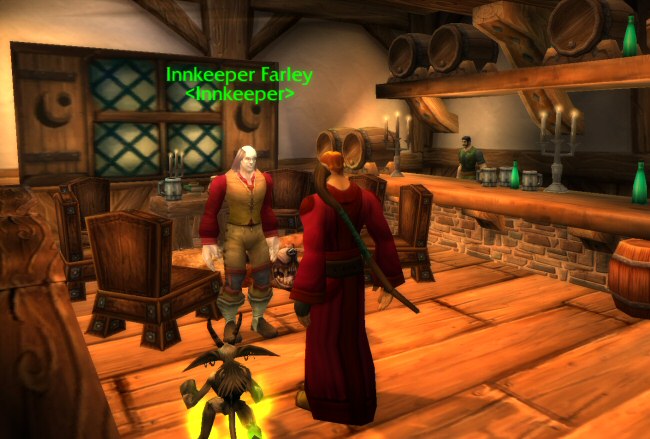 “Okay, here is a broken fang from some kind of animal, an old boot, a couple of shreds of cloth, and I think this is a bit of skin from a diseased wolf,” Norman says to the innkeeper.

We’re standing in the busy dining area of the inn. There’s a roaring fire going here and a few adventurers have gathered around it to warm themselves despite it being the middle of the afternoon. And summer. Other adventurers are sitting or walking about, having energetic and disjointed conversations.

“A pleasure doing business with you!” the innkeeper says as he hands over a few silver coins and accepts the armload of random crap.

“What in the name of completely awesome are you doing?” I ask once the transaction is complete.

“Ah,” Norman says. “The trading? Yeah. Something I figured out a few months ago. Apparently all the shopkeepers in Azeroth are barking nutters. They’ll buy almost anything you’ve got on you. It’s how I paid for tuition for mage school.”

“You went to mage school?”

“Eh. For a couple of months, until I flunked out. Mother thinks I’m still there.”

“You flunking out of mage school certainly explains a lot,” I observe.

“Oh hush. So I have to save the kingdom with demon power instead of arcane. Big deal. It’s all the same to me as long as the place gets saved.”

“That’s a very open-minded viewpoint,” I tell him. “I’m starting to really hate your guts a lot less.”

“Well, it’s only a good plan as long as mother doesn’t find out.”

I tilt my head to one side, “What is this about your mother? You keep bringing her up. How old are you, anyway?”

I point a gnarled black finger at him, “Don’t you think you’re old enough at this point to pick a career without asking your mum first?”

“It’s complicated. The important thing is that she never, ever finds out.”

“What’s so dangerous about that?”

Norman opens his mouth to answer, but he’s drowned out by a human warrior who yells, “I’m going to rape her!” He’s pointing at another adventurer to indicate his intended victim.

It’s a bit odd, since she seems to be at least a match for him. Nevertheless, she cowers at his feet and cries out, “No! I don’t want to be raped!“

“If you rape her I will kill you!” booms a voice from outside the inn. Someone obviously feels very strongly about this situation, but isn’t quite worked up enough to come in here and get involved.

A grim looking night elf who is warming himself by the summer afternoon fire observes, “In the future, rape is a felony.“

Norm sprints outside with his hands over his ears so that none of the crazy leaks in.

“So where to now, boss?” I ask once we emerge into the lazy, late-afternoon melee of Goldshire.

“We need to find Marshal Dughan,” he replies.

“The head of the militia here in Goldshire. Marshal McBride gave me this document,” Norman holds up a letter. “It’s addressed to Dughan.” 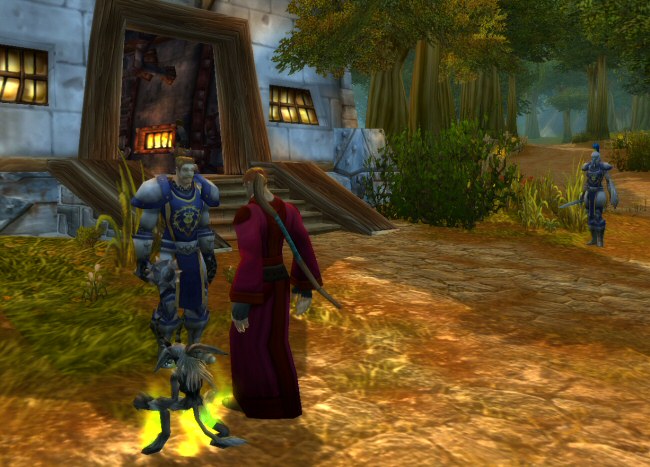 “Congratulations!” Marshal Dughan says after he’s looked over the documents. “It says here you’ve been awarded acting deputy status with the Stormwind Marshals.”

“And good luck!”, Dughan adds. “Keeping Elwynn forest safe is no picnic … what with most of the army busy doing who knows what for who knows which noble!”

“Will I be getting some official armor or anything?” Norman asks.

“Oh. Well, do I get any sort of insignia to denote my new status? Maybe a badge or a document to verify …”

“So … do you actually plan on telling anyone I’m a deputy?”

Dughan thinks for a moment, “Probably not.”

“You get to investigate the Fargodeep mine. I’ve got reports of Kobolds there. I’d like you to go and confirm this.”