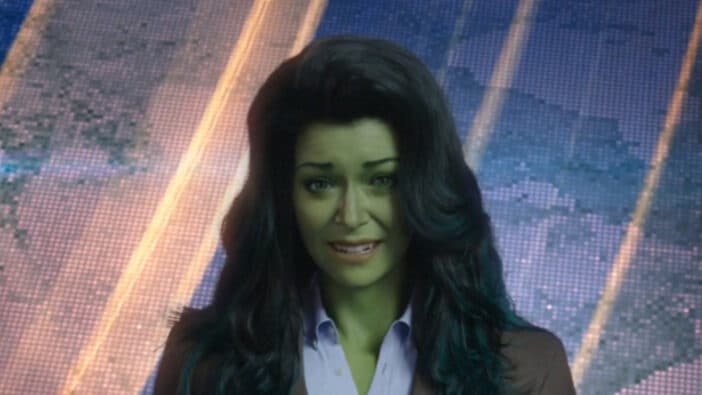 This discussion and review contains spoilers for She-Hulk episode 3, “The People vs. Emil Blonsky.”

With “The People vs. Emil Blonsky,” it’s possible to get a sense of what a more functional version of She-Hulk might look like. It’s still a bumpy and uneven episode, but it represents an improvement on both “A Normal Amount of Rage” and “Superhuman Law” by establishing a template that feels more sustainable. One of the bigger issues with the Disney+ streaming shows built around established brands like Marvel or Star Wars is that they tend to feel a bit like “content soup,” shapeless content cut into arbitrary weekly portions.

There is a tendency to talk about streaming shows as extended feature films with the end credits providing convenient bathroom breaks. The creators of Game of Thrones talked about it as “a 73-hour movie.” The creators of the upcoming Addams Family spinoff, Wednesday, envisaged it as “an eight-hour Tim Burton movie.” This is exhausting, because it misses part of the formal appeal of a television show. Individual and self-contained episodes are a good way of advancing a story, even a serialized one.

WandaVision began with a clear weekly structure that paid homage to television history, but the backend of the season degenerated into an extended and familiar Marvel Studios movie. It’s notable that the total runtimes of the various Marvel streaming shows, including WandaVision (270 minutes), What If…? (249 minutes), and The Falcon and the Winter Soldier (266 minutes), are directly comparable despite varying numbers of episodes. They often feel like movies carved into chunks.

With nine half-hour episodes, She-Hulk will likely end up with a comparable total runtime to the examples cited. Watching the first two episodes, it could feel like She-Hulk was falling into the same trap as something like Hawkeye or Moon Knight, telling a single formulaic superhero story that was padded out to fill an absurdly inflated runtime. “A Normal Amount of Rage” was a rather inert origin story flashback, while “Superhuman Law” continued that origin by setting up the show’s status quo. 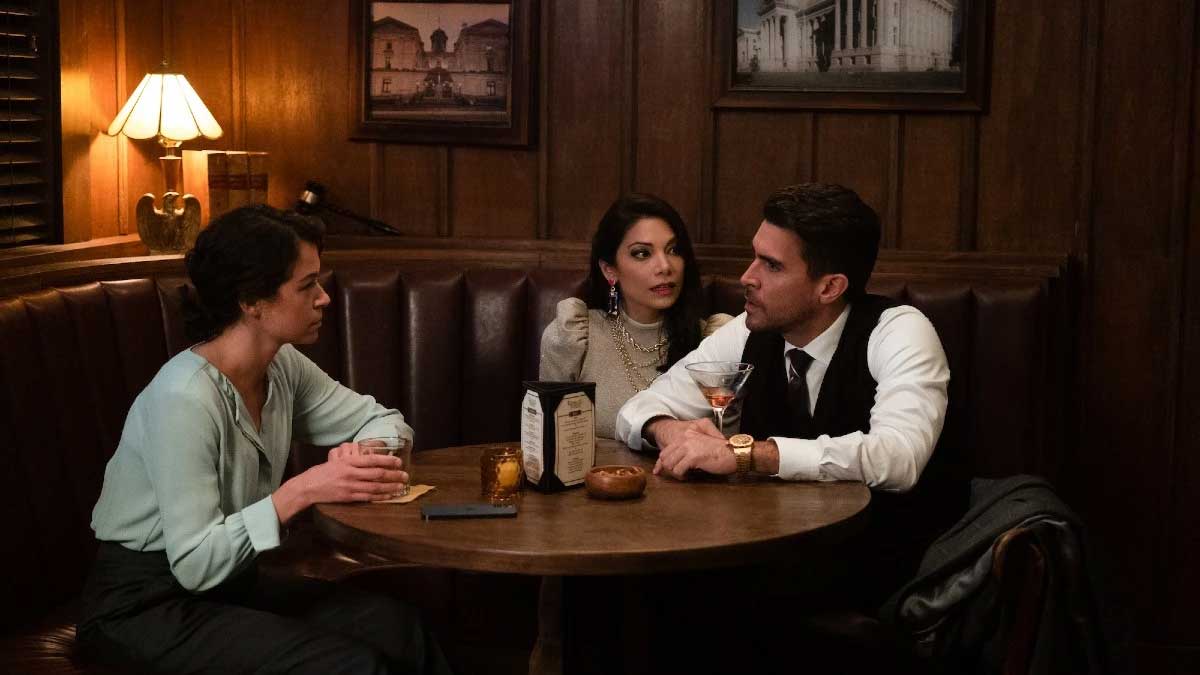 Head writer Jessica Gao has acknowledged that her original vision for the show was much more serialized. “When I went in, it definitely skewed a lot more heavily towards Blonsky’s (Tim Roth) trial,” she told Variety. “In my original pitch, it was an actual trial and it spanned multiple episodes. When we got into the writers’ room, inevitably things change as you’re developing the show and as you start writing.” “The People vs. Emil Blonsky” suggests that the show drifted away from that idea fairly early on.

That said, it might have been fun to do a proper and committed season-long arc that would be a knowing riff on the cult television movie, The Trial of the Incredible Hulk. In that same interview with Variety, Gao acknowledged The People v. O.J. Simpson: American Crime Story as an unlikely influence for She-Hulk, and it is frankly thrilling to imagine a surreal superhero television riff on that. It would be utterly unlike anything Marvel Studios had done before.

However, given the limitations of the Marvel Cinematic Universe (MCU) in dealing with things like consequences and its reluctance to really embrace the sort of weirdness present in shows like Legion, it is perhaps for the best that She-Hulk retreated from that original idea. Instead, “The People vs. Emil Blonsky” demonstrates a sort of template for how the show might work as a weekly streaming series for the next six episodes. It is a relatively self-contained episode of television with its own internal story.

Adhering to the classic episodic television model, “The People vs. Emil Blonsky” splits its runtime across two plots running in parallel. In the first plot, Jennifer Walters (Tatiana Maslany) finds herself managing the parole process of supervillain Emil Blonsky, struggling with Wong (Benedict Wong) as an unreliable witness. In the second plot, Augustus “Pug” Pugliese (Josh Segarra) is tasked with managing a fraud case involving a shape-changing elf (Peg O’Keef) who impersonated Megan Thee Stallion (herself). 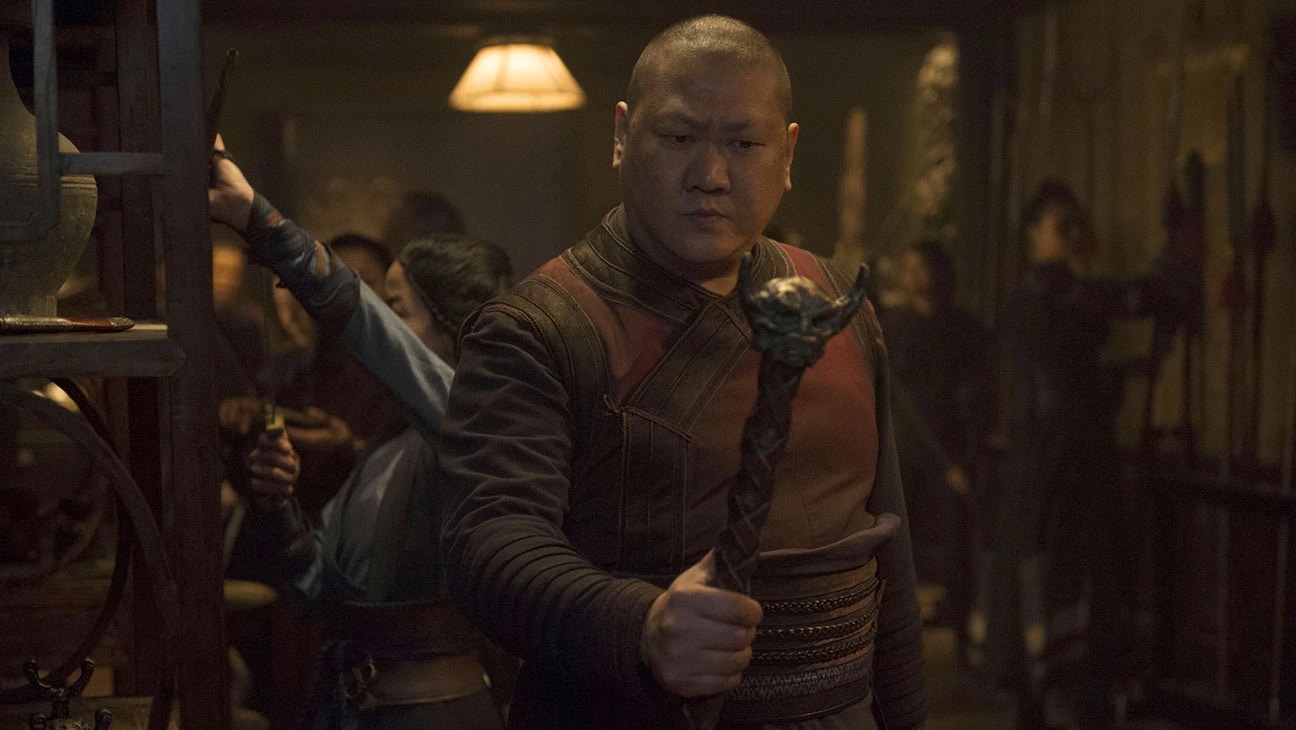 Just structurally, this is a reliable storytelling model. One of the bigger issues with these extended and bloated streaming shows is that the single serialized story model leaves little room to develop the supporting cast. Moon Knight was a particularly egregious example of this, with only Oscar Isaac receiving any meaningful material, while other cast members like May Calamawy and Ethan Hawke had to do what they could with only a handful of scenes. These shows can waste talented casts.

In contrast, splitting an episode across multiple parallel threads means that the production team has to involve supporting players in the stories that they are telling. Jennifer Walters cannot steer both subplots simultaneously, so Pug gets some much-needed screentime. He’s hardly a complex or multifaceted character, but he has already received more to do than some credited leads on Hawkeye. It is easy to understand why this was the default mode of television scripting for decades.

The best and worst thing about “The People vs. Emil Blonsky” is that it feels like a functional proof of concept. In theory, it demonstrates how this model could be used in interesting ways. In practice, both individual threads are quietly underwhelming. It can be difficult to critique comedy, since humor is a particularly subjective artform, but She-Hulk has fallen into the trap where it is a half-hour workplace comedy that simply isn’t consistently funny enough.

The primary plot involving the parole hearing for Emil Blonsky has a few funny moments in it, but it doesn’t hold together. Ironically, the biggest problem is its complete lack of internal logic, as well as the fact that She-Hulk isn’t absurd enough to turn that into a strength. At the end of “Superhuman Law,” Blonsky’s hearing was sabotaged when footage of him fighting Wong from Shang-Chi and the Legend of the Ten Rings was broadcast, implying that he had already escaped from custody. 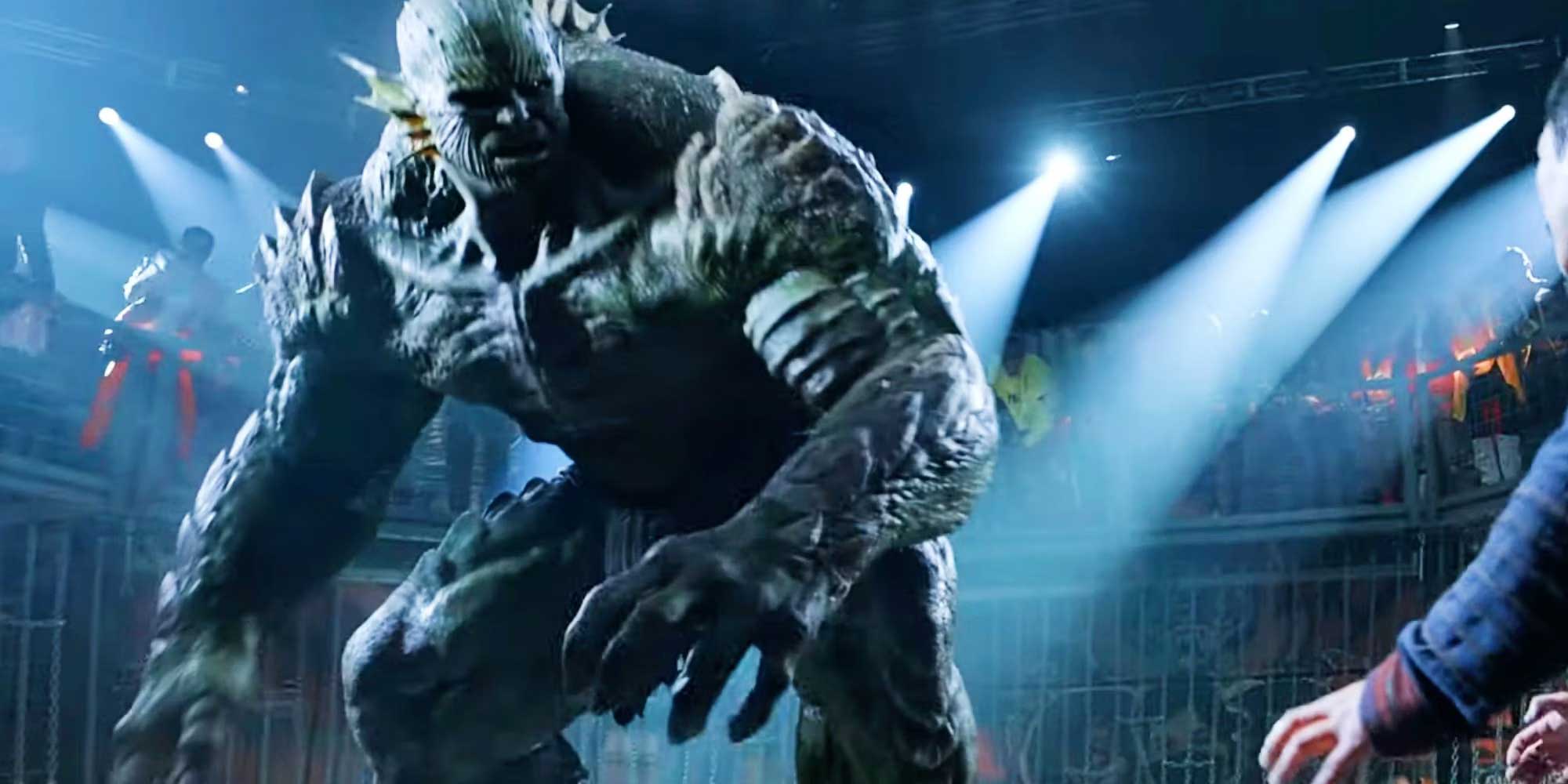 “The People vs. Emil Blonsky” very quickly brushes by an explanation for Blonsky’s cameo in Shang-Chi. Seemingly, Wong needed to test his strength as Sorcerer Supreme and chose Blonsky as a worthy opponent. As such, Wong broke Blonsky out of prison and engaged in some mystical martial arts with him, before safely returning Blonsky to his cell at the end of their confrontation. It’s certainly not the most ridiculous idea in the history of comic book storytelling.

The problem is that none of this withstands even the most cursory logic. If Wong wanted a sparring partner, why not pick Bruce Banner (Mark Ruffalo), whom he met in Avengers: Infinity War? Sure, Bruce might have been in space by that point, but Stephen Strange (Benedict Cumberbatch) could get from Titan to Earth quickly enough in Avengers: Endgame. Why would Wong pick somebody whom he didn’t know? Why would he pick Blonsky from inside a maximum security prison without asking?

More than that, why would Wong insist on fighting this partner in an underground Macau fighting arena operated by Xu Xialing (Meng’er Zhang)? Was Wong collecting a piece of the action from all the audience members gambling on the fight? That seems somewhat unethical for a Sorcerer Supreme, particularly given that both Doctor Strange and Doctor Strange in the Multiverse of Madness established Wong as something of a stickler for the rules and traditions.

The obvious answer to all these questions is: “Wong fought Blonsky in Macau because it made for a cool set piece in Shang-Chi and the Legend of the Ten Rings, and it’s really not something that people should think too hard about.” That is a perfectly reasonable answer in the context of She-Hulk, a show that aspires to half-hour sitcom vibes. It is no more or less absurd than any setup on something like Friends or Fraser, albeit framed through the lens of a $200 million superhero blockbuster. 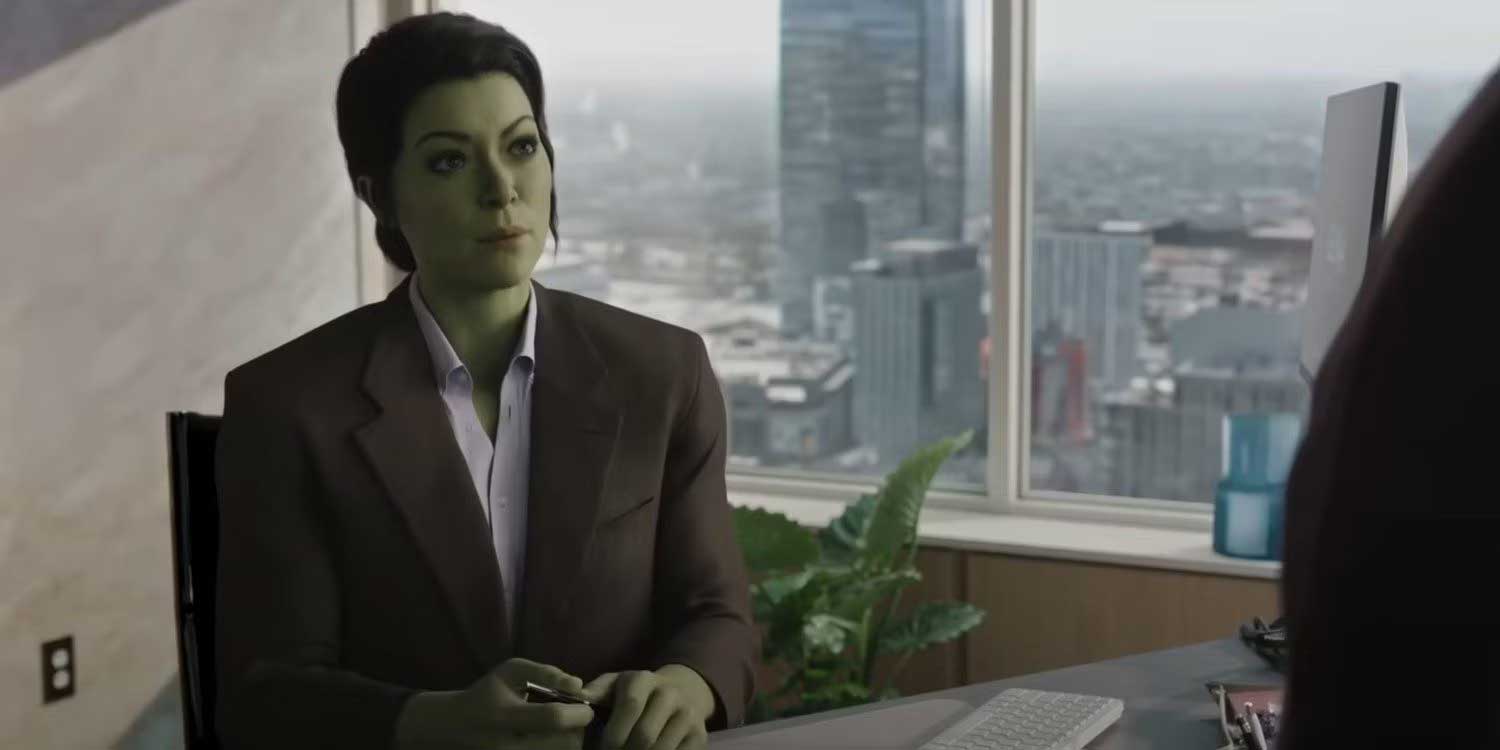 What’s the point in being able to break the fourth wall if She-Hulk can’t say this? Jennifer should be able to turn to the camera, stare at the audience, and joke about how she just got undermined by the writers of Shang-Chi. Comics writers and artists regularly appeared in older comics. She-Hulk writer John Byrne wrote himself into his Fantastic Four run as a witness in the Trial of Galactus. It might have been fun to have Jennifer call Destin Daniel Cretton to the stand.

With that glaring distraction, the decision to build the tension around whether or not Wong will bother to show up feels like it misses the forest for the trees. “The People vs. Emil Blonsky” treats Wong’s testimony as the silver bullet that clinches Blonsky’s parole, but in reality it just raises more questions than it answers. The fact that Wong is late showing up for the parole hearing is somehow less of an issue than the fact that his testimony makes no sense even by the standards of comic book logic.

Similarly, the subplot involving Dennis Bukowski (Drew Matthews) doesn’t really work. Going back to “A Normal Amount of Rage,” Bukowski has been a way for the show to mock a particular kind of “almost pathologically entitled man,” to the point that his name feels like part of the joke. There is certainly value in doing this, and it’s nice to see She-Hulk actually confront the sort of misogyny that is just part of the online background noise around female superheroes.

However, “The People vs. Emil Blonsky” fails to find a joke or make a point about this misogyny beyond noting its existence in the broadest terms. “They took the Hulk’s manhood away, but then they gave it to a woman,” complains one online troll. “I have no problem with female heroes,” another remarks. “I’m just saying, make your own.” Yes, this is the sort of nonsense that gets spread online, and it’s good to acknowledge it — but what does She-Hulk have to actually say about it? It doesn’t go anywhere.

“The People vs. Emil Blonsky” does represent an improvement on the first two episodes, because it at least has the semblance of a functional narrative. It’s possible to see how this is a shape that could produce a compelling and engaging television show. Unfortunately, She-Hulk is not quite there yet.