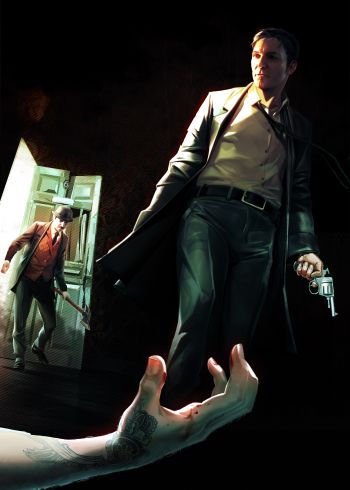 Since the early 2000s, we’ve seen six Sherlock Holmes games from Frogwares Studio, which have all utilized Frogwares’ in-house graphics engine. The previous installment, The Testament of Sherlock Holmes was the first to give up the traditional point-and-click gameplay that had largely defined the series, in favor of a third person experience. With the adoption of Unreal Engine 3, the next game, Sherlock Holmes: Crimes and Punishment will take the evolution a step further, putting the player directly in the role of the master sleuth himself.

Crimes and Punishment offers a number of very Holmes-like mechanics, such as a vision toggle that highlights points of interest so you don’t have to personally examine every inch of every screen. Likewise, when you meet a character, you’ll get to examine them, as Holmes is wont to do, and create a detailed background of their personality and habits. If you’ve enjoyed the recent Sherlock from BBC, or just appreciate Sir Arthur Conan Doyle’s literary treatment of the ultimate investigator, you’ll probably get a kick out of using some of these techniques.

Another big change in Crimes and Punishment is the switch from focusing on a single case to having six smaller cases to work through in the game. It appears to be a progression, so you won’t be working on multiple cases in parallel. Additionally, the choices you make in each case can influence how the rest of the game plays out. It will even let you incorrectly solve a case, perhaps putting an innocent man into prison, which will have implications through the rest of your game.

Moral choices show up when you solve a crime – such as whether to throw the book at your perpetrator or let them off with a warning – though Holmes never really struck me as one torn by moral dilemmas, so I’m not sure how much love this feature will get from serious Holmes fans. That said, it does add an interesting dynamic to the game by creating even more branching paths for the story, even if it seems a little out of character.

It doesn’t seem likely that this will be a game for everyone, but if you’ve enjoyed previous iterations, it’s almost certainly something you’ll want to check out. Likewise, if you’re a Sherlock fanatic, it could be worth your trouble to slip into the shoes of the world’s most famous investigator.

Crimes and Punishment is slated for a 2014 release – no specific window has been announced – across PC, PS3, PS4, and Xbox 360.