This week’s review topic, Rise of The Planet of The Apes, is a great monkey movie. And I should know – If there’s one thing I know even better than movies, it’s movies about monkeys. If a film has some ape related action going down, you can bet it’s crossed my path. So if Rise has you seeking a higher quotient of “Thrillas with Gorillas,” here’s some of the more interesting offerings I’ve come across:

Italian megaproducer Dino DeLaurentis suffered possibly his most infamous public humiliation when his bloated, colossally hyped 1976 remake of King Kong – which he’d brazenly promoted as a Jaws killer – opened to bad reviews, audience indifference and the revelation that it’s highly touted gimmick of a life-sized mechanical Kong was only used (poorly) in a single scene.

However, the embarrassment didn’t prevent him from holding on to the rights to the franchise (and waging lawsuit wars with anyone who even thought of using the word “Kong” in reference to a gorilla movie) and in 1986 he and his partners finally made this sequel. Is it good? No. Is it fun? Oh hell yes.

As it turns out, King Kong didn’t die from his fall at the climax of the original remake – he simply went comatose, and has been recuperating in a secret government lab ever since. But his heart is giving out, and though a (huge!) artificial one has been constructed, the operation to install it will require a blood transfusion… easier said than done, given that this is the only Kong they’ve ever found. And when they do find another, it turns out to be a female with whom Kong becomes immediately smitten and escapes with – yes, it’s a “fugitive lovers” movie, but with giant scale apes. The film’s signature scene, where Kong’s heart transplant is performed with a crane and a team of doctor’s standing on his chest operating with chainsaws, is the obvious highlight.

Already gave this one a shout out in a Big Picture aways back, but it’s worth repeating all the same. This was a live-action, Japanese produced spin-off of the 1960s Kong cartoon show, in which a mad scientist – upon learning that the giant robot doppelganger of King Kong that he built to mine a precious mineral actually shuts down in the presence of said mineral – kidnaps the big ape in order to force him to do the mining. I do not recommend trying to make sense of that plan in your head.

Naturally, the big draw is the giant-monster battle between Kong and Mecha-Kong, wherein the two smack each other around while climbing Tokyo Tower. Japanese monster fans take note: While this is not officially a sequel to King Kong Vs. Godzilla, the dinosaur Kong battles (“Gorosaurus”) later joined the Godzilla franchise in Destroy All Monsters.

Also known as Goliathon, this is yet another spin on the bizarrely enduring “white woman raised in the jungle by gorilla” genre of which Mighty Joe Young is the best remembered, but hardly the first entry. This is Hong Kong’s turn at the formula, with an atypically humanoid giant creature (he’s supposed to be more of a bigfoot than a gorilla) and the fetishistic aspect of the blonde-jungle-goddess bit turned up to eleven. Takes awhile to get going, but fun once it does.

A low budget Korean Kong knockoff, made to cash in on the hype for DeLaurentis’ remake in 1976. Many consider this to be the “worst” of the Kong rip-offs … I don’t know about that, but it has the worst ape suit of them by far. The early highlight features the ape fighting what is supposed to be a great white shark. 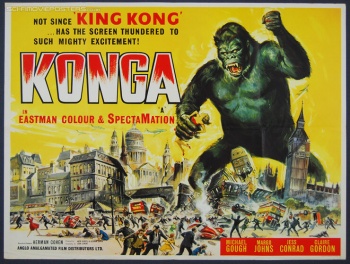 This is one of my all-time favorite mad scientist movies, courtesy of British horror specialists Hammer Studios. Michael Gough (“Alfred” from the first four Batman movies) is a gleefully wicked doctor who comes back from Africa with carnivorous plants and a pet monkey he forcibly evolves (it’s that kind of movie) into a gorilla-sized bruiser to murder his professional rivals.

His unrequited-love-afflicted housekeeper actually has no problem with this (so long as he’s willing to “marry” her and play proper-British-upscale-couple on the social scene) but when he gets romantically fixated on one of his buxom teenaged students (it’s that kind of movie) she turns Konga into a Kong-scale behemoth for revenge.

Greystoke: The Legend of Tarzan

This ahead-of-its time 80s curiosity got in on the “dark-and-gritty-realism-applied-to-goofy-pulp-character” trend before it was a trend, attempting to create a more plausible version of Edgar Rice Burroughs famous “Ape Man” hero. Christopher Lambert (really!) has the title role, opposite a bunch of actors in alarmingly convincing Rick Baker ape suits.

The first half – with Tarzan rising to “king” of his adoptive ape family – really kills; but the “encounter with Victorian humanity” stuff (which is where this should soar) falls a little flat. It’s all very well intentioned, but it hits the “this is why this wasn’t meant to be played seriously” wall pretty hard and doesn’t really recover.

Perhaps more well known (if not well seen) as “the Charlotte Rampling sleeps with a monkey movie,” this is an oddball satire where a British ambassador to France who suspects his (French) wife of infidelity discovers that her paramour is actually a chimpanzee named Max. I may have name dropped this in another column, but what can I say? I like people’s reactions to this being a real movie.

It’s all meant as a broad satire of the culture clash between stoic British appearance keeping and French libertinism – the “racy” stuff is all left to the imagination, so it mostly plays out like a Disney-style “exasperated dad versus wacky pet” movie with a reeeeaaaalllllyyy kinky undercurrent.

Monkey Shines: An Experiment in Fear

One of George A. Romero’s better non-zombie films, this is a unique horror flick about a bitter, recently paralyzed man who gets a trained helper monkey to aid him around the house. At first they get along well… and then it becomes too well.

His friends and acquaintances begin to suffer suspicious injury and death, and it’s soon apparent that he and the monkey are so “in sync” that she’s carrying out the bitter fantasies of revenge and payback that he’s not even fully aware of himself. It’s a remarkably effective premise, and deserves to be more widely seen.

It’s technically a short-lived, “only in the 70s” cult TV series, but also available on DVD.

It’s a James Bond spoof, with a rotating squad of chimpanzees wearing chimp-scale mod fashions and acting out dubbed slapstick on alarmingly elaborate sets. So yes, Austin Powers with monkeys. If nothing else, worth seeing to realize that at some point in the recent past there was actually enough cocaine being consumed in Hollywood that this premise was greenlit, funded, produced and made it to broadcast television.