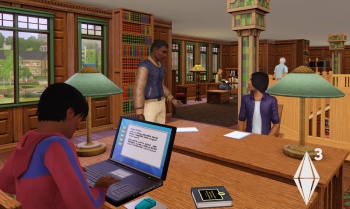 The Sims 3 has sold 1.4 million copies in its first week on shelves, making it the biggest PC launch in EA’s history.

In case you didn’t know, The Sims is a pretty big franchise. In fact, one might even call it the biggest franchise – a quick trip over to Wikipedia tells us that The Sims, The Sims 2, and their assorted expansion packs have sold a combined 100 million units worldwide, making it the most successful videogame franchise of all time.

Time to add another million to the list: Despite early leaks and piracy, The Sims 3 has already sold 1.4 million copies in its first week. While not quite selling 2.8 million in one day, it’s still a damn respectable launch. In fact, it’s the biggest launch for a PC game that publisher EA has ever had.

The scope goes beyond simple retail numbers – the company has reported that there have already been over seven million downloads of user-created content like houses and Sims to populate your neighborhoods with.

Of course, this leads to an interesting question – would there be so much player-created content already if the game hadn’t been available for several weeks before its launch? One can only wonder.

“With more than a dozen press awards, strong reviewer scores and positive feedback from The Sims community, we are thrilled with the success of The Sims 3 launch and the early sales indicate that we have another hit on our hands,” said Rod Humble, the head honcho at EA Play.

Yeah, Rod. I mean, no one could have ever predicted that The Sims 3 would have been a hit. Totally out of left field, that one. You guys must be channeling freakin’ Nostradamus over there.

“n00b” Beaten Out as One Millionth Word