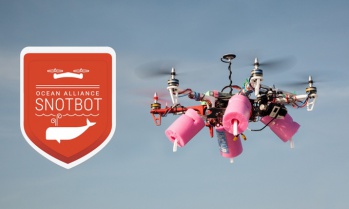 Sir Patrick Stewart is lending his considerable acting talent to raise awareness of the SnotBot Kickstarter campaign, which is building a flying robot to collect whale mucus.

It is one of the most memorable scenes in the history of Star Trek. Patrick Stewart’s Picard is set on revenge against the Borg; Lily, played by the great Alfre Woodard, chastises him: “Well, it looks Captain Ahab has to go hunt his whale… snot.”

In a Kickstarter campaign launched on Saturday, P-Stew joins his friend Iain Kerr of Ocean Alliance to ask for your help in funding Snotbot. What is Snotbot, you ask? Why, it’s a remote-controlled flying drone that hovers over whales and waits for them to exhale through their blowholes. The little robot collects as much of the exhalation as it can, then returns to its home boat to deliver its payload: fresh whale mucus. Yum!

The mucus that lines the lungs of a whale or Starfleet officer can tell us a lot about the animal in question. Much like a blood sample, the cetacean goobers are filled with DNA, hormones, virus and bacteria loads, environmental toxins, and much more. Once the snot rockets have been examined, biologists can then tell exactly which whale they are looking at, what their stress levels are like, how close they are to mating, if they are sick or well, and if something in the water is dangerous to them.

Unlike a blood or tissue sample, though, being sneezed on by a beautiful marine mammal is non-invasive (for the whale). The bot is already built; the Kickstarter is to fund its use in the field.

Check out Escapist’s coverage of other big Kickstarters here.

This makes at least two captains of the Enterprise that are really fond of whales. While this little bot itself isn’t directly Star Trek related, it is interesting how so much science news recently seems to tie into the venerable franchise somehow.

So? How much did you pledge to supply a knighted British actor with his own supply of whale snot?

Note: Sir Patrick Stewart does not collect whale snot for his personal use.

Southpaw – Can There Be An Original Boxing Movie?