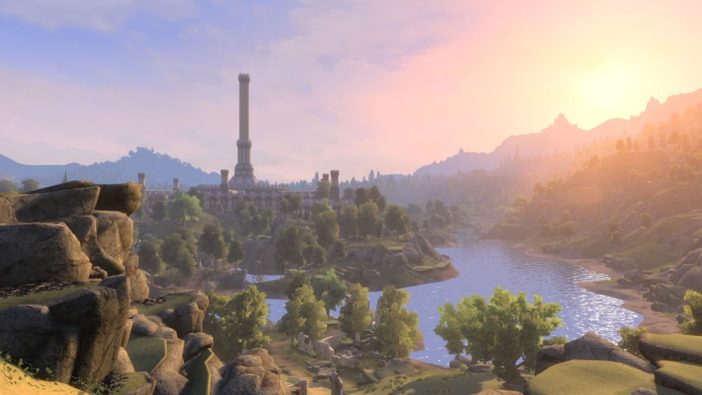 Skyrim’s modding community is dishing out one of the game’s most impressive content packs yet with the upcoming “Skyblivion.” If the project’s name is not enough of a tip, Skyblivion aims to combine The Elder Scrolls IV: Oblivion with The Elder Scrolls V: Skyrim for one reimagined Elder Scrolls experience. Maps, quests, enemies, and more are all being created by a dedicated volunteer modding group called TESRenewal. Watch the content’s new teaser trailer down below.

Players will have the freedom to explore Tamriel’s Cyrodiil and all of its quests once again or for the first time when the project launches.

“Ambitious” only begins to describe what the team of more than 50 developers is creating with Skyblivion. The project has been in development since 2012 — only one year after Skyrim’s original release — and has a website, a wealth of concept art, and obviously much more.

For the team, Skyblivion is more than a simple mod:

We have been hard at work these past few years and recently a lot of that work has fallen into place, finally shaping up to what we can call a proper video game. We are super excited to see all our hard work pay off, more importantly though, we are excited to show those who have supported us all this time what it has been for. It’s been a long ride, but we are finally at a point where the end is almost in sight.

TESRenewal is still looking for help with bringing Oblivion to Skyrim though, specifically regarding 3D and coding areas. If you are a developer who is looking to help in other ways, the team is always willing to bring on CK modders and texture artists.

Gameumentary tackled more from The Elder Scrolls’ robust community earlier this year when they talked with the Skyrim Grandma, Shirley Curry.

Skyblivion does not have a PC release date yet, but it will be completely free when it arrives. However, to play the game, know that you will need to own Oblivion and its Knights of the Nine and Shivering Islands DLC, as well as Skyrim and its Dawnguard, Hearthfire, and Dragonborn DLC.