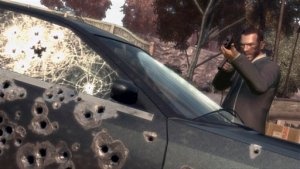 I have to admit to a certain reticence when it comes to praising games. Like most writers, I can usually find something not to like about a game, and those bits usually make the best copy. But 30 hours into Grand Theft Auto IV I can easily say it’s my main contender for Game of the Year. Hell, it’s in the running for Game of the Decade. I’d even go so far as to say it’s the best game I’ve ever played.

Comparing notes around the office, I also have to admit that I play incredibly slowly. It’s been rumored this is a 60-or-so-hour game, which would theoretically put me at the halfway mark, but there’s no way in hell I’m halfway through this game. In fact, the game’s stat page tells me I’m closer to a third of the way into the main story, with plenty of side missions and random, unscripted events still left to uncover, and that thought fills me with unabashed glee.

I usually start up a Grand Theft Auto game prepared to suffer through overblown characterizations and poorly rationalized plot devices just to get to the meat of the game – blowing shit up and running from the cops. But this time out, the main storyline is incredibly well-written, acted and directed, and a joy to behold on its own. In fact, as with the best games, this story could very easily stand on its own without all that game-playing crap in the way, which is something you can also say about the game-playing crap; and seldom do the two get in each other’s way. Savor that. You rarely get the chance to experience an interleaving of story and gameplay as smoothly and painlessly as you will in GTA IV.

BioShock got it right, mainly by creating a kick-ass story and then shelving it, leaving it there for you to discover – or not – as you chose. In GTA 4, as in the previous installments in the series, Rockstar went the cinematic cut-scene route, but this time pulled it off so flawlessly that you may have heard the last of the debate on whether that game element will ever die out. To be fair, a large portion of GTA IV‘s story is told in-game, through Star Trek-like dialogue, as characters are walking or driving to and fro, and over the phone when characters ring you up to chat; but neither the cinematics nor the in-game elements drag on long enough to annoy. It’s a master class in how to keep an audience interested, as Ken Levine put it at this year’s GDC, in “your stupid story” while not standing in the way of their fun.

If playing all the way though the scripted missions just to get the meat out of the story is your bag, you can do that. If, however, you’re like me, and you like to circle around the story, poking at all the extraneous junk around the periphery before digging in and proceeding along the charted course, you can do that, too. In fact, you don’t even have to experience a single mission to get 20 hours of fun out of this game. Steal a car, swipe a police cruiser and let the fun begin. You’d be surprised how entertaining a good police chase can be. Especially when you take a wrong turn, hit a ramp and land on the elevated train tracks, then tear off into the subterranean tunnel system, police helicopters in tow. 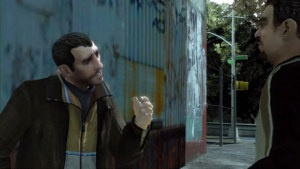 None of this is new to Grand Theft Auto; the series pioneered the open-world genre, spawning a succession of clones, a few of which, like Mafia, managed to improve upon the core philosophy by picking up a single element and running with it. In Mafia you play as a would-be Mafioso, stealing cars and bootlegging in a Prohibition-era city heavily inspired by Grand Theft Auto’s city planners. The streets are teeming with random, faceless passersby just waiting to be mugged or trodden upon, and every car is a short lock pick away from residing in your garage. Grand Theft Auto IV returns the favor, and shows that Rockstar is not only paying attention, but are gracious and talented enough to take suggestions and deliver beyond all expectations.

What set Mafia apart from other Grand Theft Auto clones was largely its compelling story , which elevated your character from a taxi driver barely making ends meet to the lynchpin of a Mafia empire over the course of a sweeping narrative rife with loss, redemption and plenty of bloodshed. The story alone would have made a good movie, which is fitting, since it was undeniably inspired by at least a dozen of them. Yet the story often got in the way of the fun, and Vishnu help you if you ever had to repeat a mission. GTA IV not only knows when to shut up and let you play, but the spoken dialogue actually changes if you’re running a mission for the second or third time, meaning you’ll rarely find yourself singing along to monotonous dialogue as you trundle through the early part of a mission. It’s a wonder it took someone so long to think of this.

GTA IV would be improved, in my opinion, by the addition of a character garage, in which you can stash your favorite cars, like in Mafia, but in a game as perfect as this one, even that nitpick sounds hollow, as if I’m trying to justify my wage by finding one false note I can justifiably criticize. So while I’m at it, how about two more.

For starters, if you’re a series newbie, you might find the first several hours of GTA IV incredibly frustrating. I, for example, came late to Grand Theft Auto. I didn’t even own a console during the series’ heyday, but when I bought an Xbox in 2004, GTA III was one of the first titles I picked up. Then I didn’t buy another game for months. Few games present such a sweeping panorama of seemingly endless possibilities as GTA III, and even when you weren’t sure exactly how to progress the story, there was plenty of obvious fun to be had; from stunt jumps to random encounters, the joy was in excess, and there was never any doubt about how to dig into the fun.

GTA IV, by contrast, is far more subtle, a word one would never expect to bestow upon a Grand Theft Auto game. The hidden packages and side missions are much more cleverly hidden this time out, and Rockstar made an obvious decision not to hand-hold, but rather to allow players to experience the world at their own pace. Unfortunately, if you don’t know what you’re looking for, you won’t know that you should be looking for anything at all, and the game just feels like a vast, desolate wasteland in which there’s nothing to do. Like Arizona. This feeling dissipates about five or six hours in, but for however long it lasts, it can be a game killer. A more thorough introductory mission – perhaps optional – might have corrected that. 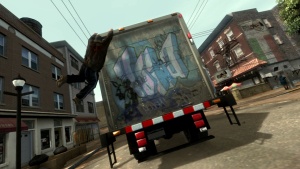 Also, for the love of all that’s holy, let’s take a serious look at the state of in-mission saves. Granted, the Grand Theft Auto series has its roots in the Playstation era, during which occasional save points were the best you could hope for, but the rest of the industry has moved on. There are plenty of reasonable methods for to creating tension and a feeling of urgency; dictating how and when a player can save his progress should no longer be considered one of them. Rockstar, I beseech you, give up the ghost. I don’t mind trying a race over and over again to learn the fine art of braking vs. speed, but when each attempt is prefaced by a meaningless drive from Point A to Point B, I start looking for needles to jab into my eyes. Both modern consoles have a hard drive. Use it, people.

OK then. Criticism voiced, wage justified, I can now carry on wetting my pants over this game – and playing it. I mentioned above I’d been playing for about 30 hours. That’s spread out over the course of about five days, by the way, one of which I hardly played at all. So I’ve been playing for almost eight hours a day since I bought it and leaving every play session wishing I could play more, regretting my body’s feeble need for sleep and food. This is rare for me. This describes my appreciation for this game far more succinctly than any amount of words could ever do.

Case in point: I took a day off from work to play this game. I never do that. Unfortunately, the day off didn’t go so well. I kept getting torn away by my ringing phone and pinging emails; only to return to the game where my character’s ringing phone and pinging text messages kept distracting me from nailing the perfect stunt jump, or swooping under bridges in a helicopter without crashing into the water. I was glad to discover the option to turn the phone off, something I need to learn how to do in real life.

I predict this game will fuel the fires of many a game writer for months to come. Prepare yourself for an onslaught of “Hero or Antihero?” and “What You Do in an Open World Game Says Something About Your Upbringing” articles, some of which may or may not be written by me. All pretensions to elevation of the medium through social discourse aside, however, I’m enjoying the shit out of this game. More so than I have any game in a good, long while.

Occasionally, I ask myself when playing a new game, “Is this a game I’d want with me if I were stranded on a deserted island?” Never mind that this island would require a sofa, a generous supply of scotch and electricity in order to make gaming there a viable alternative to painstakingly perfecting a shelter that can survive the ravages of wind and tide.

If you were asked to pick one game to help you stave off lunacy and the embarrassment of conversing with sporting equipment, which game would it be? For the longest time I didn’t have an answer to this question. Now I do. Compass, fire starter, knife and GTA IV. These are the things I’ll have in my pockets the next time I travel. Buy this game. Stop reading now and buy it.

Russ Pitts enjoys few things in life more than punching the accelerator in a fast, fat rear-ended American muscle car, tearing over a bridge in the rain, then heeling the wheel over hard and sliding into a complete 180. If someone is shooting at him, so much the better. His blog can be found at www.falsegravity.com