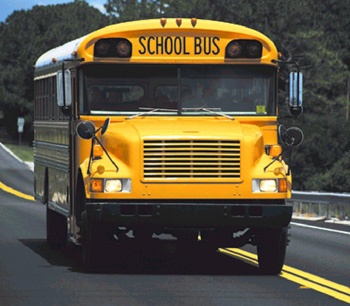 You can see the change in my school pictures. There’s a point in time somewhere between grades seven and eight where I practically became another person.

I realize I’m not alone in this. There’s an obvious biological explanation for it. We call it “the great change,” and it happens to everybody at around that age. (If it hasn’t happened to you, hang tough! It’s coming!) The body thins out, hair grows in strange places and your voice goes haywire. All of that happened to me between those two sets of photos and puberty explains a great many of the changes, but not all.

We can stay the course here, say that the hormones increased my awareness of breasts and that the adjustments I made to my appearance and behavior were designed to ingratiate myself to the owners of them. That would certainly be the easy answer. In fact, I’ve used this explanation myself – to myself – but I always knew it was a lie. The real reason I changed so much, so rapidly, was Bobby Kramer.

Bobby had it in for me from the start. I’d just transferred to a new school in a new town and knew no one. Few things now, as an adult, are as terrifying to me as that first morning of school, standing in the yard and waiting for the doors to open, surrounded by people who all knew each other, but who didn’t know me. I looked out of place. I looked wrong. Worse, I felt wrong, and I looked like I felt wrong. And I felt like I looked like I felt wrong. Nothing good could have come from this and nothing did.

This is where Bobby Kramer comes in. He walked up as if to say hello, stuck out his hand, grabbed my left nipple like it was a shower knob and twisted it until I was certain it would come off. Welcome to the new town, kid. Welcome to your new life.

This is the part where I wax philosophical on the act of twisting another person’s nipples. I don’t know exactly what I was expecting from my first day, but a nipple twist from Bobby Kramer wasn’t on the list. As introductions go, it was a bit extreme.

Bobby Kramer was, as far as people go, one of the worst I’ve ever encountered. He was a small person, terrified and afraid and he turned his fear into aggressive actions directed against those he believed could do him no harm. I’m ashamed to admit that in this estimation, in my case, he was correct.

The nipple twist on the first day of school was followed by a series of abuses, none too terribly invasive, but all traumatic. A knee to my thigh in the lunch line, a punch in the small of my back. A slap on the head. All little taunts devised to inform me of my place in the social hierarchy – below Bobby. Finally, one day on the bus, I’d had enough. Bobby was behind me as we filed to our seats. He punched me in the back and I ignored him as was our custom. Then he did it again. 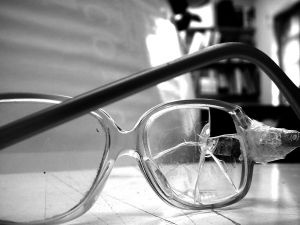 He obviously wanted a reaction – so I gave him one. I whirled around and shoved him. Bobby took two steps back and hesitated. I saw fear in his eyes and couldn’t believe it. He hadn’t expected this and didn’t know what to do. And then he saw the rest of the kids on the bus looking at him, also shocked, and he knew he had to do something so they wouldn’t see what I saw: his wide-eyed panic mingled with fear.

I didn’t see the fist (I never do) but I felt it. It was a tap on the face, barely hard enough to bruise, but hard enough to send my gigantic, church window glasses flying to the back of the bus. Bobby didn’t draw blood, but he felled me as easily as if he’d used a gun.

If you’ve never worn glasses, or didn’t as a kid, let me fill you in: Few things evoke such terror as the thought of them breaking. Especially if you really, honestly can’t see without them, as I couldn’t. My glasses went flying and my tough guy pretensions went right along with them. Without a thought, I chased my glasses across the bus, clambering over dropped backpacks, leaping and stretching out my arms to cushion their fall. I practically screeched as I saw – in slow motion – my glasses impacting with the floor of the bus, where they broke into two distinct pieces, each performing an elegant pirouette as it skittered under the seats.

Time resumed its normal pace and I heard laughter. I turned and saw Bobby taking a blurry bow and knew he hadn’t won so much as I’d lost.

Sitting in the restaurant this weekend, eating brunch with my wife, our conversation turned, naturally, to the games we’d been playing. As I described my sojourns in Oblivion, I kept glancing over my shoulder at the people around us. Were they listening? Could they tell we were talking about games? Would they think we were nerds?

I know it doesn’t matter. I know, even if they could overhear, they wouldn’t care. Or if they did, it’d more than likely be because they’d played it, too. Or even if it wasn’t that, that they, for some reason, had it in for people who played games, even that wouldn’t matter. Not really. But still, I couldn’t bring myself to not care what they were thinking. I’ve spent so much of my life avoiding being pigeonholed as a gamer, avoiding suspicion, I no longer know how to act like one. This must be how vampires feel.

I realized then that my encounter with Bobby Kramer had been a catalyst, a defining moment, the ripples of which still echo along my personal timeline. After the bus incident I changed everything about myself; my hair, my clothes, inserted contact lenses. I even took up acting, thinking that by putting myself on stage, I could at least control how I’d be perceived. If people were going to laugh at me, I wanted to have some control over what they were laughing about. 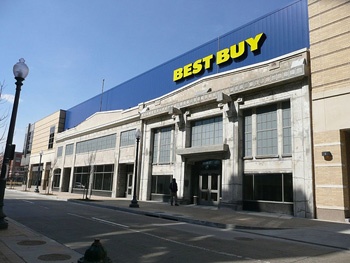 Thinking about it, I suppose, I owe Bobby more than I realize. My acting led to filmmaking which led to my current career. I wouldn’t be where I am if it weren’t for glasses-breaking Bobby. I would also, in some ways, be happier.

After brunch, my wife and I headed to Blockbuster, where things got even more intense. The sales clerk asked the dreaded question, the question I don’t even ask myself: “Are you guys gamers?” he asked. He just spat it right out there. Not “Do you play games?” but “are you gamers?” I didn’t know quite what to say. I went looking for something to hide behind.

We were there renting movies. A lot of movies. Perhaps that was what tipped him off to the fact that we didn’t get out much. I wanted to say: “Gamer? Me? No, sir. Not really. I do…dabble… a bit, but I’m not a ‘gamer’ per se…” Backpedal, backpedal. Instead, I said nothing.

Turns out the clerk was trying to turn us on to Blockbuster’s new rental policies and game pre-order services, both of which would, in fact, have been of use to us if we didn’t mainline the damn things, getting most of our games direct from the publisher. We smiled, nodded and tried to be encouraging. You don’t get that kind of service often, and the next person may appreciate it. Perfectly harmless, but I was aghast. How many times in one day must one face one’s own hidden vulnerabilities?

More than twice, apparently. It came up again at the Best Buy. I was shopping for a new controller for my Xbox 360. My hope when shopping for things of that nature is to wander into one of the larger stores where no one will really pay attention to me; just another old dude looking for game stuff. I purposefully avoid the smaller store where my wife is frequently recognized, and where I may be as well. I just don’t need the hassle.

Best Buy, I think, is safe. Think again. They have apparently begun hiring people persons at Best Buy. The guy in the game section was especially friendly. He wanted to help us find everything, so I left him and my wife to discuss the pros and cons of the PS3 remote control device while I wandered over to peruse the 360 controllers. I picked up a Halo-branded controller, just to look at it, and around the corner comes Mr. Dude.

“I can give you 30 percent off on that,” he said, and I froze. Being considered a gamer is bad enough. Being considered a Halo fanboy would be deadly to my ego. And yet, at 30 percent off, the Halo controller was well under the cost of the normal version. Dammit, he’d found my weak spot. I sheepishly handed it over and he dragged yet another person into the chain of shame to acquire the discount code. Then we marched up to the counter, where still another person was invited into my horror. This time, a young lady. 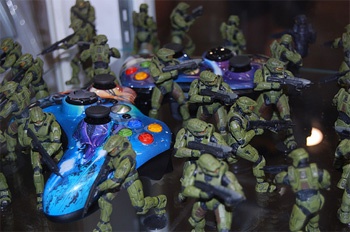 “I was thinking of getting one of these for my brother,” she said. Adding “my younger brother.” As if to drive the point home that I’m a man child who should grow the hell up. “He doesn’t like Halo, but it’s so cheap,” she finished, and I couldn’t even respond. The fact is, I actually do like Halo. My shields were depleted. I had nothing left. I gave her my money and slunk out.

I suspect I’m overreacting to all of this. I suspect the world is a less scary place these days, and that no one really cares that I’m over 30 and play games. I suspect some of you reading this may have grown up in a time when being seen playing games wasn’t the kiss of death to having a life. If so, then I’m glad. I hope you’ve never faced your own personal Bobby Kramers, or that if you did, you found a less destructive path toward dealing with him. I hope you had an easier time with being yourselves.

I’d like to say I’ve been doing my part in making the world a better place for you, but that’d be a bigger lie than the cake. I’m no Rosa Parks. Instead of standing proud and defiant at the front of the bus, I hid in the back, changed clothes and tried to pass myself as one of my oppressors. Then I wrote about it from a safe distance. It’s better, I think, to stand up for oneself. To walk into the Best Buy, head held high, and buy that Halo controller, because, damn it, it’s awesome.

Russ Pitts is a gamer. His blog can be found at www.falsegravity.com.