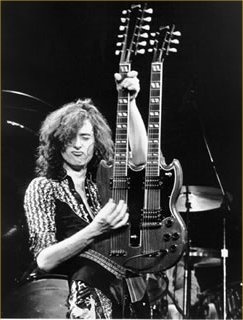 I don’t play Guitar Hero anymore. Perhaps that shouldn’t be a surprise. I was late to that party anyway.

Back in 2005,. When everybody and their granny was oohing and ahhing over the option of rocking out with the little, plastic guitar, I was chuckling mildly and sipping at scotch, wondering just what in the hell had gotten into all those people. And then I played it.

Picking up that little, plastic axe for the first time and playing through the entire game with my brother by my side was one of the coolest gaming experiences I’ve ever had. And I’d been doing this for so long I thought I’d seen and done it all. That learned me.

Within weeks I was a Guitar Hero devotee. I got my first PS2 just to play the damn game, and spent the better part of every night for a year shredding the crap out of it. It was, as everyone with a keyboard and a PS2 at the time wrote, the resurgence of the dream, the resurrection of the gamer fantasy, the revival of fun. Guitar Hero was more than just a game, it kicked ass in a way no game ever had. Other games make playing fun. Guitar Hero made life more fun.

And then the second one came out, and it was awesome. Another guitar, another year, a lot more parties where the plastic guitars came out before the booze. It isn’t often life seems as simple as plugging in a guitar and wailing away, but that year it was.

Those of you who actually play the guitar are exempt from reading and/or caring about the preceding sentence. We all know you folks have tapped into some arcane power, granting yourselves access to previously untapped levels of awesome. We know honey flows from your fingertips, chicks line up for blocks to have sex with you and the gods themselves smile upon you as their golden children, able to rock at a moment’s notice. Good for you. No, really. I think it’s great. Just look at the smile on my face. It’s genuine, I swear.

This is what Guitar Hero is about; you don’t know an A chord from a lamp cord, but with Guitar Hero, you can still rock. Vishnu bless videogames.

Something happened late last year though, to me anyway; I stopped caring. Rock Band came along, with the promise of re-invigorating the genre (I wasn’t aware it needed it) and opening up a couple of new positions in the band in the process. Guitar heroes, it would seem, were so last year. Now you could be a drum hero. No, really.

Let’s talk about drummers for a second. I’ve never played in a band, but I’ve served as a kind of informal roadie for several. There was a time when practically everyone I knew was in a band. Friends, roommates, girlfriends, etc. Everybody played – except me. I was always hanging around, walking into clubs with the band, carrying something or another just to get already cheap beer at “band prices” and feeling like I was just that much cooler than the guys who didn’t know the band. 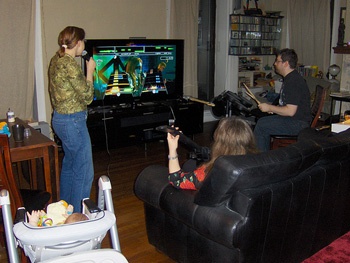 One night, after carrying a friend’s amp into a club for and following him to the bar pretending not to care that people were looking at me, my friend told me a joke.

“What do you call the guy who can’t play an instrument but hangs out with the band anyway?” he asked.

I felt the color drain from my face. I’d been expecting this moment. The band was getting better, attracting notice and playing bigger clubs. I was sure the answer to this question was “me.” I was getting canned from the band I wasn’t even in.

“I … don’t know,” I said. Stalling. Hoping the beers would come before I had to go sit with the normal folks.

My friend leaned in close enough I could smell his lack of aftershave. “The drummer.”

He laughed, patted me on the back, handed me a beer and walked on stage to pick up his guitar and commence being the coolest guy in the room for half an hour. See, even the drummer, my friend the guitar god was telling me, is less cool than the guy who carries the amp. There’s a life lesson in that.

Every drummer I’ve ever known – and I’ve known many – has been trouble. If it’s not drugs, it’s the lack of a job or a car. How drummers get by without cars is beyond me, but many do. I’ve seen dudes carrying guitars and amplifiers on a bicycle before, but drum kits require vehicles with no fewer than four wheels, and if it’s got a hatchback or a tailgate, even better.

Here’s another joke: What do you call a drummer without a girlfriend? Homeless. It’s funny because it’s true. What’s funnier is I heard this one from a drummer.

So when I heard they were making a game where you could play as the drummer, I nearly spit up my coffee. I was wondering if the game would kick me out of my apartment, hook me on heroin and make me lose my job. No? Then it’s not quite the real thing, is it?

Granted, Guitar Hero won’t instantly transport you to a magical land where women throw their undergarments at your feet and vocalists will accuse you of stealing their band away, but of all the times I’ve dreamt of being a rock and roll star, I’ve never once imagined myself behind the drum kit. Drums are what you play when you can’t play the guitar. Everyone knows this. Even the drummer.

The problem may be, when you’ve made the perfect rock fantasy game, where else can you go with it except to add more songs? I imagine the creative geniuses who made Guitar Hero in the first place had this very conversation with themselves after they caught a vision of their futures in a mirror and decided they didn’t want to trot off into old age with a list of credits all the same sans the number following the title. 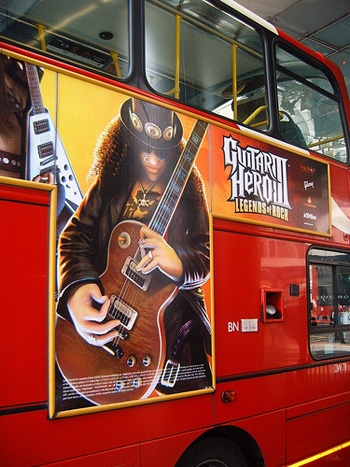 So they abandoned their baby and created Rock Band instead, where you can play as the whole band if you want, and if you have more than two people over for drinks and rock fantasies, that’s exactly what you’ll do. Whether you want to or not. Because you don’t spend $170 on a drum kit and not make somebody use it.

Same with the microphone, although god help me if I can think of anyone at the Guitar Hero parties I went to who could carry a tune well enough not to make a complete fool out of themselves. They’ll do it, but they won’t like it, then they’ll make you do it, too. By the end of the evening, everyone will have taken a turn, and will slink home feeling slightly ashamed and a little confused. As if they feel like they should have enjoyed themselves, but for some reason didn’t. Like paying for sex in a foreign country. I call this Karaoke Revolution syndrome.

I understand the theory is people will get together and have the experience of making music together and feel the way real musicians feel when they are actually in a band and actually making music. Don’t get me wrong, I totally get the theory. I just think it’s bullshit. People playing these games don’t feel like they’re actually making music because they aren’t. They’re playing a game, and the emotional response they get is as from playing a game. Period. Playing music is hard. It takes work. Which is why, when it all comes together, every member of the band is clicking together and the notes just feel right, it seems so magical. There’s nothing magical about punching a plastic button in time with a metronomic display on a television screen. At best, it’s merely awesome. Even on the plastic drum kit.

I heard someone in the office recently say about Rock Band, “Man, this isn’t like sitting around in your living room playing on a plastic instrument and pretending to play the guitar. This is real.” Yeah, man. Listen, I’ve slapped my thighs in tune to the music sitting in the car at red lights. I’ve banged my table like it was a snare drum. I’ve tapped an actual drum stick to the rubber surface of a plastic drum kit. Hell, I’ve even tried my hand at the drums. But no matter how much Rock Band I play, I’m not a drummer. I’ll never be the drummer. I’m just the guy who hangs out with the band.

Guitar Hero III, the latest edition of the franchise that started it all, isn’t much better. Used to be you just picked up your guitar and played a song. Now, with the challenge modes and the tricks and powerups there’s strategy involved. It’s like playing Cowboys and Indians with the kid who insists on making up rules. “Indians can’t go past Billy’s yard or they’re dead. Cowboys have to start blindfolded.” Screw that. It’s Cowboys and Indians, man. You run around and shoot each other. Done.

I suppose I felt the same way the first time I played a deathmatch with specialized rules. In fact, I know I did. It’s like when the guys on the Halo or whatever server are like “OK, now this isn’t in the rules, so you have to remember to …” and that’s whenh I check out.. I don’t log on to remember some kid’s made-up rules. I log on to kill. Guitar Hero III makes me feel the same way. I don’t pick up my plastic axe to play Deliverance banjo showdown with Tom Morello. I’m there to play.

I suppose I could go back to the old classics. Guitar Hero II is still a fine game, as is the original, and the new guitar controllers are fantastic. But the last time I played, something was gone. It just wasn’t the same. I was overly conscious that I was just pressing buttons to the beat. I was better at it, but it wasn’t as much fun. I didn’t feel like a rock star anymore. I didn’t even feel like the guy hanging out with the band. I just felt like a 30-something year old douchebag with a living room full of plastic guitars. Maybe it’s just me.

Russ Pitts grew up wanting to be a mechanic. True story. His blog can be found at www.falsegravity.com