While films such as James Cameron’s Avatar and Star Wars Episode II: Attack of the Clones depict spaceships powered by solar sails by emphasizing special effects over scientific accuracy, one of NASA’s upcoming missions is planning to tell a big-screen story with a real-life solar sail.

NASA’s Flashlight mission will map the distribution of water ice in the permanently-shadowed regions of the Moon’s south pole – with the intent of determining whether the water can be used as propellant and a source of oxygen for future human explorers and inhabitants.

Water on the Moon?

In 2009, data from Chandrayaan-1, India’s first lunar probe, showed that water exists widespread on the lunar surface, backed up by measurements taken by the Cassini unmanned spacecraft on its way to Saturn and Deep Impact on its way to comet Tempel 1. Later that year, the LCROSS mission intentionally crashed its rocket stage into the Moon’s Cabeus crater, and the resulting plume of material contained water. These missions focused on answering the larger question – is there water? – while Flashlight will concentrate on mapping more exact locations of water, information key to selecting sites for future rover and lander missions. 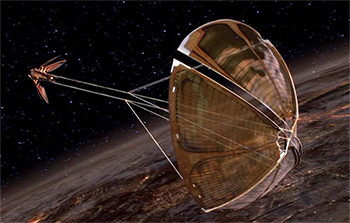 NASA’s Flashlight mission pairs a solar sail with a CubeSat – a type of miniaturized research satellite – in a number of technological firsts for the agency, including first CubeSat to the Moon. Depicted in the banner image above, the Flashlight’s solar sail will be a shiny 85 square meters, propelling the satellite from its launch trajectory to low lunar orbit as well as changing orbits in support of the science mission.

The basic principle behind a solar sail is that propulsion results from momentum transferred to the satellite by reflecting solar photons off the sail. Les Johnson, of the Advanced Concepts Office at Marshall Space Flight Center, points out that the reflective nature of Flashlight’s solar sail is what puts it ahead of Count Dooku’s darker solar sailer seen in Star Wars Episode II: Flashlight’s bright sail produces more thrust than Dooku’s dark one because reflection produces more thrust than absorption. (Just another reason not to join the Dark Side.)

In addition to propelling the CubeSat, the solar sail plays a large role in Flashlight’s scientific mission: it provides the photons for the spectroscopic investigation of the southern lunar surface. Spectroscopy is a technique that reflects light off a material and uses information about the reflected wavelengths to determine the composition of the material. Unable to use sunlight to probe the permanently-shadowed regions of the Moon’s south pole, NASA scientists are cleverly sending the photons collected by the solar sail – in a burst of approximately 50 kilowatts – into those regions. The spectrograph onboard the CubeSat will measure the reflectance from the dark craters and categorize them into one of four types: dry regolith (loose surface rock and dust), methane ice, carbon dioxide ice, or water ice. 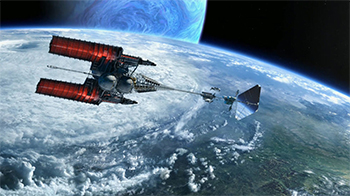 Those may sound like broad categories, making a low-resolution map of the southern lunar surface with just four colors, but this information will play a key role in determining landing – and perhaps habitation – sites for future Moon missions. Without the high-powered lasers that the Venture Star spacecraft from Avatar used to accelerate, NASA’s Flashlight will travel approximately a year from launch to lunar orbit and begin sending data to Earth in approximately 2019. That’s a long time to wait for a drink but will ensure future astronauts know where to go when they’re parched.