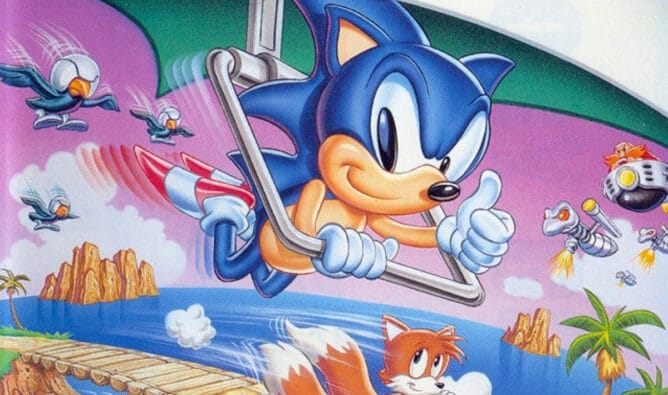 Remember Sonic the Hedgehog for the Sega Master System? Sonic Chaos? Sonic Triple Trouble on the Game Gear? Don’t worry, you’re not alone because, with Sonic Origins, Sega has chosen to overlook the existence of every single 8-bit Sonic the Hedgehog game, and it’s an absolute crime.

In fact, for quite a while Sega has been treating the Master System and Game Gear versions of Sonic the Hedgehog like some embarrassing uncle, forced to sit on the wobbly chair in the spot nearest the toilet. Sonic’s 8-bit incarnations have been included as unlockables in the odd compilation and pushed out onto Nintendo’s Virtual Console, but there’s rarely been any kind of fanfare.

“But hang on,” you might be thinking, “why would a Sonic compilation need a bunch of ports thrown in?” After all, the Sega Game Gear release of Streets of Rage 2 is technically impressive, but it’s still an inferior copy of the Mega Drive / Genesis version. But here’s the rub – the 8-bit Sonic the Hedgehog games aren’t ports or even approximate copies. They’re entirely new games.

If you’ve never played the 8-bit Master System / Game Gear Sonic games, you’ve missed out on several entirely distinct Sonic outings. Admittedly, I’m a little biased; the Master System version of Sonic the Hedgehog was my Sonic the Hedgehog. (It wasn’t until later that I got my hands on a Mega Drive.) Even now, diving back into it is a joy, even though it’s missing the 16-bit version’s loops. 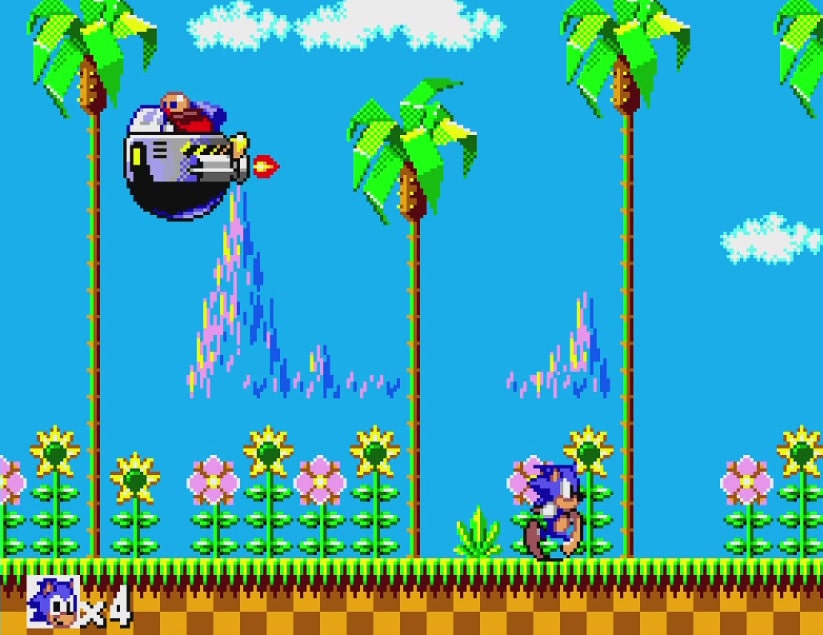 I remember putting the cartridge in when I was much, much younger, hitting the button, and grinning as I was greeted by a chiptune version of Sonic’s theme. Having tried the Mega Drive version in a shop somewhere, I knew what I was getting was different, but it was still Sonic, right? I don’t think my young mind truly understood that there were some terrible, terrible ports out there, but in this case, Sega delivered.

Actually, that’s not entirely true. Yes, Sega was the publisher and it was Sega’s console, but the company responsible was Ancient, founded by Streets of Rage 2 composer Yuzo Koshiro. Ancient still exists today; Sonic was its first title, and had it bombed, it could have been the company’s only release.

The developer went all out, and despite the limitations of the hardware, the Master System version of Sonic the Hedgehog had a ridiculous amount of rings, cool bosses, and a real sensation of speed. But above all, it was an entirely different game from the 16-bit Sonic, with levels like Bridge Zone, Jungle Zone, and Sky Base Zone, each including their own unique hazards.

So when I was able to talk my parents into getting me a Mega Drive, (I still regret later convincing them to buy a Mega CD.) I got to play an entirely new Sonic the Hedgehog. And when Sonic the Hedgehog 2 came around, Mega Drive players got to face Emerald Hill Zone’s Drill machine, while Master System players were tricking Doctor Robotnik into destroying a mechanical antlion. 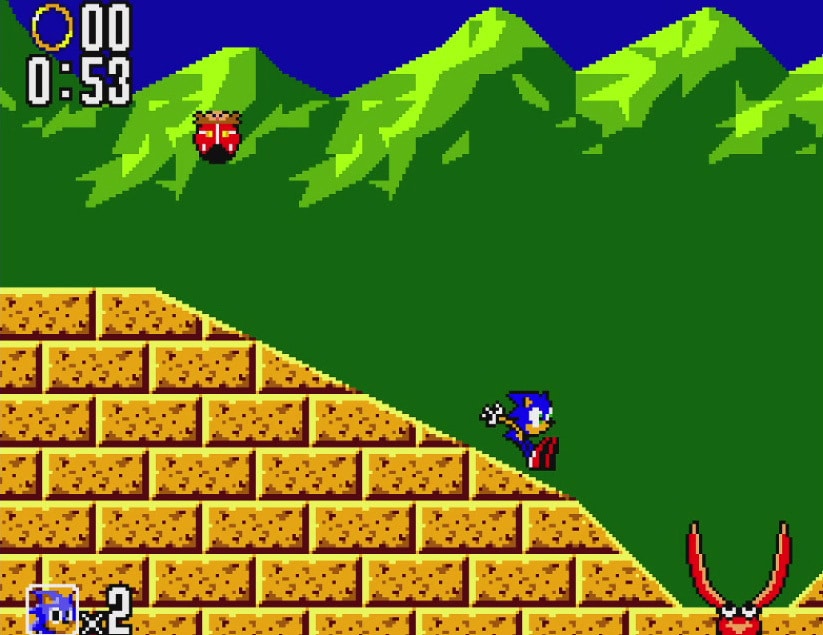 The “main” 8-bit Sonic games that followed the original — Sonic the Hedgehog 2, Sonic Chaos, and Sonic Triple Trouble — were handled by Aspect, who continued to squeeze every last drop from the 8-bit Master System and Game Gear (though 1994’s Triple Trouble bypassed the waning Master System entirely). Sonic the Hedgehog 2 incorporated the much-loved loop-the-loops, and later titles added more mechanics from the Genesis / Mega Drive games.

However, as one of the series’s biggest surprises, the 8-bit titles innovated in ways that their 16-bit cousins didn’t. This may have been because the grander 16-bit sequences, such as Sonic 2’s Death Egg Robot battle, were beyond the 8-bit platforms’ reach. That doesn’t diminish the 8-bit versions’ importance though.

For example, 8-bit Sonic the Hedgehog was the first game to hide the Chaos Emeralds around each level, instead of making them the reward for completing a special stage; it wasn’t until Sonic the Hedgehog 3 that the Genesis / Mega Drive series started hiding these stages. The 8-bit Sonic the Hedgehog 2 also introduced mine carts and hang gliders, though the gliders weren’t the easiest to control. And some of the music — which was mostly original — made its way into later Sonic titles.

The 8-bit Sonic the Hedgehog was the game that made me stick with Sega, instead of trading my Master System in for an NES. And when I had the opportunity to upgrade (though I still kept my Master System), I chose the platform that would give me more of the blue streak’s adventures. 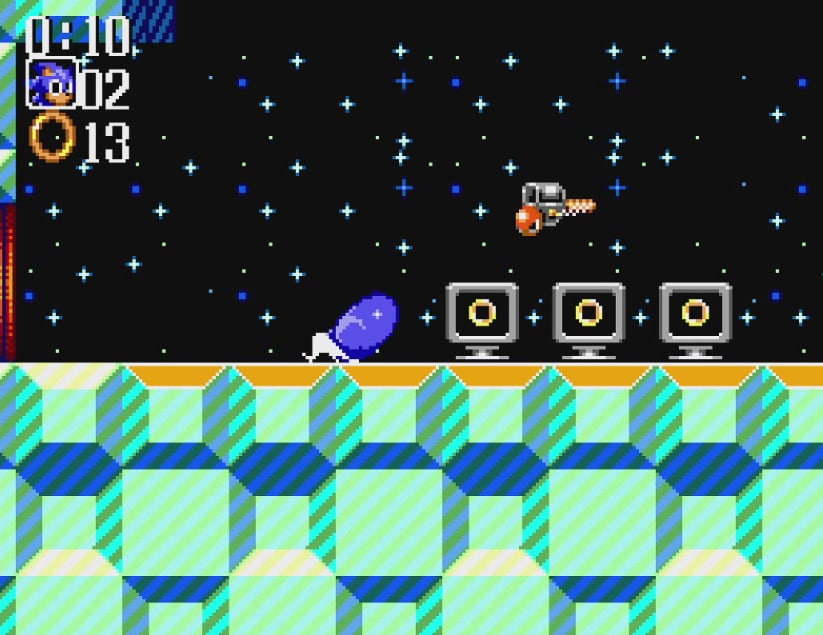 Ancient or Aspect could have taken the easy(ish) route and all but copied the original Mega Drive games, dialed down to something the Master System and Game Gear could handle. Instead, they delivered four entirely different and entirely entertaining Sonic the Hedgehog games that deserve to be spoken of in the same breath as the Genesis / Mega Drive titles.

You can get your hands on fan-created remakes of the first two 8-bit Sonic the Hedgehog games, and it’s possible that they’ll be squirreled away in Sonic Origins, unlockable via some arbitrary means. But they deserve to be thrust in the limelight, not thrown in as an afterthought.

Given that Sega claims to be celebrating Sonic’s 30th anniversary, it’s about time they give Sonic the Hedgehog’s 8-bit incarnations the recognition they sorely deserve. And if you’re a Sonic fan who’s only now learning of their existence, take them for a spin — you’ll be surprised what you’ve missed out on.