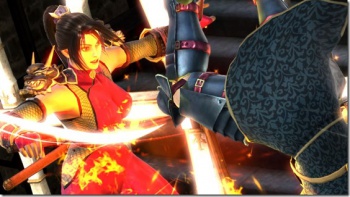 Soul Calibur: Lost Swords is a Soul Calibur game recently released for the PS3 that is singleplayer only. Of all of the genres in the gaming sphere, fighting games are usually the one in which some form of multiplayer is basically a given, so many fans were scratching their heads over this move. Masaaki Hoshino, the game’s producer explains that while a multiplayer mode was originally planned, it was cut “because we’re going with a pay-to-win model.”

“The reason that we went singleplayer…well, originally, we were thinking about having a multiplayer option, but because we’re going with a pay-to-win model, we were worried that by having online multiplayer, for all the new users that would be coming in experiencing the game for the first time, they might be immediately deterred by fighting against opponents who had superior equipment and gear-and we didn’t want to have that kind of negative impact on new players.”

Hoshino does stress that while he felt the game’s micro-transactions would affect multiplayer, “In the singleplayer experience, having a pay-to-win structure won’t impede the player’s experience with the game.”

Hoshino went on to talk about the game’s character roster. As of right now, there are but three character available to new players (Sophitia, Siegfried, and Mitsurugi), but he said that the company was planning to make new characters available through limited time events.

As for those of you expecting a secret guest character, a la Link in Soul Calibur II or Yoda and Darth Vader in Soul Calibur IV, Hoshino says “I would love to see something like that happen, but currently it’s still undetermined.”

As someone who was once told to not write stories using the phrase “pay-to-win” because it’s inflammatory, I’m just perplexed at how nonchalant Namco Bandai is being about the whole thing.

Wolfenstein: The New Order Review – I Know What I Reich