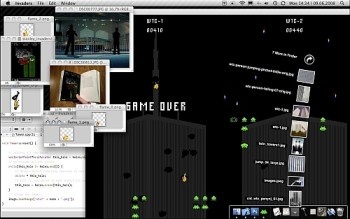 Space Invaders are bombing the Twin Towers of the World Trade Center, and while the passage of time may have taken the edge off such a display it doesn’t explain who thought this would be a good idea.

The Invaders! art exhibit at the Leipzig Game Convention features a large display of the 1978 arcade classic, except this time the orderly little invaders from space are bombing the Twin Towers, knocking holes in its walls and starting fires and apparently causing 8-bit figures to jump from the burning structures. The game was projected on a massive screen near other Space Invaders bits and pieces, on display as part of the game’s 30th anniversary.

The display is based on a work created by Douglas Edric Stanley in September 2001, but this time on a much larger scale, with support for more advanced options as well as a “stronger tie-in to the historical narrative that originally inspired me to make this version in the first place,” he said on his website. Stanley said he was invited by Andreas Lange of the Computer Spiele Museum to include his “somewhat ambiguous juxtaposition of this mythical game and the historical events of September 11th” as part of Space Invaders‘ 30th anniversary celebration.

A press release on Stanley’s site says, “The World Trade Center attacks mark a deep cut in our recent history that is still being processed. The French-American artist Douglas Edric Stanley has found an unusual – though obvious – metaphor with his work Invaders!, which is based on the 1978 arcade original. In his interactive large installation, the players must prevent the catastrophe by controlling the well- known cannon at the lower screen border with their bodies and firing it using arm movements. Like the original, this trial is ultimately unsuccessful, thus creating an articulated and critical commentary about the current war strategy. In this regard, Douglas Edric Stanley sees Space Invaders as ‘a social tale that can be related to historical tales without losing its poetic power.'”

The whole thing comes across as a little tasteless, but apparently that’s the point of art these days. More information about Invaders!, including a video and a Mac OS X version of the game (and a link for Windows users to complain about not having a version of their own) can be found at Stanley’s site, abstractmachine.net.