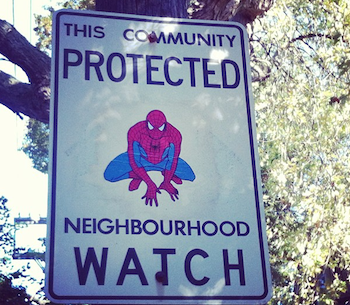 A local artist is altering Toronto’s street signs with comic and TV characters.

In comic books, there’s usually a hero to save the day. One notable exception was Batman’s replacement in the 90’s, who once let some holiday shoppers get mugged so they’d learn that the world is a dangerous place (Movie Bob’s right, the 90’s sucked). In the real world, we either have to rely on the police or your local neighborhood watch program. Over the last few years, a Toronto artist has been blurring the lines between fantasy and reality by modifying the neighborhood watch signs around the city to include various pop culture heroes.

Instead of the traditional neighborhood watch logo, the artist, known only by the pseudonym Andrew Lamb, adds the comforting image of everyone from Spider-Man and the Fantastic Four to Mister Rogers. He’s delved pretty deep into popular culture as well, pulling up everyone from Bruce Willis to the Care Bears. Lamb’s been up to this for years now, and you can see every sign he’s done on his Instagram page.

Janet Sherbanowski, the executive director of the organization that runs the Neighborhood Watch programs, is actually ok with Lamb’s work. “Anything that brings notice to our signs and our work is good,” she told the National Post. While the authorities seem to be chill with the clever vandalism, Lamb’s keeping his true identity under wraps just in case.