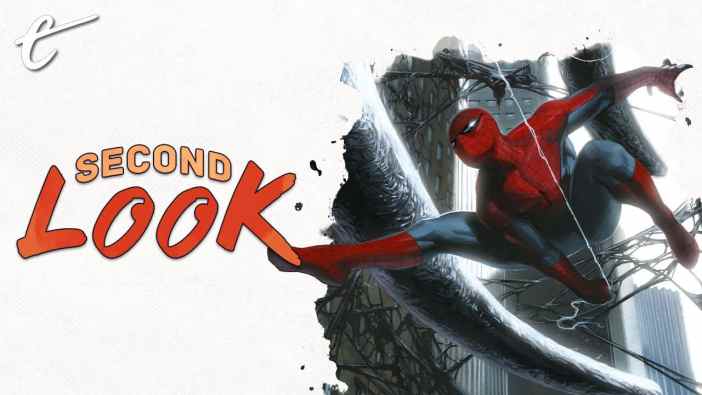 It’s strange to think it’s been over a decade since Treyarch’s landmark hit Spider-Man 2, a sequel to an already amazing tie-in game to the famous Sam Raimi Spider-Man trilogy. While the game’s successor, Spider-Man 3, left much to be desired, the absence of a fourth movie left Treyarch with a unique prospect: It could make an original Spider-Man game, wholly of its own invention. The result was oddly prophetic of the studio’s future work. A game all about choice. Hordes of infected. A sandbox of destruction. Spider-Man: Web of Shadows is the granddaddy of Call of Duty zombies modes and so much more.

I’ve been fairly vocal about my disappointment with Insomniac’s first crack at Spider-Man, and Web of Shadows is a perfect example of how much more can be done with Marvel’s webhead. Set amid a symbiote plague that’s infected most of Manhattan, it’s up to you to decide if Peter Parker can rise above it all or become as corrupted as his beloved city. Not to be outdone, Web of Shadows embraces not simply player choice, but consequence. You don’t just choose to be a hero or villain — you have to act like it. Throwing cars with pedestrians inside isn’t gonna win you points with the cops or S.H.I.E.L.D., while being a softie will lose any respect you might’ve earned by being a cold pragmatist at story branches.

While yes, neither the writing nor the acting will win any awards, the earnest messiness with which it commits is remarkable. This isn’t a game marketing to anyone, but a comic book game for comic book fans. Luke Cage and Moon Knight are major characters, and this was years before any mainstream audience would recognize either of them. The entire plot revolves around Venom’s symbiote going viral and infecting all of New York in a remarkably grim storyline that evokes the Marvel Zombies series. There are deep-cut references to Spider-Man and Wolverine’s team-ups. There are billboards advertising Damage Control. It’s a delightful well of fan service that serves a purpose.

Every character and choice flows together across an ongoing story. Echoing the design philosophy of the Mafia games, the open-world sandbox is a character that evolves alongside Spider-Man. At first you’re dealing with typical Spider-Man stuff, helping Luke Cage contain a brewing gang war while tracking down Venom lurking in the shadows. With a new symbiote suit of his own, Spider-Man has that much more power and responsibility. Then you’re either teaming up with Black Cat or Moon Knight to take on Fisk, who was behind the whole gang war and has a hidden agenda.

At the same time, Wolverine’s questioning if you have your head on straight as he and you start tracking a strange viral outbreak turning citizens crazy. Before too long, what started as a typical Spider-Man sandbox game turns into borderline action-horror as Venom’s hordes coat the city in sickly, inky webs. Your objectives change from heroism to survival, guiding airstrikes, coordinating refugee efforts, and contemplating recruiting supervillains in a desperate bid to save the world.

Iconic characters can die or face even worse fates if you choose poorly. Civilian NPCs can die if you aren’t the fastest webslinger possible. You can even damage friendly units in certain missions. If you throw a goon off the side of a building, they actually hit the ground and go splat. This is probably the freest, most unrelentingly honest Spider-Man game ever released. You’d never see something like this in the Disney era. By granting the option to be evil, failure isn’t a game over nearly as often — typically, it just means you have that much more to make up for, if you’re even trying to be a hero. 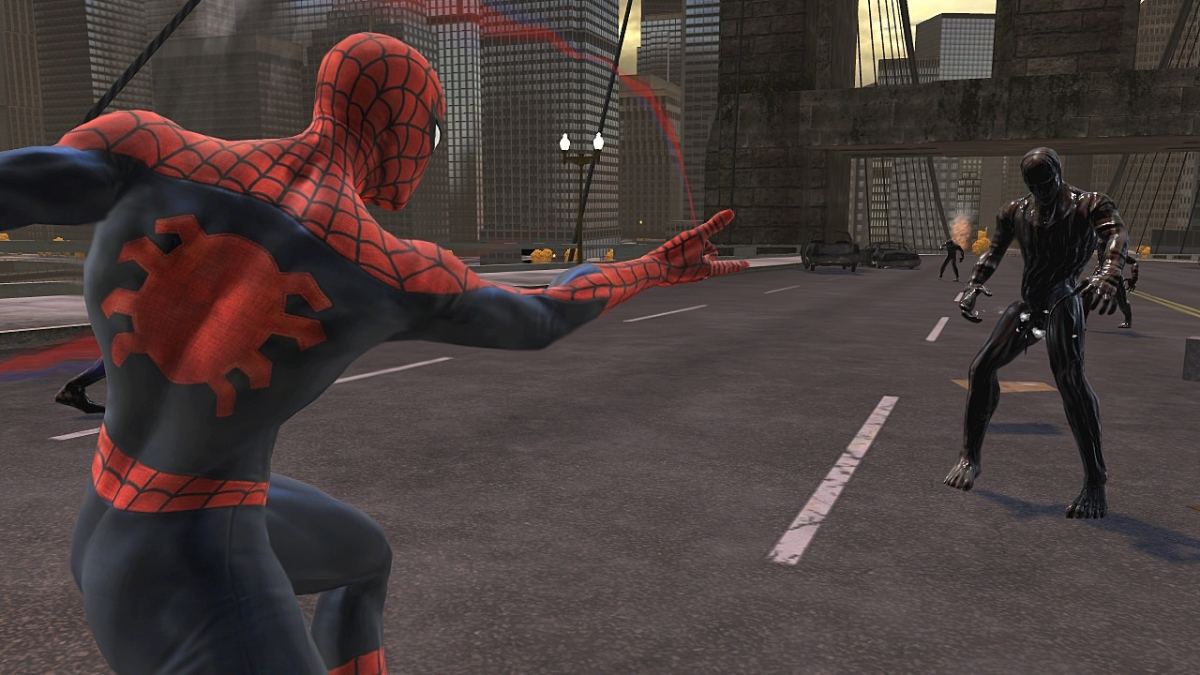 Though Spider-Man: Web of Shadows goes to extreme lengths to make some evil choices be evil, several are honestly pretty pragmatic. It’s a shame the narrative’s morality isn’t half as complex as the gameplay execution, because it has the right idea. Having an affair with Black Cat behind Mary Jane’s back is definitely a dick move, but nowhere near as evil as throwing an opponent into a jet turbine. When you first confront Wolverine, prioritizing fighting him over fending off the infected visibly raises his doubts with a trust meter. He knows the real Spider-Man wouldn’t fight a friend unless absolutely necessary. For a Spider-Man game from the early 2000s, this is remarkably ambitious narrative design — a boldness shared on every front.

I miss open-world sandboxes like Web of Shadows. The environment isn’t a checklist but an organic world full of dynamically spawned mini-missions. Most of your objectives simply encourage players to dig into the world and engage in its fully 3D combat, including the only example of wall-crawling combat on the side of buildings. The sheer glut of enemy types and unique encounters provide the sort of natural storytelling of the early Grand Theft Auto games.

However, for the many upsides to this design approach, there are several downsides. First and foremost, the quality-of-life issues in Spider-Man: Web of Shadows can verge on absurd. You can tell this was a production struggling to meet its release date. Though never often enough to hinder your enjoyment, frame rate drops, animation hitches, and physics mishaps occur with worrying frequency. It says something that the Wii version actually runs better than the Xbox 360, PlayStation 3, and PC ports, though at a cost of vastly lower visual quality and NPC spawns, outside of prerendered cutscenes. I’m not sure there’s a version of this game without massive amounts of visual pop-in, and you should also be warned that it’s a wildly different product on PlayStation 2 and handhelds. 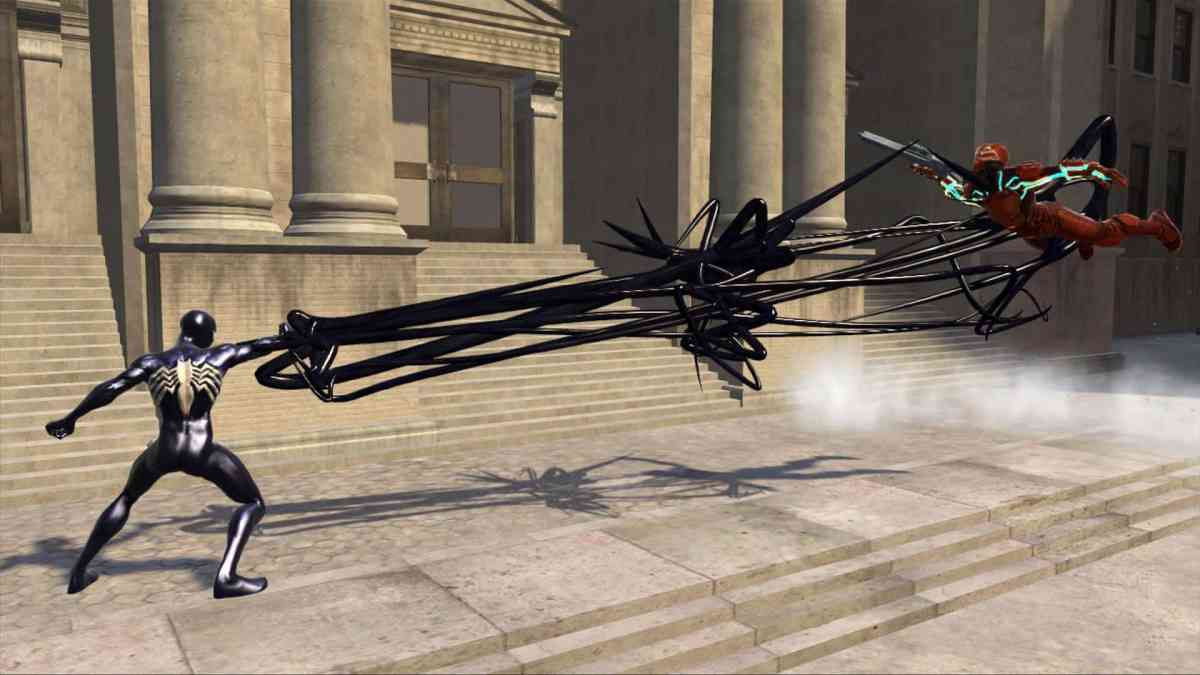 Additionally not helping matters is the game’s dogged insistence on incorporating overly exaggerated physics — a stationary symbiote nest’s primary attack can send you flying so far off a skyscraper. As a result, it’s very easy to be stun-locked from certain actions by a few enemy types, though the game’s summonable ally system helps in this regard, to the point it’s basically a necessity. Thankfully, allies are available constantly in the overworld and almost every major mission, and they are honestly pretty fun to bring into the game. While Spider-Man’s voice actor varies in quality constantly, the cast of allies is solid, particularly Wolverine and Black Cat, who are fortunately the best backup to call upon in most situations.

Finally, and most significantly, there is inherent gameplay repetition from there being so few heavily scripted missions. Set pieces are rare and often harness the city, like a big chase sequence or a boss battle that transforms a familiar area. Some missions use this to surprisingly great effect, but in other cases, you’re literally just beating up X amount of enemies or saving Y amount of civilians to fulfill an arbitrary quota. Many of these quotas aren’t mandatory but offer massive experience boosts worth several upgrades. While your core move set is typically enough to get you through, you will benefit tremendously from expanding both of your suits’ arsenals.

Admirably, both suits are available to you at the same time, swapping at the press of a button, and they do feel incredibly distinct. Your standard red and blue threads emphasize air combos and area-of-effect attacks for crowd control, while the symbiote suit is all about Arkham-style careful button presses, power attacks, and grappling foes with a web-whip. They manage to come up with an impressive amount of moves within these two ability sets, so you can still have plenty of fun, but it relies on you meeting the game halfway.

The same approach is taken with health and power meter upgrades, with you tracking down spider emblems like orbs in Crackdown. Hunting the orbs can be incredibly addictive fun in and of itself, doubling as a way to learn the environment as you retread familiar neighborhoods before and after the symbiotes take over. The only thing that can make this tedious is the game’s hyperactive camera that desperately could have used a sensitivity setting. You get used to it, but it can be a bit much at first.

However, I’m grateful for Spider-Man: Web of Shadows existing, warts and all. The same design philosophy here has been polished to a mirror sheen in Call of Duty: Black Ops: Cold War’s Outbreak mode. Branching narrative has also since been explored in both Cold War and Black Ops 2, iterating on the same ideas with a fresh perspective. It’s surreal seeing the roots of such recent gaming highlights stretching all the way back to a Spider-Man game of all things.

Taken on its own merits, Spider-Man: Web of Shadows is an amazingly fun time — never quite spectacular or the ultimate Spider-Man game, but more than good in its own right. It’s sloppy and clearly would have benefited from more time before release, which you can realistically say about any Activision tie-in game. The fact Treyarch made such a reactive, organic sandbox of heroism and villainy years before Infamous or Prototype is incredible. Experiencing a superhero game with this little hand-holding or blatant corporate oversight is practically unheard of in this console generation. If you miss when sandbox games were, you know, a sandbox instead of just being Assassin’s Creed with superheroes, then find a copy of Web of Shadows. It’s a mess, but goodness is it a delightful mess.