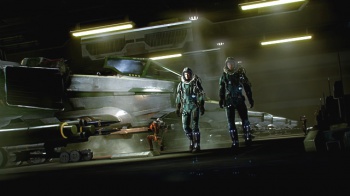 When someone mentions the upcoming Star Citizen, you’re probably thinking one of two things: Either you hope that it remains true to the spirit of classic space simulators, or you’re amazed at how much money it’s making. The project is already the most successful crowdfunding effort of all time, with individual ships that cost Chris Roberts tens of thousands of dollars to design. What’s really interesting however is that Star Citizen‘s fundraising efforts aren’t slowing down; in fact, they seem to be speeding up. Barely a month after reaching the $10 million mark, Star Citizen has raised yet another $5 million from enthusiastic donors, unlocking a new ship and additional stretch goals in the process.

Reaching the $15 million mark added an escort carrier to Star Citizen‘s list of incredibly expensive spaceships. If that wasn’t enough, all backers will receive a digital 42-page Upgrade Handbook that outlines how to customize and overclock your ship’s systems. And $15 million isn’t even the highest stretch goal. If Star Citizen earns another million, Roberts will give in-game laser pistols to every donor, and include a galaxy-wide arena mode for competitive dogfighting tournaments.

On top of those announcements, Roberts also unveiled Star Citizen‘s $17 million stretch goals. If donors continue to donate in such high volumes, then ship upgrades will be added to all existing engine modifier pledges, while the impressive-sounding Battlecruiser class will be included in the finished game. Considering that Star Citizen currently raises an average of $36,249 per day, it’s very possible that figure will be achieved within a month or two.