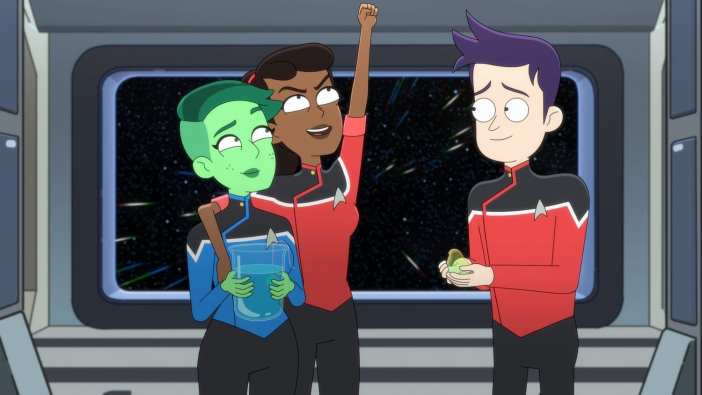 One of the more interesting aspects of Lower Decks is the extent to which the show approaches Star Trek as a workplace franchise — essentially a fictional universe populated by highly competent individuals who are very good at their very interesting jobs.

This is hardly a novel approach. The Next Generation, the show to which Lower Decks is most obviously indebted, is perhaps best understood as a television show about a bunch of people who happen to work together on a starship. Certainly, the spirit of The Next Generation arguably lives on in its purest form in Mike Schur’s modern workplace sitcoms like Brooklyn Nine-Nine or Parks and Recreation. It makes sense for Lower Decks to lean into this.

Many of Lower Deck’s best episodes work as metaphors about navigating the modern workplace. The show’s third episode, “Temporal Edict,” was about the importance of “buffer time” — of the futility of expecting staff to operate at maximum efficiency for the duration of their working time. It was a timely episode, overlapping with real-world conversations about the horrors of efficiency targets at companies like Amazon and the productivity monitoring of employees working from home.

While other contemporary Star Trek shows like Picard have attempted to grapple with issues like immigration, and while Strange New Worlds has almost aggressively avoided finding anything meaningful to say about the modern world, Lower Decks remains consistently preoccupied with the future of work. This tracks — at its core, Lower Decks is a story that is fundamentally about the below-the-line workers in a utopian future.

It is perhaps possible to position Lower Decks as part of a broader cultural trend. It seems like the workplace has been subject to renewed focus and interest. The Office was reportedly the most streamed television show of 2020, by far. This year, Severance became one of Apple TV+’s breakout shows for its darkly satirical take on office life. Lower Decks is obviously a much gentler take on the idea of the workplace, but it still resonates as part of a larger conversation on the subject. 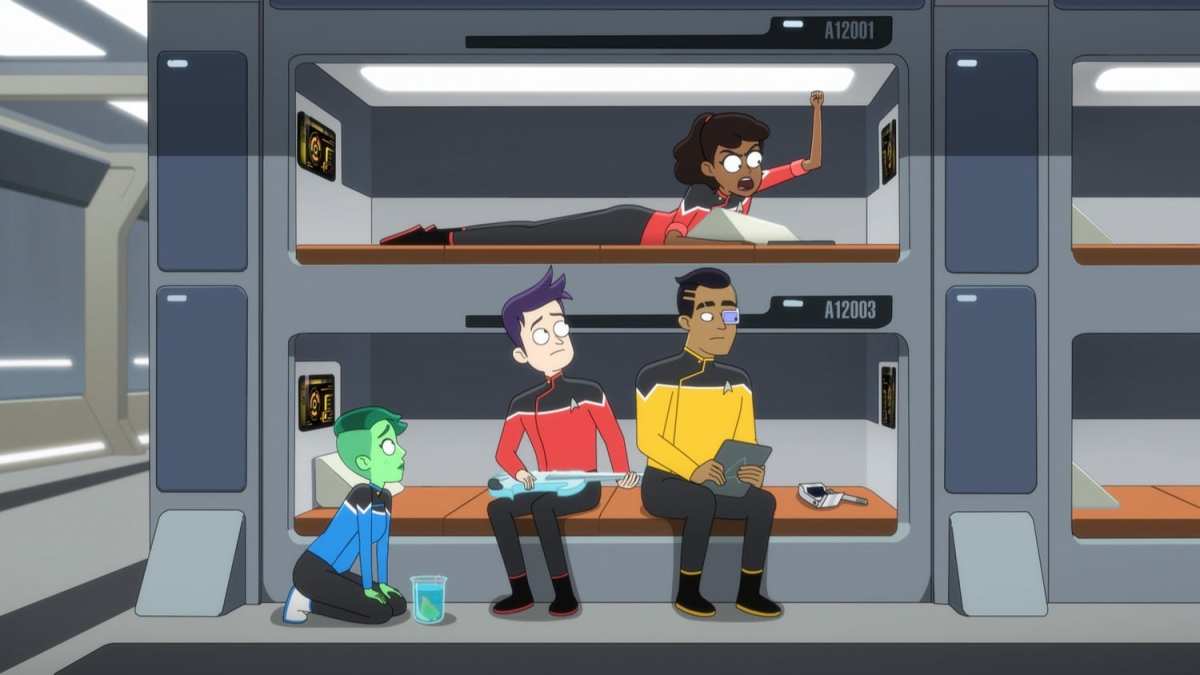 This understanding also provides a lens on the show’s blind spots and missteps. Like so much modern Star Trek, Lower Decks can often feel blindly beholden to authority, such as with subplots focusing on Captain Freeman’s (Dawnn Lewis) trial in “Grounded” and Commander Ransom’s (Jerry O’Connell) management style in “The Least Dangerous Game.” In these instances, the show loses sight of a fundamental principle of these workplace stories: Senior management is rarely a friend.

“Room for Growth” is built around the basic questions of work and identity that percolate through Lower Decks. What does it actually mean to be a staff member on a ship in the Star Trek universe? What is it like to have to live and work around the sort of chaotic phenomena that are just part of the job description for Starfleet officers? How does one strike a balance between work and pleasure, when one’s entire life is tied up in a particular profession?

“Room for Growth” splits its attention between two subplots that run in parallel. In true Lower Decks style, both of these plots arise in the aftermath of what would essentially be a standard 40-minute episode of The Next Generation or Voyager. Indeed, it is a very specific episode of The Next Generation, as the Cerritos seemingly discovers a D’Arsay archive similar to the one that affected the Enterprise in “Masks,” one of the most absurd (and underrated) episodes in the show’s run.

Like the riff on “Genesis” back in “Second Contact,” the charm rests in the idea that “an ancient mask situation” where Captain Freeman is “possessed by a haunted mask” is another day at the office for a Star Trek crew. “This is like the third time it’s happened,” Mariner (Tawny Newsome) complains. “Stop touching masks!” The entire crisis unfolds and is resolved in the episode’s teaser, with Freeman’s opening log lamenting that this sort of thing occurs so frequently that Starfleet needs new policies for dealing with these events. Star Trek shows like The Next Generation and Voyager would frequently be criticized for hitting “the reset button,” where the ship and the crew would endure something spectacular and horrific, only for the next episode to pick up as if nothing had happened. For example, there is no mention of the terraforming that the D’Arsay archive did to the Enterprise in “Eye of the Beholder,” the episode after “Masks.” In contrast, “Room for Growth” is all about the aftermath of such an incident.

“Room for Growth” finds Chief Engineer Billups (Paul Scheer) working his crew to exhaustion trying to essentially reconvert the Cerritos back into a starship. Freeman decides that they need rest and relaxation. It also provides the primary cast with the incentive to enter a raffle for private accommodation on the upper levels of the ship, where they would be less exposed to a rampaging alien deity possessing the body of the ship’s commanding officer.

One of the more interesting tensions within Lower Decks is the way in which the show balances a wry sense of humor with a surprising wholesomeness. The philosophical outlook of Lower Decks is not so different from that of The Next Generation, imagining a future in which people are basically decent to one another. When Billups breaks down, it’s the usually gruff Shaxs (Fred Tatasciore) who comforts and reassures him, “You can admit when you need a break. It’s not a sign of weakness.”

Indeed, with its emphasis on the emotional wellbeing of the crew as something that deserves and merits attention, Lower Decks is very much an extension of The Next Generation. That show placed Counselor Deanna Troi (Marina Sirtis) on the bridge, with a chair right next to Captain Jean-Luc Picard (Patrick Stewart) and Commander William Riker (Jonathan Frakes). However, the nature of The Next Generation afforded relatively little space to explore the day-to-day reality of Troi’s work. 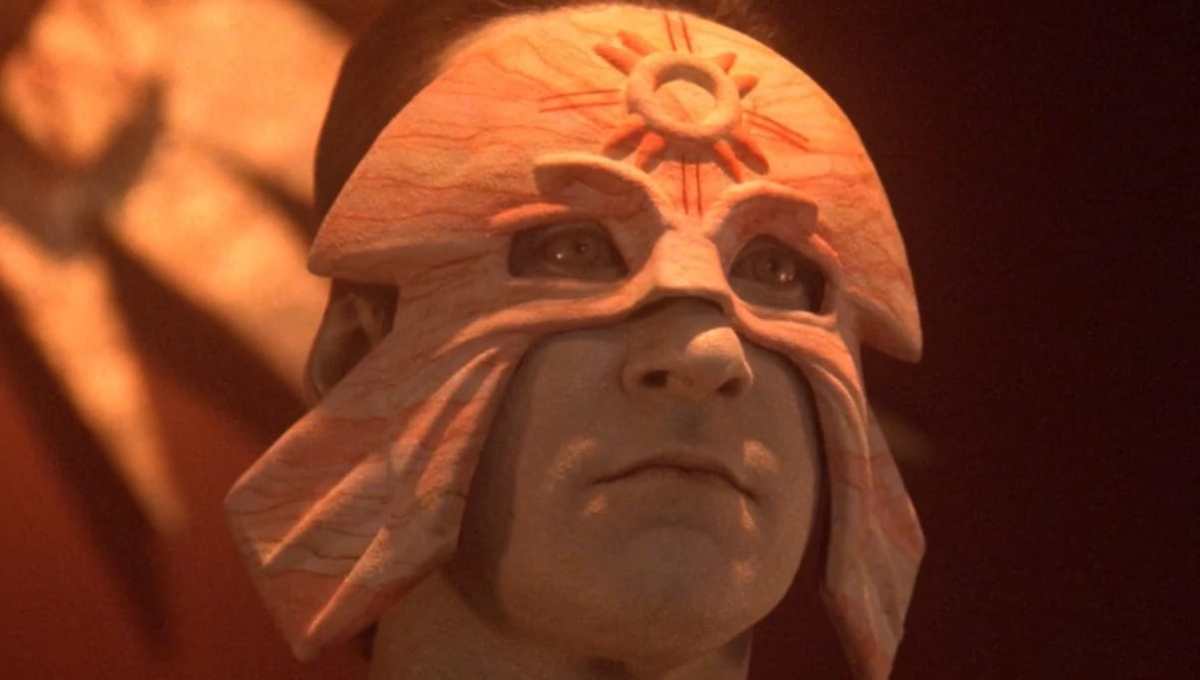 In contrast, there is something heartening in seeing Lower Decks treat that engagement with mental health as just a fact of life, with Freeman arranging “a therapeutic getaway” for her engineering staff. “Room for Growth” escalates that concept quite cleverly, first with the revelation that engineers make poor spa guests, and then with the suggestion that their inability to relax only compounds Freeman’s own tension, after “repressing months’ worth of stress.”

There is something innately charming in all this, in the idea that Billups and his crew find their stress relief in problem-solving and that Freeman’s worries about her crew’s difficulty relaxing is a source of stress itself. The episode takes a simple starting point and approaches it from two interesting perspectives. It all builds to an optimistic resolution, as Billups and his staff become so upset at the frustration that they have caused Freeman that they effectively engineer the perfect relaxation tool. It’s oddly heartwarming.

The subplot focusing on Mariner, Boimler (Jack Quaid), and Tendi (Noël Wells) is a little less focused. Believing a set of quarters to be up for grabs, and with Delta Shift threatening to rig the draw, the trio embark on an adventure through the bowels of the Cerritos to throw the raffle in their own favor. In reality, this is just an excuse for Lower Decks to follow these characters through a variety of unlikely settings and locations. It’s not so much a plot as a connection of disjointed vignettes.

While it doesn’t necessarily add up to a satisfying story in its own right, there is a geeky charm to all of this. After all, fans love poring over the specifications of these ships, spotting Easter eggs and locations that will never appear on screen. Showrunner Mike McMahan joked that he got to realize a “dream” by actually depicting the long-teased Cetacean Ops on screen. One of the smaller and more charming jokes in “The Least Dangerous Game” was the idea that the Cerritos has three choir rooms. “We’re in parts of the ship almost nobody gets to see,” explains Tendi. “I think this is super cool.” Like the references to the Next Generation VHS board game in “The Least Dangerous Game,” there’s a pleasure for fans in getting to see what lies beneath the arboretum or what the inside of the deflector dish looks like. It isn’t the most satisfying narrative imaginable, but it works well within the show’s framework. This is what Lower Decks does, and this is what Lower Decks enjoys doing.

It helps that “Room for Growth” balances earnestness and glibness quite well. There’s something oddly warm in watching Shaxs and T’Ana (Gillian Vigman) work through their relationship together while engaging in “crimeplay” on the holodeck, particularly Shaxs’ attempts to get T’Ana to open up to him. “I died and we never even talked about it,” he confesses, which suggests a lot about the emotional lives of these characters who exist on the margins of Lower Decks.

However, “Room for Growth” avoids getting too saccharine. The episode is driven by the conflict between the primary cast and Delta Shift. However, towards the climax of the episode, the two teams find themselves sharing the same room. It is very similar to what happened with the Carlsbad crew in “Mining the Mind’s Mines.” It even seems like the characters will learn mutual respect and admiration. “You know, we’re really not, like, that different,” Boimler admits.

This builds to two wry and subversive punchlines. First, Delta Shift immediately betrays their new friends, revealing the camaraderie to be a façade. Then, when Boimler discovers there’s only a single room being raffled, he argues it’s better to not break their friendship and that they should let Delta Shift fight over the room. It’s an emotional moment, until Delta Shift comes up with the obvious solution of just sharing the room among themselves, rather than continuing to bunk in the corridors.

It’s a clever way of undermining a somewhat trite ending to the adventure, feeling almost Seinfeld-ian in its rejection of the facile “hugging and learning” that often wraps up these sitcom adventures. For Lower Decks, it is just another day on the job.