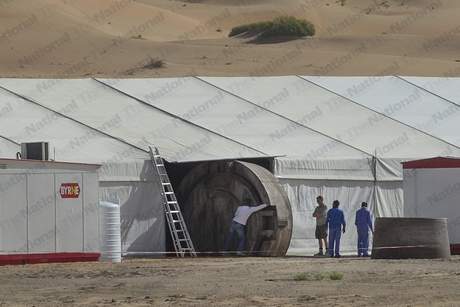 Abu Dhabi could be the new Tatooine.

Earlier this month, Disney Studios chairman Alan Horn revealed that filming had already begun on Star Wars: Episode VII, but the movie’s set locations remain a tightly held secret. However, a few leaked photos from a desert in Abu Dhabi are fueling the rumor mill.

The photos were taken on Tuesday by The National’s Mona Al Marzooqi. They aren’t particularly interesting, unless you’re a big fan of tents and ladders. But workers can be seen rolling a large mystery disk, which looks aesthetically similar to many of the elements from the previous films.

Though, it kind of does look the bottom of an AT-AT’s foot… That other piece could be the top. I’ve attached a diagram to justify my ridiculous speculation.

Star Wars: Episode VII will hit theaters in December of 2015.