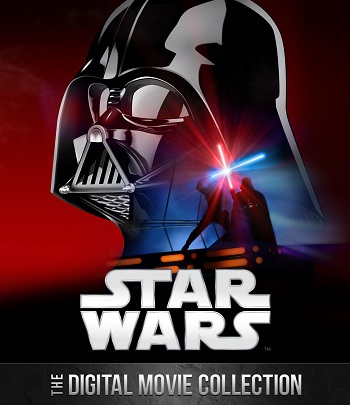 Disney and Lucasfilm have announced plans to release Digital HD editions of the prequel and original Star Wars trilogies.

It seems like the most natural thing in the world these days for movies to be available digitally. Sincerely, just think for a moment about of all your favorite films from the past few years and tell us if you can think of any that you couldn’t be watching on your smartphone within five minutes if you really wanted to. It’s odd to think, in turn, that Star Wars, one of the most famous film franchises in history, has never been available before in a digital format.

Hoping to rectify that, Disney and Lucasfilm have announced that they’ll be releasing Digital HD versions of the Star Wars movies this Friday, April 10th. The new releases will be available at most major digital vendors and include all six of the series’ feature films. According to Walt Disney Studios president Alan Bergman, the new digital versions are aimed at giving fans more ways to enjoy their favorite movies. “Since the debut of the first film nearly 40 years ago, Star Wars has become a worldwide phenomenon with legions of fans from every generation,” he said. “It’s only fitting that audiences enjoy this legendary saga and its many fascinating behind-the-scenes stories on a wide variety of platforms.”

The new versions won’t just repackage the existing movies either. Lucasfilm president Kathleen Kennedy has affirmed that they’ll come with “never-before-released” features that “[delve] into the saga’s rich history.” These will reportedly include “conversations between legendary Star Wars artists” as well as other specials that may vary depending on who you buy them from. The films will be purchasable as a package or individually and the full list of planned bonus features can be found here. Sadly, since Disney and Lucasfilm haven’t specified otherwise, the new digital versions are most likely based on the existing high definition editions. In other words, still no HD version of the unedited original trilogy.