This is pure escapism. 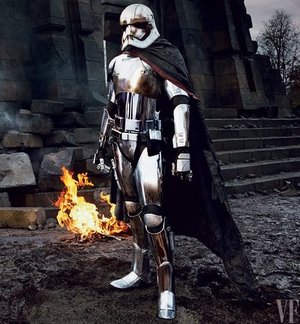 Yesterday’s Star Wars Day brought along some new information for the upcoming film, Star Wars: The Force Awakens, but some of the most interesting teasers came from Vanity Fair and famed photographer Annie Leibovitz. Her series of images featured the cast and crew of the much anticipated film, painting new heroes and unique villains into their natural habitats effortlessly. Vanity Fair’s exclusive coverage of the images also included an official confirmation that “The Chrometrooper” (seen here) is the one, the only Game of Thrones actress Gwendoline Christie (a.k.a. Brienne of Tarth).

According to Vanity Fair, “Christie’s character is actually named Captain Phasma and is a member of the First Order-the film’s new version of the evil Empire.” She looks stunning and inherently badass in her full chrome suit, and she’s not the only one. New baddie Kylo Ren, played by Adam Driver, looks just as ominous in his juxtaposing all-black ensemble.

Also pictured is Lupita Nyong’o, covered in tracking dots to help make the magical transformation into animated character Maz Kanata happen, and Resistance pilot Poe Dameron posing with his X-wing. Lastly, there’s shots of new heroine Rey and her speeder, and an ensemble shot of assorted galactic smugglers and travelers. And last but not least, the official Vanity Fair June cover featuring the rebels themselves and beloved buddies Han Solo and Chewie.

Check out the images below and let us know what you’re most excited to see in Star Wars: The Force Awakens.