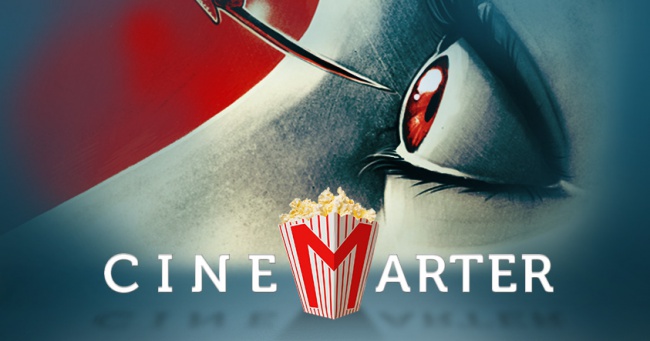 It’s probably not a stretch to say that Stung is one of the best “flying killer insect” movies ever, but then try to think of just one genuinely good “flying killer insect” movie. Actually, it’s difficult enough just to think of a good “killer insect” movie without adding “flying” to the search parameters. The point is, there aren’t a lot of them. The genre is filled with schlock, most of which are only good for watching with some buddies and a few pops. If you’re watching these types of movies to see a genuinely good movie, you’re going to be out of luck. That doesn’t change with Stung, by the way, although it’s at least not bad enough to be unwatchable, which I suppose puts it somewhere near the top of the class by default.

The story is as simple as they come. Julia (Jessica Cook) runs a catering business, taking over for her recently deceased father. Under her employ is a bartender, Paul (Matt O’Leary), for whom she has much disdain, even if that’s just masking her clear love for him. Their potential romance is something teased throughout the entire film, as they slowly learn to love each other thanks to the crisis at hand. The crisis, by the way, is an attack by giant, mutant, killer wasps. They show up out of nowhere – explained away by a growth hormone-infused fertilizer – kill a bunch of meaningless supporting characters, and then the survivors have to try to survive the night, all while being picked off one by one by the wasps. 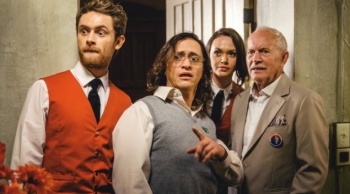 So, you’ve got a couple of characters we’re supposed to like – we may, marginally, if only because they’re not completely unlikable – we’ve got a ton of giant killer wasps, and then we let them do battle. It’s a basic setup, it lets lots of people be stabbed through the jugular by giant killer wasps, and there’s really not a whole lot to the movie outside of that. Most readers will already be able to tell whether or not they’re going to have fun with Stung. And if you can’t, then chances are it’s not for you. It has giant killer wasps. If that doesn’t sell you, nothing will.

The wasps themselves have been created with either practical effects or CGI, depending on the scene. You’ll be able to tell which method is used at each point, which takes you a bit out of the film. The CGI isn’t good – the film isn’t a big-budget blockbuster, after all – so whenever we switch to it, you can tell. The practical effects act as a throwback to creature features from decades earlier, and work significantly better, giving the actors something with which to interact, instead of having to act with creatures that will be added later with computers.

Speaking of the actors, they’re … there, I guess. They have to look scared and not much else. Matt O’Leary plays a manchild who snaps into action-hero mode as soon as the wasps start attacking – but never forgets to continue to chase the one female close to his age. Jessica Cook plays a professional woman who gets a few fun moments to wreak carnage upon the wasps, but otherwise does very little to impress the audience. Lance Henriksen and Clifton Collins Jr. show up in supporting roles, and that’s swell news given how much fun they clearly have in schlock like this. 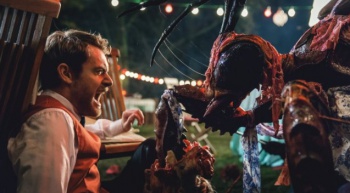 Make no mistake: Stung is schlock. It’s cheesy, it’s clearly low-budget, and it has no ambitions beyond letting you see giant killer wasps kill humans – and then vice-versa. It’s reminiscent, at times, of killer insect movies from the ’50s, or the ’80s, although let’s just take a moment to remember that, especially when viewed through a modern perspective, most of those movies weren’t good, either. These types of movies are best enjoyed with friends who enjoy mocking bad movies, or laughing along with movies that know they’re bad. Stung is more the former than the latter, although it’s still better than most of its peers, so at least there’s that. It could have easily been unwatchable, or simply no fun. You’re bound to get some laughs from Stung, even if most of them will come from its flaws rather than its triumphs.

Recommendation: If giant killer wasps are enough to sell you on a movie, see Stung. Otherwise, avoid it.

Beyond Unreal – Check Out These Insane Unreal Engine 4 Scenes