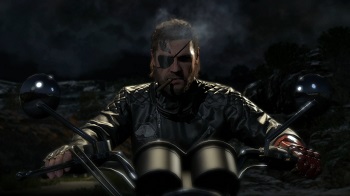 After a decade, Solid Snake returns to the PC.

So much for secrets. Earlier today, Konami’s website briefly revealed a PC version of Metal Gear Solid V, both Ground Zeroes and Phantom Pain. That post has since vanished, but Hideo Kojima later took the stage at Gamescom and announced it publicly: Metal Gear is coming to the PC via Steam.

Both games’ Steam pages have gone live. While Ground Zeroes was derided as little more than an expensive demo, the real meat-and-potatoes will arrive in the form of Metal Gear Solid V: Phantom Pain. They also showed off 15 minutes of gameplay, which should give you an idea what you can expect. It features both cardboard boxes and Snake going full-on Kurt Russell, which is all anyone could really want out of a MGS game.

This marks the first PC port for the series since Metal Gear Solid 2. That was back in 2003, and it required a DVD drive (something that few gamers had then, and may not have now). While you might not be able to easily play the previous titles on the PC, but you can watch this 7 hour supercut of all the talky bits in MGS 4 to get caught up.

As surprising as this might be, it’s not all that unexpected, as the Rising Revengeance spin-off has been on Steam since last year.

Neither game has a release date as of yet.