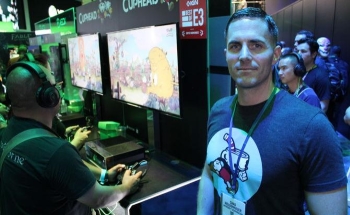 While the success of the indie game Cuphead has been the talk of many gaming sites, the controversy before launch stole most of the spotlight. It was apparent to everyone that articles demanding the game become easier would follow when when Dean Takahashi, a GamesBeat reporter, showed gameplay that was reported as ‘cancerous.’ While the studio has remained silent regarding this, one of the developers has been recently critical of the whole ordeal.

“If you’re too much of a wimp to handle running and shooting at the same time, you need to get the hell out of the gaming industry. I don’t mind people not liking this kind of game but to actually argue to skip content because you don’t like it is another thing entirely. Go back to playing Casualbourne, real men play Contra while shotgunning a beer,” said Chad “The Bull” Moldenhauer, co-founder of Studio MDHR.

“Gaming journalists are the lowest of the low. They’ll complain about how you are objectifying women,” he said, setting his Pabst Blue Ribbon on to an end table shaped like Tracer’s posterior, “they only get this way because they crave attention from real news sites. If I see someone writes or works with a gaming press outlet, I automatically think lesser of their opinion.” Behind him on the wall, a framed 10 / 10 review for Cuphead rests regally above his stuffed moose head.

“I find that the real irony is that these people want diversity in games but don’t have diversity in their own ranks. Look at how many of them are white college-educated liberals who want to live in the city; you can’t.” The sound of a siren passing in the crowded street below echoes its way into his penthouse apartment. “Now go ahead and fill my Twitter and email inbox with how much of a Nazi alt-right white guy who hates everyone with more melanin than him,” said Moldenhauer.