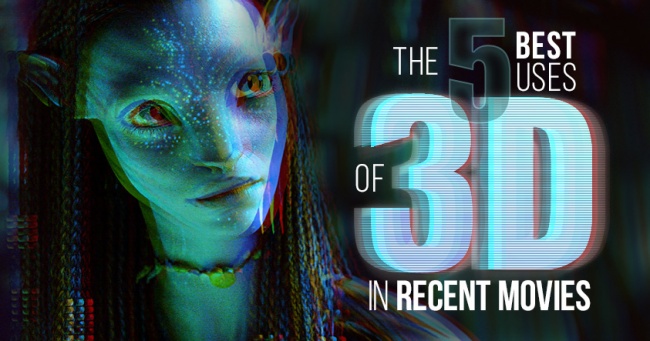 This past week saw two of its three wide-release theatrical films come out with predominantly 3D showings – at least in the cinemas I go to. All animated films nowadays tend to be in 3D, so it wasn’t a surprise that Kung Fu Panda 3 was released in that format. However, The Finest Hours also was, and the 3D was atrocious. It was post-converted, not shot, to 3D, so you’re not going to get much benefit anyway. But since most of it takes place at night, and the glasses cut down on the light entering your eyes, the 3D decision sometimes made it hard to discern the images on-screen.

With that said, there are some films out there that use 3D in such a way that it benefits, not hinders, the audience. Today we’re going to celebrate those films – a reminder that just because something is terrible or unnoticeable 99% of the time, that doesn’t mean it can’t sometimes, if used by a talented filmmaker, be worthwhile.

Avatar gets a lot of hate – a lot of it justified – for leading us on the 3D fad that we’re currently on. Studios saw how it was making all of the money, mostly because of how amazing its visuals are, and decided to follow suit. That decision led to 3D atrocities like Clash of the Titans.

But Avatar was an unbelievable theatrical experience – and one of the best uses of 3D ever. The technology helped lure us into the world that James Cameron had built. It ensured that we were immersed in its vast forests. It gave genuine depth to the images. It didn’t try to use 3D as a gimmick; no, it was instead a tool to bring us into its world. It may have kicked off a fad from which we can’t seem to escape, but it was revolutionary at the time, and absolutely worth the experience.

Werner Herzog‘s Cave of Forgotten Dreams is a documentary that takes us into a French cave to bear witness to paintings dated thousands of years old. Here, the 3D is used to give texture to the paintings, to make us see them not as flat images on a screen, but as one might see them in their natural habitat. The cave walls feel as if we may be able to reach out and touch them – and not in the way that the “pop-out” gimmick in older 3D films worked. Once again, we see a legendary director using 3D to enhance the work, not just drive up prices at the box office.

At times, Goodbye to Language acts as a subversion of classic 3D conventions. Instead of always using it to simply create an illusion of depth in the images, Jean-Luc Godard instead used the 3D effect to show us two overlapping images at once. Seeing it in 3D, one could close an eye and see a different image than if he or she closed the other. Used in the context of the film, it allows for both comparisons and separations. Two stories become contrasted and linked, despite still being separate. It’s a genius technique and one of the few films in which watching in 3D is essential to getting the full experience.

One of the problems with 3D is that the glasses you need to wear in order to experience it cut the brightness by a significant percentage. In dark movies, that can make certain scenes almost unwatchable. So, then a film like Gravity might appear like a perfect candidate to not be in 3D. Despite this, being able to tell what’s happening on-screen never becomes a problem. Alfonso Cuaron figured out a way to ensure that there’s always enough brightness to stop the glasses’ effect from ruining the image projected on the big screen. He also used 3D to give us a real sense of both the vastness of space, and the danger of almost every scene. You can take off your glasses in some films and see little change; in Gravity, there are layers upon layers of depth.

Hugo has a few shots that would not be possible if they were not in 3D. Seeing them in 2D diminishes their impact. This is a film – at least in part – about Georges Melies, a man who basically invented the idea of special effects, and his story is being told by Martin Scorsese, using 3D in a way that it never had been used before. That sort of clever parallel is fantastic. Hugo is so fantastic in the visual department that it remains one of the few films to do 3D right.

Isn’t it interesting that the best uses of 3D come from legendary directors like James Cameron, Werner Herzog, Jean-Luc Godard, and Martin Scorsese? (Alfonso Cuaron isn’t there yet, but he’s getting there.)

What have been your best 3D experiences?