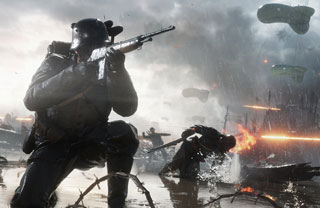 The latest update for Battlefield 1 went live this morning, and it’s bringing a ton of changes to DICE’s World War I shooter. Titled the “Winter Update,” it’s not only adding more content, it’s bringing back some features from previous games in the series.

For example, Ribbons have made their return. You can collect 20 different ribbons, and each one will reward you with 300 XP when you receive it. Assuming that these ribbons work as they have in past Battlefield games, you’ll receive them for healing, resupplying, getting kills, and basically doing things that help your team.

The maximum class ranks have been increased as well. You can now reach rank 50 in each class, and every 10 ranks, you’ll receive a Battlepack. At level 50, you’ll get extra class flair that shows up in the kill card seen by your opponents. You’ll also unlock new Dog Tags that unlock as you gain levels.

Another new feature is the Elite Codex. Eight of the game’s primary weapons now have an Elite Codex available to unlock when you get 500 more kills with that weapon. Manage that, and you’ll get the Elite Codex, as well as 25,000 bonus XP.

There are a ton of other changes in this update, including bug fixes and balancing changes. Two notable changes are a decrease in the duration of gas from 22 to 15 seconds, and a tweak to eliminate getting killed by a cavalry saber from several meters away.

You can see all the updates and a complete list of all the tweaks and changes in the patch notes on the official Battlefield website. This list is long, but worth checking out. The update is expected be live on PC, PS4, and Xbox One sometime today.