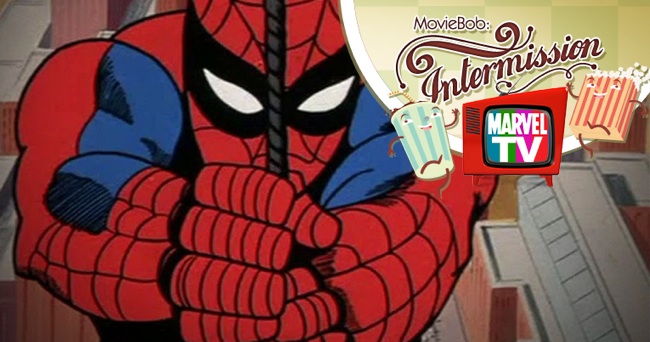 Marvel’s television efforts weren’t always hits, but that didn’t stop the company from trying. And trying.

In case it hasn’t yet become abundantly clear, Marvel Comics wanted its roster of superhero characters to spread out across multimedia from the very beginning. The entertainment world we live in now — where “Marvel” is at once the powerful brand name across Hollywood and a singular Hollywood studio in its own right, where rival studios compete for box-office supremacy with movies based on Marvel characters, where the Marvel name can get audiences to turn out in record numbers for a movie about a space raccoon — is the culmination of a long (longer than they would’ve liked, surely) game play begun by Stan Lee and the gang back in the earliest days of their would-be empire.

The strategy? Put your guys in anything. Anything.

Kiddie education shows? “Sure!” (And yes, that’s who you think it is narrating.) Loose Japanese reworkings? “Done!” Terrible TV movies? “Why not?” An unbelievably embarrassing wedding stunt? “We’re getting paid for this, right?” It has not been, suffice it to say, a terribly dignified track record — particularly when rival DC Comics spent those same decades being represented by genre-defining megahits like the Adam West Batman, 1978’s Superman and The Superfriends.

But in the 60s, 70s and 80s Marvel tried its level best to make its four-color heroes into cartoon stars as well, with… marginally better (or, at least, more memorable) results than most of their live-action offerings. For many a young fan in those eras, these offbeat adaptations were the first exposure to characters who’d become their favorites — which might help to explain how truly bizarre Marvel fixtures like Thor and The Sub-Mariner gained lasting traction in the first place.

This week, we’ll take a look at the animated offerings of the swingin’ 60s and the… also-swingin’, but in a vaguely less “innocent” sense of the word, 70s. Starting with: 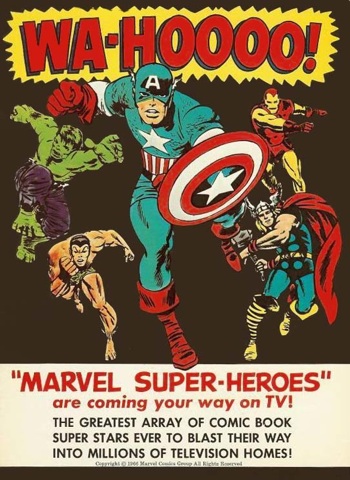 THE MARVEL SUPER HEROES (1966)
Produced by Grantray-Lawrence Animation, the first cartoons to feature Marvel heroes were an absolute trip — time capsules of an era when kids’ TV was as low-rent and corner-cutting as you can imagine. The Marvel Superheroes was an anthology-style series based around rotating adventures starring either Captain America, Iron Man, The Hulk, Thor or Sub-Mariner; each with their own maddeningly-ingratiating theme song. In some markets, networks like Boston’s WNAC would dress local TV personalities up in Marvel costumes to introduce the shorts.

The series is today best known for its infamously cheap animation, which was accomplished by taking stills from the actual comics and adding minimal animated touches like limbs changing position, lip movements or disappearing/reappearing sound effects balloons. While not quite as surreal as the infamous “Syncro-Vox” technology (which superimposed human actor’s mouths onto barely-animated figures’ faces) employed by the likes of Clutch Cargo. It’s still incredibly bizarre and easy to see why its sheer weirdness coupled with the wide recycling of the individual shorts as filler-material for other kiddie-broadcasts for decades after made an indelible mark on the psyches of generations, inspiring parodies like Minoriteam well into the present.

Interestingly, despite not being a popular book in their then-present incarnation, The X-Men made their animated-adaptation debut in one of the Sub-Mariner episodes. The story was an adaptation of a comics adventure that had involved The Fantastic Four, but they were unavailable — so The X-Men were used to fill their role.

Where were the Four? Starring in their own series for a competing animation studio… 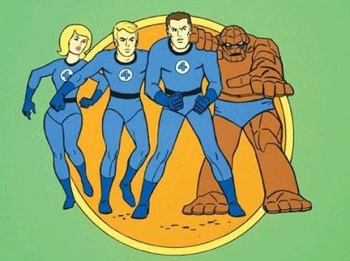 FANTASTIC FOUR (1967)
Hanna-Barbera’s 1967 Fantastic Four cartoon is, full-stop, one of the best early superhero adaptations to TV. Yes, it’s cheap HB-standard animation. Yes, it strips a lot of the more truly unusual nuance from the Lee/Kirby classic tales being adapted. But compared to almost everything else doing the same job on TV it was frequently the best of the bunch.

Over the course of 20 episodes, fans got to see Marvel’s First Family square off with everybody from Galactus to Dr. Doom to Blastaar the Living Bomb. Good stuff. Everyone is in character, everything feels “right” to the Marvel books of the era, there’s actually very little to complain about or say other than “Hey, those were some good cartoons!” Of some amusement: The same rights issues that kept Reed Richards and company out of The Marvel Super Heroes also kept Sub-Mariner out of this series, so instead the team faces off against a new character named Triton.

If only Hanna-Barbera could have been given control of other Marvel properties, the history of Marvel ‘toons might have been a lot different. Unfortunately for Marvel, once HB had figured out how to adapt what was then the cool new breed of superhero into animation, they decided to make a whole slew of original heroes of their own. Those shows, along with Fantastic Four, would become effectively immortal as part of the long-running programming block Hanna-Barbera’s World of Super Adventure. 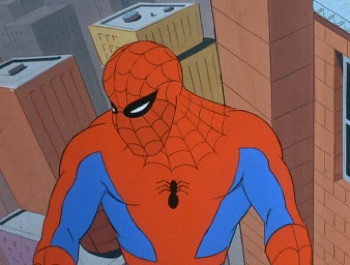 SPIDER-MAN (1967)
The big one. Even if you’ve never actually watched an episode. You know the look. You’ve seen the memes. You’ve heard the theme song.

The 1967-1970 Spider-Man probably did more to turn Marvel’s webbed-wonder into a superhero A-lister than any of his actual comics did, in terms of exposure to the broader public. In an era when kid’s TV shows were seldom expected to run more than a season (if that) before slipping comfortably into re-run oblivion, Spidey proved popular enough to get three full seasons — an amazing achievement considering that the Marvel heroes were largely still considered superhero also-rans next to the evergreen big guns like Batman and Superman.

That’s not to say that this incarnation of Spider-Man is especially good — it’s not, especially compared to the aforementioned stuff Hanna-Barbera was putting out in the same era — but it clicked. That Spidey was, even then, so different from any other hero in terms of his civilian life and powerset that he stood out: This was very clearly NOT just Superman with a different coat of paint.

The show’s first two seasons, put together by Grantray-Lawrence again but with a notable upgrade in animation quality from the animated-panels approach taken by The Marvel Super Heroes, are generally regarded as the best of the lot — largely-faithful translations of classic Spidey stories and villains and featuring one of the more memorable J. Jonah Jameson interpretations. The third season was produced under Ralph Bakshi, otherwise a maverick legend of animation but whose efforts on Spider-Man look exactly like the hired-gun job it likely was. At least two episodes were made by repurposing footage from Bakshi’s earlier scifi/fantasy series Rocket Robin Hood, ironically the main reason that series is remembered today. 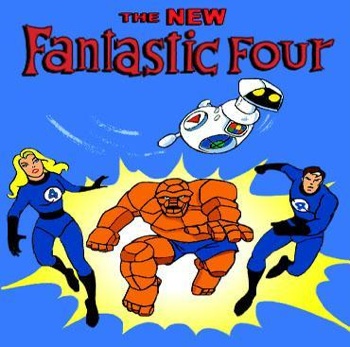 THE NEW FANTASTIC FOUR (1978)
DePatie-Freleng Enterprises decided to give The Fantastic Four another try in 1978 with a bigger animation budget and better techniques overall than any Marvel cartoon previously… but with one big missing element: They could only use three of the four heroes. Johnny Storm, “The Human Torch,” was off-limits.

For years, the legend held that spurious TV censors had “banned” the character in fear that America’s impressionable schoolchildren might light themselves on fire in an imitation of his powers. Amusing, but the truth is more mundane: Marvel had been trying to sell a pilot deal for a live-action solo series featuring Torch to Universal (he would’ve been a race car driver and unaffiliated with the FF) at the time, and didn’t want him in cartoons muddying the rights waters.

The animation studio’s solution? A helpful flying robot named H.E.R.B.I.E (this was a year after Star Wars, so beeping robot sidekicks were as cool as they were ever going to get) became the new Number 4. Apart from the oddity of Johnny being replaced by an R2-wannabe, the series is fairly unremarkable — decent animation, nice versions of classic FF villains, but it’s a footnote for a reason. H.E.R.B.I.E was reviled for years by fans, Jar-Jar style, but in recent decades he’s been gradually integrated into the comics to a mostly positive reception.

FRED & BARNEY MEET THE THING
Once again: Please consult The Big Picture for deeper context. Short version: Hanna-Barbera did a run of solo cartoons featuring a teenaged version of the The Thing who used a magic ring to change from human to monster, and for some reason they stuck them next to pieces from one of the myriad Flintstones do-overs from the same period as a single programming block. It’s pretty horrible. 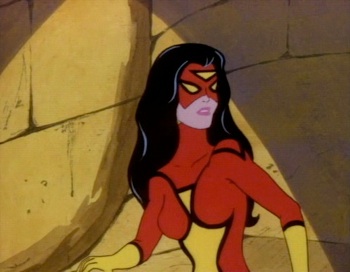 SPIDER-WOMAN (1979-1980)
As I’ve mentioned elsewhere, Marvel’s fear of TV producers creating female versions of their licensed heroes to cut them out of rights deals inspired them to create two distaff-counterparts on their own. The first was The She-Hulk, the second was Jessica Drew: Spider-Woman.

It’s a shame that she was for so long mainly known for the tacky business stuff surrounding her origin, because Spider-Woman kind of rules. She has a great costume, nifty origin story, an interesting (if notoriously inconsistent) power-set, etc. And the cartoon? It’s pretty good — rendered in a grime-and-neon color palette that nicely captures the New York of the Marvel Universe at the tail end of the Disco era. Give it a watch, you’ll see.

Marvel cartoons (apart from Spider-Man) spent most of this era living in the shadows of DC material and original heroes from the likes of Hanna-Barbera. But the tide would change as the 1980s dawned. The first seeds of Marvel’s pop-culture takeover were about to be sown, and we’ll recall how it started… next week.