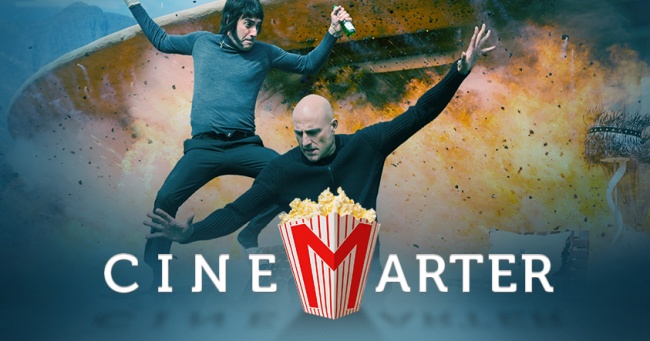 I think it’s time that we seriously have to consider what we’re allowing Sacha Baron Cohen to get away with at the cinema. After a couple of rounds with Baron Cohen’s characters, it gets tiresome. Borat was the peak, and it’s just been downhill from there. That’s too bad, since Baron Cohen is undoubtedly talented, funny, and willing to do pretty much anything to get a laugh, but the characters he’s played recently, and the films in which they’ve been included, just haven’t worked.

The Brothers Grimsby sees Baron Cohen play Nobby Butcher, a low-class, small town British man who lives for the English football team and the endless number of children he’s helped spawn. He misses his brother, from whom he’s been estranged for the last 20+ years, but life’s going pretty well for him. However, after hearing word his brother was attending an important event, he manages to get inside, find his brother … and promptly ruin his brother’s plan to stop an assassination attempt. His brother, Sebastian (Mark Strong), is a top MI6 agent, and because of Nobby’s unwarranted intervention, he’s pointed as the assassin – a spy gone rogue. So, Sebastian has to go through the most basic of spy plots in order to clear his good name, taking Nobby with him for plot reasons. 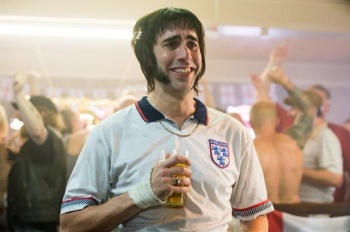 The idea at play is that this is a spy movie, but one of the spies is a moron. Along the way, he’ll make tired pop culture jokes – Donald Trump and Bill Cosby jokes are present here, for example – as well as ones that are meant to shock and offend. More often than not, it feels tired. It’s like the creative juices have run out, and Nobby just isn’t as strong a character as some of the ones Baron Cohen has played in the past. The jokes, meanwhile, lack the bite, and are more cringeworthy and disgusting than truly funny or offensive. I set my personal expectation at 12 laughs, and The Brothers Grimsby failed to hit even half that number of times.

However, with that said, one of the things that I’ve always admired about the Baron Cohen-led films is that they know not to overstay their welcome. The Brothers Grimsby runs for just over 80 minutes (with credits), as do all of the films where he plays an outrageous leading character. It’s an acknowledgment that an overload of this style of humor will turn audiences away, and it’s a savior for a film like this if you’re not enjoying yourself. At least it’s one of the shortest theatrical experiences of the year. Small victories, right?

The Brothers Grimsby is the worst Sacha Baron Cohen movie so far, and that’s pretty impressive considering he starred in The Dictator.

There’s a pretty easy test to determine if The Brothers Grimsby is right for you. It involves two questions, and if you answer “yes” to both of them, you’ll probably have a good enough time. (1) Did you like the previous Sacha Baron Cohen-led films: Ali G Indahouse, Borat, Bruno, and The Dictator? (2) Does the sentence “Daniel Radcliffe gets AIDS” make you laugh? Because that’s a joke in the film. Seriously. “Well-liked actor gets an incurable and life-altering disease” is supposed to be funny.

At his best, Sacha Baron Cohen uses his characters to make a point. Here, that point is missing. The Brothers Grimsby is a venomless film, hoping that the jokes are enough to carry the film. So, when the jokes fall flat – as they often do here – there’s nothing else. And without the sharpness behind the jokes, the offensiveness isn’t going to do more than make people cringe – at their best, in other movies, they’ll offend but make you think about why they offend. They act as social commentary, but here that’s been ignored for, primarily, grossout humor.

The Brothers Grimsby has a couple of other issues beyond the comedy. Since it’s a spy movie, there are a few action scenes scattered throughout. They range from boring to borderline incomprehensible. There are two Doom-esque first-person scenes that in no way, shape, or form work, and they make one really wonder about how Hardcore Henry will work when it’s released in a month’s time. The supporting cast plays everything straight and that often leads them looking uncomfortable with Baron Cohen’s actions, unable to turn in anything close to good performances because they’re so focused on keeping a straight face. I felt sorry for Mark Strong, Isla Fisher, and Penelope Cruz. This is a black mark on their careers.

The Brothers Grimsby is the worst Sacha Baron Cohen movie so far, and that’s pretty impressive considering he starred in The Dictator. It has a handful of laughs – five or fewer – scattered throughout its mercifully brief running time, but they’re nowhere good enough to make the film worth seeing. Most of it is cringeworthy, there’s no bite behind the offensive comedy, and some of it feels like it has been rehashed from Baron Cohen’s previous work. There’s nothing here to like.

Bottom Line: Stupid and lacking the venom of his earlier films, The Brothers Grimsby is the worst Sacha Baron Cohen film so far, and a black mark on the careers of everyone involved.