The Church in the Darkness director, designer, and writer Richard Rouse III doesn’t remember a time when he wasn’t interested in cults.

“Cults are a fascinating thing,” he said. “You find out they’re not really crazy so much as misguided or deluded. So many [members] of them are getting self-help aspects out of it where it helps them improve whatever situation they were in before, or they feel like they’re changing the world.”

Rouse included a cult in his second game, the tactical shooter Damage Incorporated, and now he’s made one the center of his infiltration game The Church in the Darkness, which launches on Aug. 2.

“As a game designer, you’re always thinking about what’s a cool place to go to that’s a contained ecosystem that can explain why you’re just in this one space and not leaving,” Rouse said. “Cults isolate themselves and build in the middle of nowhere and don’t let anyone else in. That’s a fascinating place to go in a game.”

Set in the late ‘70s, The Church in the Darkness follows Vic, a former law enforcement officer who travels to South America to try to extract his nephew Alex from Freedom Town, a compound run by the socialist Christian group the Collective Justice Mission. While sneaking around, players will constantly hear PA broadcasts from the group’s charismatic leaders Isaac and Rebecca Walker, who are beautifully voiced by real life couple John Patrick Lowrie (Team Fortress 2) and Ellen McLain (Portal). Rouse had worked with Lowrie on The Suffering games, and he was one of the first people he discussed The Church in the Darkness with before starting development.

“I thought it would be awesome to get them to do this together,” Rouse said. “I wanted not just one cult leader talking over the PA system the whole time. I think one voice would get a little too monotonous potentially, though John’s really good so it probably would have worked anyway.”

The motivations of the Walkers shift between playthroughs, though if you die you can choose to replay with the same preacher personalities. In one version of the game, the couple could seem to be in perfect harmony while in another the broadcasts show a rift in their relationship. These factors, along with the decisions the player makes like whether or not to kill guards, who they work with, and how they treat Alex, lead to one of 19 different endings for the game. 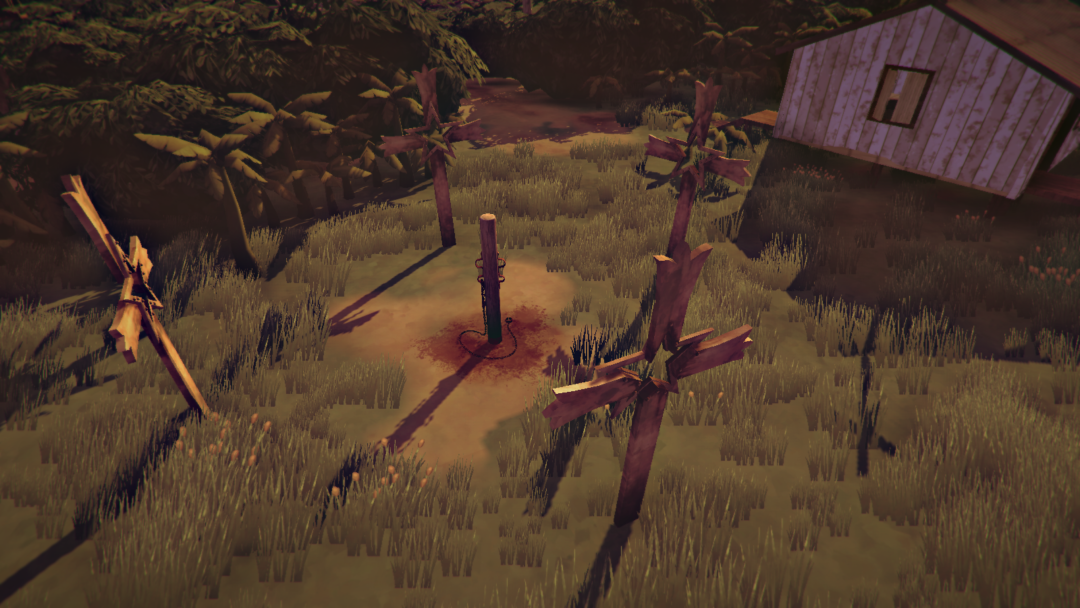 “As an indie, making a very content-heavy bespoke game that you play once and it’s finished is risky,” Rouse said. “I like the idea of being able to reshuffle the content where it’s still compelling each time. You’re replaying it and really having a whole different context for the decisions you’re making.”

The broadcasts also offer insight on the group’s ethos based on Rouse’s research on social movements of the era, which were often focused on wealth inequality, racial justice, and LGBTQ rights.

“My hope is that players will listen to what they’re saying and think, ‘They do have a point about that,’” Rouse said. “They’re not just saying crazy stuff all the time. It’s crazy what they’ve done, but they’re saying stuff where you could say, ‘I could get down with that.’ All the antagonists I’ve done are heroes in their own mind.”

Characters discussing police shooting African Americans, attacking liberal elites, or questioning American exceptionalism seems especially relevant today, but Rouse said that’s unintentional. He began working on The Church in the Darkness during the Obama administration and was accused of bashing socialism when the game was announced while Bernie Sanders was running for president. 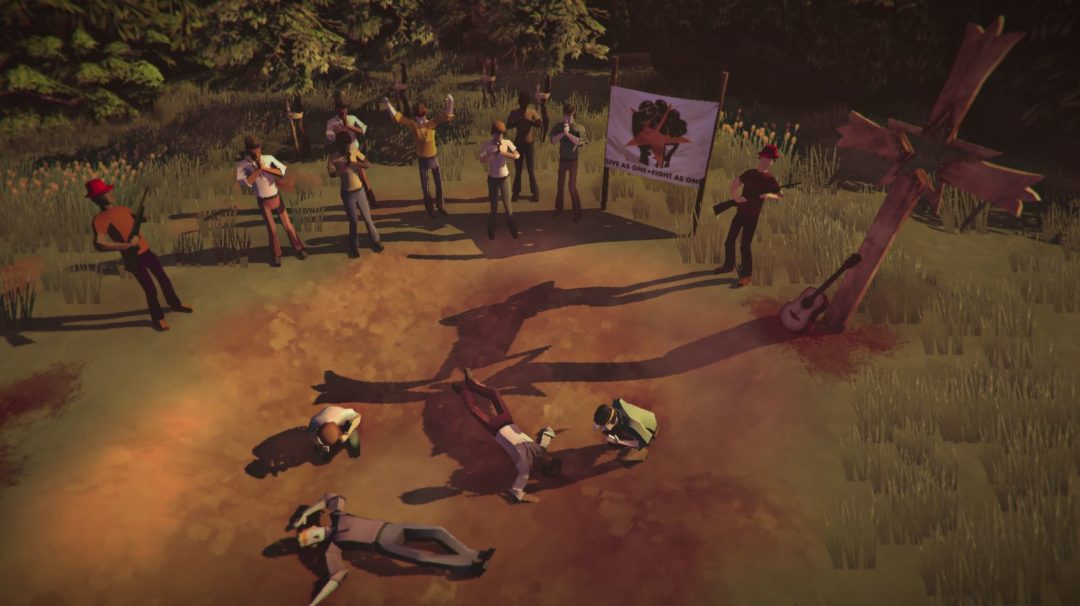 “I just wrote something that I thought was interesting,” Rouse said. “I think this setting would have been interesting 10 years ago too. It’s just the context for it keeps swimming around and changing under it.”

Rouse had spent the last decade working for AAA studios on titles including Rainbow 6: Patriots and State of Decay, but he knew he’d have to do The Church in the Darkness on his own to make the game he wanted.

“If you have to sell 8 million copies, how are you going to take on a cult this weird and this specific and this potentially offensive?” he asked. “If you were going to do this, you might have had to pull back on a lot of the specific subject matter in the game or to pull out historical figures or to try to make it more apolitical. I think it just becomes a very different thing at that point.”

An indie game gave Rouse the freedom to make attacks on Henry Kissinger and Jimmy Carter and got him back into programming again. But he also took some lessons from his AAA days with him, particularly his work on State of Decay. Rouse said he was inspired by a mission where Lily Ritter, who talks to the player over the radio throughout State of Decay, asks them to retrieve her father’s watch from a zombie-infested area. Even though there’s a high risk and no reward, many players completed the quest just because they felt a bond with Lily after listening to her voice for 20 hours. 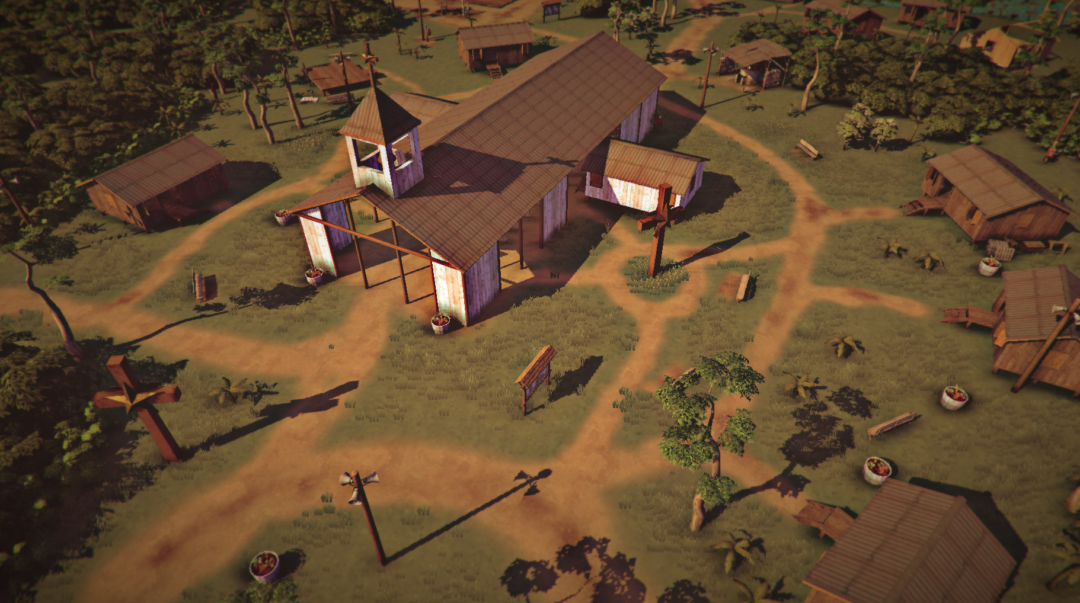 “That just showed me there was more room for experimentation in how people connect to narrative,” Rouse said. “[The Church in the Darkness] is a narrative-heavy game, but not in conventional ways. There are no cutscenes. I just wanted something where players would have a bigger space to play in where there’s a lot of narrative going on, but it’s not funneling you into one specific way to experience that narrative.”

The nonlinear style gives Rouse room to add more content to the game post-launch, and he’s considering making tweaks based on feedback on difficulty and play style, while also expanding the world with more characters and items that can flesh out the narrative. He further plans to use The Church in the Darkness to test how future game ideas he has could be received.

“If people love this way of telling a story and the way we tackled the subject matter, there’s things I would love to do with further procedural generation,” he said. “I would love to experiment.”

The Church in the Darkness launches on Aug. 2 on Steam, PlayStation 4, Xbox One and Nintendo Switch.