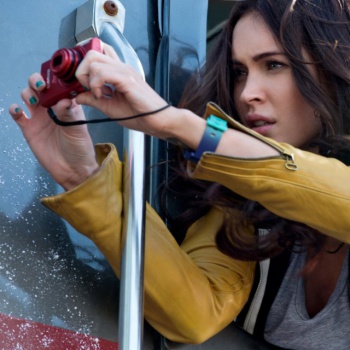 In the sweet spot cross-section of fans who are old enough to care about such things but also shameless enough to admit they still love the Teenage Mutant Ninja Turtles (raises hand), the casting of Megan Fox as April O’Neil in the latest reboot was seen as a harbinger of childhood murder*. If producer Michael Bay weren’t enough, Fox’s involvement seemed to indicate that the beloved no-bullshit, go-getter reporter would be reduced to a piece of eye candy; a damsel in distress waiting to happen. After all, these were Fox’s primary functions in Bay’s Transformers, where the fact that Mikaela was good with cars didn’t stop Bay from bending her over those cars and sweeping a canted crane shot across her grease-stained hotpants.

So even without Bay at the helm (the new flick was directed by Jonathan Liebesman), I went in curious about how it would handle everyone’s favorite yellow-clad evening anchor most of all.

To my surprise, the movie (which, as a lifelong Turtles fan, I found enjoyable, MovieBob’s opinion notwithstanding) handles her admirably. Despite putting her on mini trampoline just minutes into the movie (yes, this really happens), she is the primary driver of plot and never once damseled. The only time the turtles do save her, along with several dozen other citizens, is after she runs into clear danger of her own volition, as any ambitious, foolhardy journalist would. Where female characters of her ilk would typically be required to pass the plot baton to its rightful heroes — The Men — April endures. The turtles are of course central, but the movie puts a simple twist on their well-rode backstories that ties them together in a meaningful way. Even after the brothers ramp up to full Mutant Ninja mode, kicking Foot and dropping one-liners, April always has an important role to play, right through the final scene.

Yes, you heard right. Megan Fox in a Michael Bay production is a Strong Female Character.

For all its admirable work in this regard, the flick can’t help but remind us that, yes, Megan Fox is a girl and, oh, boy, have a look at her. Will Arnett’s sole function in the movie is to stumble over himself trying to date her. Mikey can’t go two seconds in the same frame without playfully quipping about her dateability like the worst bro in your high school graduating class (“She’s so hot I can feel my shell tightening”). It never gets creepy or predatory, but it sure does get laid on thicker than 99-cheese pizza.

*I don’t actually believe in this and neither should you. Your childhood is still intact regardless of new interpretations to the bad things you liked before you developed tastes. 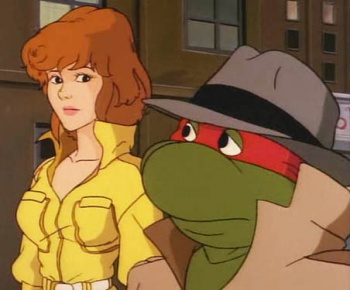 During the much-advertised action set piece down a snowy mountain, April has to lean out the window to grab a something or release another. Arnett’s Vernon Fenwick warns her of the danger until realizing the perfect view of her ass that her position has afforded him. He changes his tune. It’s the only time Liebesman ogles — unlike Bay, who managed to make an object out of every woman to enter frame — but he ogles nonetheless.

The near-miss got me thinking. I’ve always assumed April O’Neil was a Strong Female Character — strike that. Let me rephrase: I’ve been a fan of Donnie, Raph, Mikey and Leo and therefore April since long before I had ever heard the phrase “Strong Female Character” or understood its meaning. Surely she was one, though, right? Even from a young age I recognized her innate value: She didn’t take no for an answer. She got up in the face of the chief of police. She could hang with the guys. She loved pizza. Hell, as a wayward journalism major in the making, Young Boy me was probably more influenced by her than I realized, regardless of gender.

The truth is that no TMNT fan older than 25 exists without being refracted through the rosy red lens of nostalgia. I knew of April, of course, and had the basics of her character implanted deep within my brain, but it occurred to me that I didn’t actually know her as a character from an objective, adult perspective anywhere better than the Megan Fox incarnation I had just witnessed.

Was April O’Neil a Strong Female Character? It was time to access the archives.

Though she is certainly a character, is undoubtedly female, and is intermittently strong, the history of April O’Neil reveals that she’s never been written in a way that puts the whole package together (until very recently, as it turns out).

In the original comic, she’s a scientist and research assistant to Baxter Stockman, arguably her brainiest incarnation. Of course, after realizing Stockman’s evil intentions, he tries to kill her with his Mousers and the turtles save her immediately. She requires periodic rescuing from there out, but at least goes on to train under Master Splinter (though she also turns out to be her father’s drawing brought to life — shit gets weird in the comics).

The original cartoon introduced the primary contradiction of Ms. O’Neil: at once a woman bold enough to stick her nose in dangerous business, and a woman who needs saving at a rate of once per episode. Her yellow jumpsuit, at least, I’m told is gender neutral. 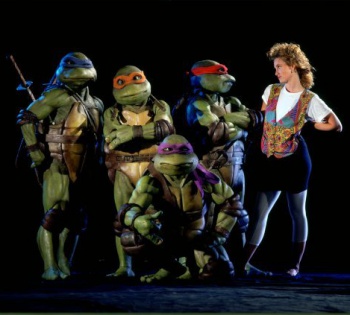 In the original live action movie, we meet April at her most hard-headed, getting tossed out of the office of the chief of police. I thought there for certain, in what is still the best TMNT movie, that April would be at her strongest. Instead, after her initial discovery, she functions as a provider of sanctuaries: Her apartment, until it’s destroyed, and her father’s Hampton farmhouse until the turtles are recovered and again ready to kick ass. Rough and handsome Casey Jones, as he is wont to do, steps in as a love interest surrogate, since the turtles are, ya know… teenagers. That’s gross.

The live action sequels — which are barely worth mentioning — are more of the same. In Secret of the Ooze, the turtles crash in her apartment while they look for another sewer, and in TMNT III she gets lost in feudal Japan, from which the turtles must save her. It’s not even clear if she’s still a reporter.

In each interpretation, as a person, April functions as an audience surrogate. She is people, like us, and she becomes friends with the turtles, as we would like to. But as a woman, April functions as a token. With very few exceptions, she is the only female character in the TMNT universe. She’s therefore left to oscillate between self-sufficient career woman and damsel in distress, mother figure and love interest, Splinter’s fresh pupil and delicate flower who faints at the sight of him.

Perhaps the April that gets it best is the current Nickelodeon series. She’s not quite a scientist of her own, but a research assistant in her father’s lab (a la the original comic). She isn’t uniformly bemused by the turtles’ actions, speaking up when they get it wrong. Eventually, she takes up martial arts tutelage under Splinter. Perhaps most importantly, she’s a teenager for the first time. If nothing else, this makes the inevitable crush from one of the four teenage turtles less weird (Don, in this case), but also puts her on their level and clarifies the confusing sex interest / sister / mother figure carousel her character normally rides.

When I add it all up, though I was disappointed in the ways the latest reboot thwarted its own good intentions, Megan Fox’s April O’Neil is a close second. If there’s a sequel, maybe Liebesman will resist the urge to ogle with the camera for a joke and hopefully April will have more to do than provide turtles a place to crash and a pretty girl to save.

Maybe then we’ll have the April O’Neil we’ve always expected, but never had.