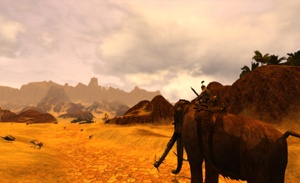 This week’s release of Age of Conan: Hyborian Adventures underscores once again how incredibly difficult it is to launch a high-quality massively multiplayer game. While a few titles dominate the playing field, it is far easier to recall the deluge of titles that barely scraped by, failed outright or were never even brought to market than to recall the handful of MMOG games that succeeded. The success stories are headlined by World of Warcraft, both Everquests, Dark Age of Camelot, and Ultima Online, and to that I might be persuaded to hand over honorable mentions to Lord of the Rings Online, Eve Online, Asheron’s Call, City of Heroes and a smattering of others. On the flip side, however, we have Auto Assault, Asheron’ s Call 2, Vanguard, Imperator, Planetside, Star Wars Galaxies, Mythica, The Sims Online, Shadowbane, Myst Online, Tabula Rasa, Horizons, The Matrix Online, and on and on it goes.

In such a volatile and uncertain business, it is not at all surprising that companies are hesitant to innovate. It is among the most expensive endeavors in gaming to bring a AAA massively multiplayer game to market, particularly one backed by a coveted license, and to risk all that on a few daring design concepts seems like a poor bet when the chips are already stacked against you. Nevermind that supposedly sure bets with traditional mechanics populate the list of failures at roughly the same ratio to those who dared to be different, the MMOG industry is just not one willing to take big chances.

Age of Conan, while it has enjoyed an encouraging launch, has been touted among the more innovative titles to hit the mainstream, though in reality it really brings very little to the table that hasn’t been tried before. The concept of action combat is unique in its particular implementation here, but not in the broader context. Obviously Planetside, which was more shooter than MMOG, offered action driven gameplay far before AoC, and even Tabula Rasa and Dungeons and Dragons Online changed the dynamics of traditional auto-attack in somewhat similar ways to Conan. DDO also shares AoC’s story-driven elements and while Conan revels in the bloodiness of its M rating,scantily clad women offering innuendo and bloody decapitations are not exactly new territory for video games in general, even if the MMOG industry has proved slow to grow up.

This isn’t a criticism of Age of Conan, but an argument that the game, despite appearances, is playing it as safe as any game that’s come before. It’s well respected IP with a familiar interface, predictable pricing models and the level and skill-tree based advancement profiles that have been with us since the birth of the genre. There are a few modifications to the trappings on which the game is built, certainly, but no one who has played Everquest or World of Warcraft wouldn’t feel immediately at home in this game. There were probably bigger visions for what Age of Conan might be, but the realities of a difficult market, the need to live under the shadow of Blizzard and the growing fan interest during the game’s development probably encouraged the decision makers to begin playing it safe more often. 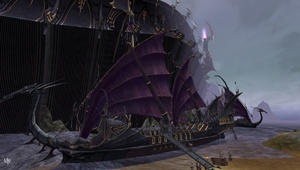 A few months ago, I spoke with EA Mythic’s Mark Jacobs about the MMOG industry, and he was both optimistic and realistic about the industry. “We’re on a down period,” said Jacobs. “Name one game that’s been really successful since World of Warcraft came out. People are looking to Age of Conan and Warhammer [pictured, right] to be successful and prove that someone else can be successful besides WoW.”

None of this is meant to imply that World of Warcraft has killed the MMOG industry, a point of view to which some leap. In fact, Jacobs himself said in our conversation that blaming WoW for the struggles of the MMOG developer is a special kind of folly. “No online game has ever killed another online game,” he says, stating it not as an opinion but a law. While it can make things more complicated, in the final analysis, blaming WoW for killing a game, much less a genre, is nonsense.

As for Age of Conan, the supposed innovations that will in the long-term define the distinctions between this game and others will have their opportunity to shine and be judged, but those aren’t nearly as important to success as players would have you believe.

The great triumph of WoW is in its absolute polish. The functionality of the interface, the client, the server and the game mechanics are ultimately what sets the foundation for creating a great game. WoW, from every angle, screams attention to detail, from the way the combat works to the depth of the original content to the smoothness of the UI. Ultimately, the basic mechanics of the MMO G re fairly bland, even boring, and streamlining every process while developing a polished gameplay progression that keeps the player engaged is the biggest key. In the end, give me a smooth client and a polished gameplay and you’re halfway home.

Sean Sands is a freelance writer, one of the co-founders of Gamerswithjobs.com and runs a small graphic design business with his wife near Minneapolis. When not writing about gaming, he can often be found playing videogames and pretending to call it work.