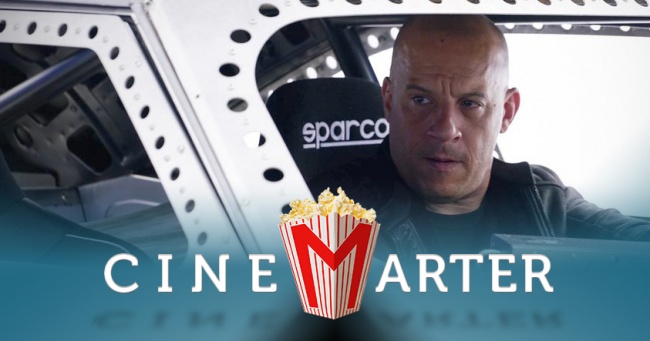 A decade ago, if you would have said the next step for the Fast and Furious movies might be to go to space, you’d be stopped in your tracks and your sanity would be questioned. Now, if feels like the next logical progression. The franchise continues to push its over-the-top nature with the latest installment, The Fate of the Furious, by adding more explosions, more ice, more characters, higher stakes, and a couple of alignment turns in hopes of holding our attention for more than two hours.

The result? It’s about the dumbest thing imaginable, but it’s also a lot of fun. Fans of the franchise know what they’re getting into at this point: Lots of cars driven fast, family, ultra-lame platitudes about how to live one’s life, family, callbacks to previous movies, family, ridiculous stunts, and family. The Fate of the Furious has all of that – and family! It lacks the emotional depth that came from Furious Seven and the death of Paul Walker, but it’s still a fun time and if you’re already “in,” you’ll have a good time with this one, too.

The plot involves Dominic Toretto (Vin Diesel) being coerced into turning on his team of racers, hackers, trackers, and Romans by Cipher (Charlize Theron), who has something with which to blackmail him. It’s a spoiler to say what – the movie hides it for a while – but if you pay really, really, really, really, really close attention, you might catch the film foreshadowing it. (Hint: Letty asks Dom about children in an early scene.)

So, the remaining members of the team: Hobbs (Dwayne Johnson), Letty (Michelle Rodriguez), Roman (Tyrese Gibson), Tej (Chris Bridges), and Ramsey (Nathalie Emmanuel) are recruited by Mr. Nobody (Kurt Russell) and joined by Deckard (Jason Statham) in order to stop Dom and Cipher from (1) stealing nuclear launch codes and (2) stealing a nuclear submarine. Scott Eastwood also joins the team as Mr. Nobody’s assistant. They make up a bunch of derogatory nicknames for him and he acts as the incompetent punching bag for most of the film.

The Fate of the Furious is a fun ride, and if you’re already on board, you’ll have a good time.

The film is filled with car stunts and set pieces involving cars, because in this universe that’s the only way to do anything of importance. Funnily enough, the two action scenes that don’t involve cars might be the best two. One’s a prison break featuring Johnson and Statham, and the other one is a fight on a plane with Statham carrying an important package – one on which he constantly has to check. It’s really fun. The car stuff is enjoyable, too, but the movie peaks with the Statham scene.

What holds The Fate of the Furious back from the heights achieved last time out? Well, despite going for some form of emotional resonance, it comes across as intentionally cheesy melodrama, not sincere. Maybe that’s impossible to attain at this point – the franchise is a self-parody right now, and it doesn’t exist in any reality where real emotion exists. The only time it worked last time was because of a real-life situation; when it tries to do it in-universe, it can’t succeed. It also might be impossible to top that tower-to-tower scene from Furious Seven. While we get a few “well, I haven’t seen that before” moments, none of them are as impressive as that one.

Dominic Toretto’s heel turn also doesn’t make for as enjoyable an experience. There’s little intrigue that comes from the “why” of it all – it’s clear he’s being blackmailed; it’s not immediately known why, but that doesn’t really matter – and keeping him away from the rest of the cast means all of the “team” scenes feel really lacking. They might’ve been fine missing one of Brian and Dom; missing both, they struggle to get into a rhythm, and the only pairing that really works is the one of Johnson and Statham. Much of the rest falls flat – there’s too much immediate change and with two core members removed it doesn’t work.

Still, here’s what you need to know: The Fate of the Furious is a fun ride, and if you’re already on board, you’ll have a good time. If you can’t jive with its over-the-top action, self-parody wink-wink-nudge-nudge jokes, and penchant for mentioning “family” at every quiet moment, it’s not the movie franchise for you – and it never has and probably never will be. These are loud, dumb, and silly movies. I wouldn’t want them any other way.

Bottom Line: The Fate of the Furious is exactly the dumb, loud, silly, and entertaining movie one should expect it to be.

Recommendation: You like the previous movies? See this one. You don’t? Skip it.