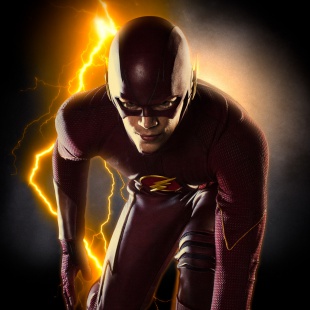 But dumb isn’t necessarily bad, so long as this thing doesn’t take itself too seriously.

I’ve been trying to figure out how I feel about the pilot for CW’s The Flash since I saw it late Saturday night during a Hall H presentation at Comic-Con. So congratulations, because I’m going do so in this review. You’re welcome.

On the one hand, this show has a lot of stuff that should have me so excited I can’t contain myself. It’s densely packed with DC mythology, starting with an implied appearance by [a major spoiler] and ending with the implication that this series intends to build to the Flashpoint crisis crossover*. In between, we get S.T.A.R. Labs, Iris West, the introduction of Weather Wizard as The Flash’s first villain, and a few other blink and you’ll miss it references that suggest this show is aimed equally at comic fans and the CW’s target demo of brodudes and chillgirls.

At the same time, it somehow doesn’t get bogged down by fanservicey shoutouts. It has a tight origin story that neatly ties everything together without being too pat (the Speed Force is apparently not part of it, alas), a seriously great supporting cast, some genuinely impressive action, and decent special effects. And though it’s a spinoff of Arrow, it feels like it’s more directly following in the footsteps of Smallville, with absolutely no attempt to lessen the essential hokiness of The Flash as a character. Good stuff.

But on the other hand, all of this is glued together by some of the dumbest dialogue and pacing I think I’ve seen in years – only the pilot for The Last Ship could give it a run for its money.

The plot is as pure and distilled – and hackneyed – as origin stories get. In brief: As a child Barry Allen (Grant Gustin) is a small, skinny kid who demonstrates an affinity for defending the victims of bullies. He is witness to the death of his mother by what appears to be some kind of electrical event, and then witness to his father (John Wesley Shipp) being arrested for the crime and sent to prison. Raised by family friend Detective Joe West (Jesse L. Martin), he becomes best friends with and harbors a secret love for Joe’s daughter Iris (Candice Patton) and as an adult he works as a forensic scientist for the Central City PD.

Obviously, the show is called The Flash and the pilot wastes no time getting us to the establishment of his super powers. One night, Dr. Harrison Wells (Tom Cavanagh) of S.T.A.R. Labs, a media darling thanks to his scientific and business acumen, hosts a major social/media event to celebrate the activation of a particle accelerator. But on the big night, something goes horribly wrong and the device explodes, killing several people in the audience and sending waves of energy into the sky. This causes a freak lightning storm, and one of the bolts strikes Barry, who happens to be in his lab at the time. He’s electrocuted and splashed with chemicals lying around, and is put down hard. He wakes up from a coma 9 months later, fully healed thanks to what turns out to be his new powers.

From here, we see him learn to use his new powers, meet new allies and reestablish old ones, and encounter his first enemy. The episode climaxes around Barry’s attempt to stop the villain in his first appearance as The Flash, in which he outruns a tornado and uses his super speed to unravel it. Which, OK, sold.

Rest assured I’ve left a lot out. For instance, to even name Joe West’s detective partner is to reveal a major spoiler – the information is out there, and as we get closer to the series premiere I’ll discuss more openly, but for now I’m going to respect spoilerphobes. Just know that with the exceptions of Harrison and Joe West, practically every named character is from the DC universe, and while there are some liberties taken, the inclusion of most of these characters is not coincidental. If what you look for in a superhero show is a dense dive into the source material’s mythos, The Flash is probably going to make you very happy.

Also, like I said above, the action sequences, kinetic, frenzied affairs that suit the title character well, are kind of awesome. And it’s weird to compliment a show like this for making someone whose superpower is running REALLY fast credible, but this show manages to do just that. Further, a lot of the cast, especially Tom Cavanaugh, Jesse L. Martin, and John Wesley Shipp are for the most part wonderful. I have to admit, it’s kind of awesome, in a low budget television kind of way.

So, what the hell is my problem? Maybe it was the way Barry Allen is kind of a pathetic, friendzoned idiot, which is supposed to make him endearing but just makes him creepy. Maybe it’s the fact that Grant Gustin, otherwise perfectly fine in the role, is about 5 years too young to be a forensic scientist. Or maybe it’s just the fact that literally every single line of dialogue, every character beat, hell, even major plot points, is literally something you’ve seen or heard hundreds of times. There’s even a perfunctory appearance by Green Arrow so unnecessary that it feels as cheap as the cameos in The Simpson’s Spinoff Showcase from 1997. It’s like someone turned TV Tropes into a drug and the show’s writing staff are all currently suffocating in their own vomit.

And really, the production seriously erred by making Barry Allen so friendzoned. In addition to, like I said, being creepy, what’s more worrisome is that it suggests we’re going to have to endure like 20 episodes of him pining over her, not telling her how he feels, being politely and privately mopey, dragging the plot to a standstill. It’s maddening to saddle a show that might not even get a full season with such a waste of a plot.

But mainly, the pilot feels like a two hour movie edited down to 45 minutes; everything is rushed and perfunctory, and ultimately kind of forgettable. It’s all played with broad strokes, and the result is something like a romantic comedy that starts with someone saying “I love you!” and the other person saying “OK I LOVE YOU TOO” and The End.

Then again, pilots often suck, a lot. Gustin is perfectly fine when he’s playing the hero, the cast is well-chosen, and I can’t stress enough how refreshing it is to see the hokey squareness of Barry Allen/The Flash played completely straight, in an optimistic way. So I guess I’m going to watch the second episode, if only to see whether or not they manage to make this thing a little less dumb.

* Yeah, Flashpoint gave us The New 52, but it’s still a cool event.