This is how I used to do it: 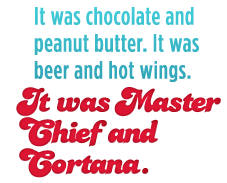 I’d sit on the couch, ensconced in blankets (if wintertime) or bare-chested and lightly dusted with Cheeto pollen (if summertime). I’d have coffee and/or an alcoholic beverage close at hand. I’d clutch the controller with a grim, arthritic grip, my eyes facing forward – utterly hypnotized by whatever game played on the screen in front of me. It was purely a solitary affair. If my wife (at the time, girlfriend) came in, I might ignore her. I might nod in her general direction. Were she to make a small suggestion – “Did you try pushing that boulder?” – I might snarl and hiss like a spitting cobra. Or, like a child trying to learn how to do somersaults in the backyard, I’d vomit forth a petulant scream: “Don’t watch me! I’m doing it by myself!“

Sure, I might be playing with other people halfway across the world, but internally? At home? The living room was my sanctum, the glow from the television my firelight. I was alone, a rogue warrior, a ronin with a game controller.

I fooled myself into thinking I could play Portal without wanting to wing my controller through the TV screen like some kind of non-returning boomerang. Sure, I could play the first couple of levels, but it wasn’t long before my only solution to the game was to gnaw on my Xbox in the hopes of forcing it to submit.

Wife came in. Asked to be handed the controller. “Can I try?”

I rolled my eyes and tossed her the controller. “Pssh. Sure, like you can do any better.”

Turns out, I was right for once. She couldn’t do any better.

Except her failure was wholly different from my own. My problem wasn’t that I couldn’t manage the manual dexterity of the game. I could jump and fall and fling portals around like it was nobody’s business. I just couldn’t figure out where to go or what to do beyond making recursive portal loops through which to plummet. My wife‘s problem was an animal with different stripes: she knew exactly what she needed to do to solve the puzzle, but couldn’t accomplish the “jumping around like a monkey” necessary to achieve said solution.

It was then that our eyes met and maybe, just maybe, we really fell in love for the first time.

It was chocolate and peanut butter. It was beer and hot wings. It was Master Chief and Cortana.

Gingerly she handed me the controller.

“Are you thinking what I’m thinking?” she asked.

“I am,” I said. Unusual, because I wasn’t thinking about sex or bacon or, I dunno, sex-bacon. “I’ll handle the jumping and the button-mashing. You handle all the thinking.”

And that’s how the Husband and Wife Videogame Super Team was born. On that day, we played a marathon session of Portal, rocking the metaphorical pants off of insane Aperture matriarch, GLaDOS. When the Jonathan Coulton musical end credits began to crawl, we basked in the warm glow of a union far truer than that of piddly pish-posh earthly marriage. This unification was both cosmic and eternal. 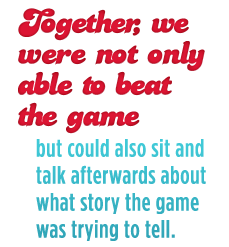 Afterwards, we had some cake.

Okay, I’m probably making that last part up. Because the cake is a lie.

Portal was only the first.

Other games have since fallen to our mighty combination of brains and brawn – any time the words Action and Puzzle smash together to form a videogame baby, my wife and I are there, hands on our hips, capes flowing in the wind, ready to conquer.

I mean, Braid? Come on. If either of us were left to conquer that twisted time-traveling Mario-on-mescaline adventure, we’d both have head butted the game console to death. But together, we were not only able to beat the game but could also sit and talk afterwards about what story the game was trying to tell. Instead of spending our time apart in isolation of our individual hobbies, suddenly we were sharing this time together – even if together we were spinning ourselves dizzy trying to figure out just what the hell was going on in that game.

World of Goo – there’s another one. That one we approached with a different tack. Both our computers were in the office, and we sat back-to-back playing the game at the same time. We’d share strategies on building our quivering goo towers, and occasionally hover behind one another.

About a month ago, we traveled and had to suffer a handful of overly long plane flights. On such a plane flight, it’s often easy to hunker down over your chair and nest in total seclusion – maybe you mutter to one another over a $15 bag of pretzels, but for the most part it feels like you’re just trying not to die from a pulmonary embolism. Not us. Nope. Right there on the plane we pressed our rings together and formed the married-couple equivalent of Voltron, baby; I whipped out the iPad, cranked open Cut the Rope or Little Things and together we turned each game into chopped liver.

One guy in our row looked over at us and asked, “What are you doing?”

Duh, mister. We’re playing games, fool. Together! As one!

Hell, it happened just last night. I decided it was time to pop the cherry on Assassin’s Creed 2 (I know, I’m behind, shut up). It’s a game with robust visuals and an engaging story, so the wife is happy to check it out. But she’s not just along for the ride. She is no passive observer. As I’m gamboling about Renaissance Italy like a drunken monkey in Klan robes, she’s pointing to places to hide, she’s helping me solve puzzles, she’s showing me doors and doctors and spots where I can leap to my almost-death into a hay cart. (When Ezio makes such daring dives, we both swoon and share in the dizzy vertigo.) I’m just the dipshit who knows how to waggle the stick and stab the buttons. Without her? Ezio would probably be pickpocketing whores and monks for six hours.

It’s the kind of multiplayer I really love, because it makes me love her all the more.
The great thing is that some games facilitate this kind of play as part of their mechanics. I don’t mean “husband-and-wife” play (which sounds like some gross Kinect Kama Sutra game, which you know somebody is developing somewhere), I just mean the kind of play that allows a bunch of people in a room to play on a single screen. 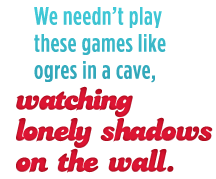 Super Mario Galaxy, for instance, lets one person play an additional Star Pointer in Co-Star Mode – your partner can then collect stars and even shoot them at enemies and can also grab hold of enemies so they don’t move. It’s a simple mechanic, but one that elevates the game and makes local multiplayer all the more intimate and engaging (though imperfect). The Halo games have owned split-screen first-person-shooting for a good while now. And certainly you have Rock Band or Guitar Hero (our band was, if I recall, the “Meedly-Meedly’s”), plus all the crazy play-together games born of the Wii Remote, the Sony Move, or the Kinect.

For the record, I don’t actually mean that anybody not playing games in this mode is somehow “doing it wrong.” All I’m suggesting is that videogames have become an unusually isolationist affair. It wasn’t always this way: Anybody remember being crowded around a Mortal Kombat machine? Taking turns and egging each other on, yelling out combo moves? Remember Contra, or Double Dragon?

Try to get back to that. Bring someone else into the room with you. Does your husband or wife not understand why you spend so much time playing videogames? Find games they like. That they respond to. Share the controller. Share the thought space and the thinking behind the game itself, talk about the stories, the experience – share it in the same way you might share a great movie or a piece of pie (or, alternately, cake and sex-bacon). Bring friends and family to the couch, in front of the screen. We needn’t play these games like ogres in a cave, watching lonely shadows on the wall.

This is our normal mode of play, now: Whether she’s helping me find snipers in Modern Warfare or answer the unknowable moral conundrums found in Fallout: New Vegas, videogame time is no longer something we do in isolation.

As a postscript, the wife and I recently discovered that our Husband and Wife Videogame Super Team will no longer be merely a duo – we will soon be accepting a third member into our household, thus turning our duet into a bonafide trio (and if you include our dogs, a full-scale Justice League of Videogame Ass-Kickery). Now, if only we could figure out a way to get a controller into our inevitable infant’s hands.

Chuck Wendig is a novelist, a screenwriter, and a freelance penmonkey. He’s written too much. He should probably stop. Give him a wide berth, as he might be drunk and untrustworthy. He currently lives in the wilds of Pennsyltucky with a wonderful wife and two very stupid dogs. He is represented by Stacia Decker of the Donald Maass Literary Agency. You can find him at his website, www.terribleminds.com.