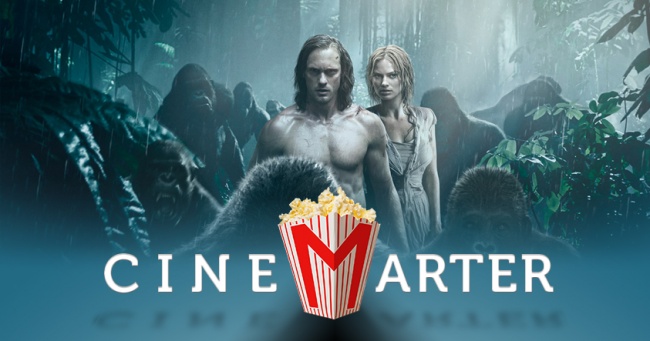 Tarzan is one of the most prominent and enduring characters in cinema history. We’ve had dozens – if not hundreds, according to some sources – of these things, which is pretty incredible. Now, he used to be on our screens more frequently; in recent years, his appearances have become more sporadic. If superhero fatigue is just setting in, Tarzan fatigue set in a long time ago. It feels like there isn’t much more to do with this character, save for turning him heel and having him attempt to cut down the jungle to make paper.

If you have managed to completely avoid the character, his story breaks down like this: as a baby, Tarzan and his parents were shipwrecked in a jungle, his parents didn’t make it, and he was raised by gorillas. He falls in love with Jane, and then adventures happen. In this one, they go back to Britain, and Tarzan (Alexander Skarsgard) gives in to his heritage and birth name, John Clayton, who is actually the heir to a significant fortune. He and Jane (Margot Robbie) become perfectly cultured and spend their days doing whatever they want; they’re rich, after all. 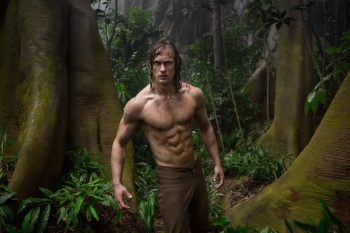 The plot kicks in when we learn that the Congo is being threatened by the potential of slavery. So, Tarzan heads back in order to find out what’s going on, bringing Jane and George Washington Williams (Samuel L. Jackson) with him. As it turns out, they fall into a trap by Captain Leon Rom (Christoph Waltz), who captures Jane, kills some of Tarzan’s Congolese friends, and tries to lure the Lord of the Jungle into the lair of Chief Mbonga (Djimon Hounsou), with whom Tarzan has a blood feud, in exchange for some diamonds.

So, Tarzan has to try to both save the Congo and Jane by running through the jungle, fighting with a couple of creatures, making a few back-and-forth quips with Samuel L. Jackson … and not much else, actually. Despite seeming like a moderately complex setup, the plot could probably be told in a 30-minute episode of the Disney cartoon The Legend of Tarzan, not in 110 minutes of a CGI-heavy film. In fairness, a good chunk of that time is spent in flashbacks, explaining to us the story of how Tarzan became, well, Tarzan – unnecessary, given the character’s pop culture prominence.

The Legend of Tarzan falls very much into the “unnecessary” category of movies.

I just talked about the CGI, of which there is a significant amount. Most, or all, of the animals have been made with computers, and the majority of the film takes place in front of a green screen. The animal CGI is great, especially for the gorillas. Between this and The Jungle Book, 2016 has been a great year for computer-generated animals. The green screening is less effective, especially if you see the movie in 3D, where there are a couple of scenes that are noticeably off – something that shouldn’t be the case in a $180 million movie.

We should also probably be able to expect more from the plot, characters, and action, given the budget and the rich history of our protagonist – and the use of real-life people, like Leon Rom and George Washington Williams. Tarzan is supposed to be this civilized man who slowly reverts back to his primal nature, but that doesn’t really come across on the screen. Jane is feisty but little more. Williams is comic relief and righteous, but ultimately doesn’t even need to be there. And Rom is profit-hungry, existing just so we have a villain.

It’s possible that we wouldn’t care too much about the characters if this was a pure action movie, filled with lots of jungle battles involving Tarzan, animals, evil soldiers, and local tribes. But for the main portion of The Legend of Tarzan, we just watch Tarzan trying to get from Point A to Point B, all while Rom holds Jane as a captive. It’s broken up by brief spurts of action, and lots of flashbacks, but it’s mostly just really dull. Tarzan should be fun, but outside of a couple of late-game jokes, he’s just boring – and the movie, as a result, is as well.

The Legend of Tarzan falls very much into the “unnecessary” category of movies. It plays everything safe, takes way too long to get to the point, and doesn’t feature much of anything that we haven’t seen before, save for some better-than-average animal CGI and Alexander Skarsgard’s abs. (I’ve never watched True Blood; maybe they’ve been shown often.) This is a dull movie that’s thin on plot, characters, and action. We’ve seen lots of Tarzan movies before; this is simply another forgettable one to throw into the mix.

Bottom Line: There are a few entertaining moments, but The Legend of Tarzan is a largely dull and underplotted movie.

Recommendation: It has Tarzan and he sometimes swings from vines. That might be enough for some people.