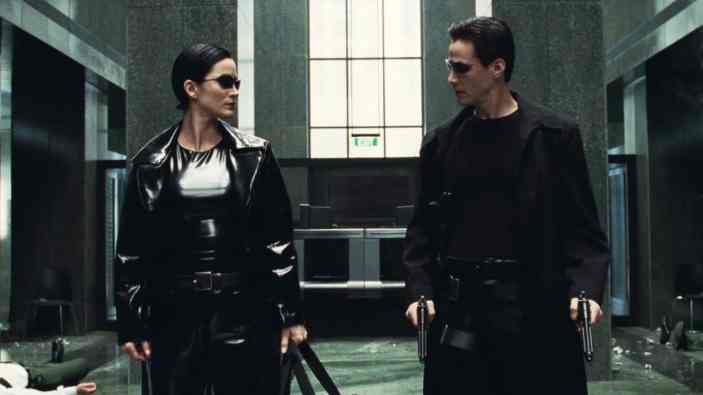 Ready for some long leather jackets, ’90s sunglasses, and Keanu Reeves knowing kung fu? If so, then this is your week. A recent advertisement, first spotted in Liverpool, has revealed that the trailer for The Matrix 4, officially titles The Matrix Resurrections, will be landing this Thursday. Since then, Warner Bros. has reconfirmed this and updated the website for the film with a few teasers, though we don’t know what time officially. Of course, if you’re an NFL fan, then it’s pretty easy to assume that the trailer will premiere sometime during the opening game of the season, which starts at 8:20 pm ET.

The choice is yours. pic.twitter.com/e1reOfj3P4

The Matrix Resurrections is bringing back much of the cast of the original trilogy, including Keanu Reeves and Carrie-Anne Moss, and throwing in some new stars as well with Jessica Henwick, Christina Ricci, Yahya Abdul-Mateen II, Priyanka Chopra Jonas, Jonathan Groff, and Neil Patrick Harris all joining. Harris can be heard on the website speaking in a very Mr. Smith cadence while trying to convince us to take the blue pill. Lana Wachowski, half of the sibling duo who directed the original films, is returning to direct the movie with her sister, Lilly Wachowski, advising but not being directly involved.

The trailer already played at CinemaCon earlier this year and unless it’s been changed drastically should reveal a bit of plot and our first looks at a much older cast. The new movie reportedly reboots things a bit with Neo and Trinity taking the blue pills and having forgotten their adventures in saving humanity from the robots. However, Neo (going by his original name, Thomas Anderson) has been having dreams, and that’s when Yahya Abdul-Mateen II arrives acting like a young Morpheus (hear him on the site too). Just what’s going on and why is the film basically rehashing the original? We’ll just have to wait and see.

The Matrix Resurrections will release December 22 in theaters and on HBO Max.