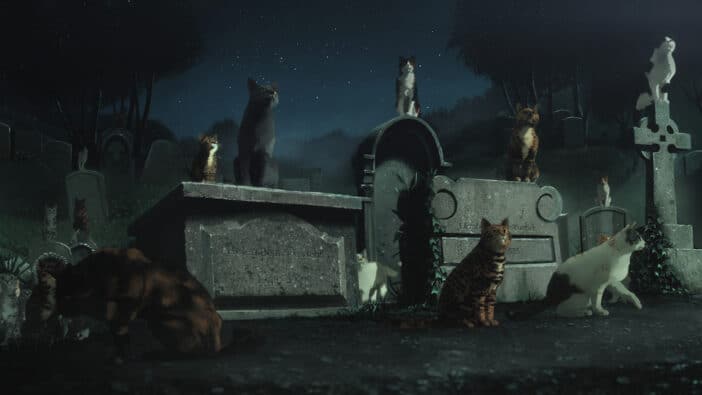 The Sandman is a hit for Netflix, satisfying the majority of critics and fans and offering a worthwhile TV adaptation of the Neil Gaiman comics masterpiece. However, as our own esteemed critic Darren Mooney has noted, a question has lingered of how or even whether Netflix would handle some of the smaller, self-contained stories of The Sandman. Today, Netflix has provided a bold answer. Netflix has surprised fans with the release of The Sandman episode 11, a bonus episode titled “A Dream of a Thousand Cats/Calliope,” which does indeed adapt the comics stories “A Dream of a Thousand Cats” and “Calliope” from Dream Country.

“A Dream of a Thousand Cats/Calliope” is divided into two parts catering to each story, with the former being an animated story directed by Dutch animator Hisko Hulsing. The “A Dream of a Thousand Cats” cast is dense with names, including Sandra Oh, James McAvoy, David Tennant, Michael Sheen, and Neil Gaiman himself. Hulsing provided the following statement about crafting an animated Sandman story for episode 11:

We endeavored to make the animated version of ‘A Dream of a Thousand Cats’ as mesmerizing and hypnotic as we could by utilizing the magic of real oil paintings on canvas. We combined the paintings with classically drawn 2D animation, based on realistic 3D animation of telepathic cats in order to create a trippy world that feels both grounded and dreamy at the same time. Untold Studio’s in London created the breathtaking 3D animation of the cats. The wonderful 2D animation, oil paintings and stylizing were all done at Submarine Studio’s in Amsterdam.

Meanwhile, “Calliope” stars Melissanthi Mahut as the titular character, and they snagged Derek Jacobi for Erasmus Fry, among other actors featured in the cast. Regardless, The Sandman episode 11 is a pleasant surprise from Netflix for the fans, including for, yes, our esteemed critic Darren Mooney.